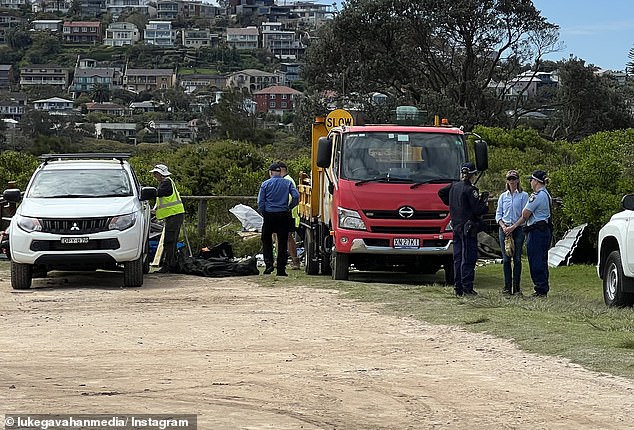 Dramatic video captures the moment police pursue a resident of the contentious “tent city” that has been constructed only yards from one of Sydney’s busiest beaches.

Locals were worried about the homeless camp set up in the sand dunes of Dee Why, on the city’s northern beaches, according to a recent report from Daily Mail Australia.

After video of a fire being built in the sand dunes and of a guy with a thick beard being pursued by police officers close to the temporary camp surfaced on Monday, tensions grew.

Workers from the Northern Beaches Council tore down the tent city on Tuesday “due to public safety concerns,” according to a council spokesman.

Residents of the affluent neighbourhood said that when they strolled down the beach, rough sleepers residing in the temporary shelters threatened and robbed them.

Others have claimed that they use binoculars to observe beachgoers so they may sprint down the dunes and seize abandoned belongings.

According to some stories, people living in tent cities dress up as tradies and prowl around parking lots looking for open homes.

Locals in Dee Why claim they are terrified of the beachgoers and are worried that their presence has harmed the sensitive environment of the neighboring lagoon.

Northern Beaches Council CEO Ray Brownlee stated, “We have been working with appropriate homeless support organisations in a continuing attempt to give help to persons living in the dunes at Dee Why for a number of years now.”

“Homelessness is a complicated subject, and we have tried to treat individuals affected with it in a way that shows empathy and understanding.”

“A violent incident and fire in the Dee Why dunes over the weekend have left Council with no choice but to disperse the camp and remove the mounting pile of trash and other things that continue to pose a fire and safety danger.

“Council is continue to facilitate help to people who have been affected via welfare and housing agencies and explain support alternatives available to them,” the statement reads.

On Tuesday morning, at 9.30am, council employees started removing the dunes.

Residents of the camp saw the removal of their belongings from the location and were informed that they may pick them up later in the day.

They have so far declined the council’s offer of assistance in moving.

Additionally, police were present at the location of the camping removal maintaining order.

According to Daily Mail Australia, following a fire, the occupants of the tent city relocated from where they had previously resided, which was near to the Dee Why Lagoon.

The presence of three tents in the vicinity suggests that the group expanded during the Covid epidemic.

The guy reportedly kicked a police officer in the head as they attempted to arrest him for allegedly setting fire to a shelter in the neighboring “city” of the homeless, according to the council, which made the decision to dismantle the campground.

The guy, 35, was detained by NSW Police on Monday after it was claimed that he lit the tent on fire at about 4.30 p.m.

It was only the most recent in a series of aggressive incidents around the contentious campground.

The 35-year-old male was apprehended by police when they found him at a nearby gas station.

One officer allegedly received a kick to the head during the arrest, and police said they were obliged to deploy capsicum spray.

They claim that immediately after the fire was detected, he also made a knife and lighter threat towards another individual in the vicinity.

The individual was accused of attacking police, setting property on fire, using an offensive weapon with the purpose to commit an offense, and obstructing and restraining police.

The blade and lighter allegedly used in the threatened assault were subsequently discovered nearby and brought for forensic examination, according to NSW.

Later, a 43-year-old male was detained near Dee Why Lagoon and charged with threatening and assaulting police.

The guy is seen fleeing from the five police officers who have surrounded him as he makes his way down to the shore in the dramatic video and pictures taken by witness Luke Gavahan, lukegavahanmedia.

Both men will appear before Manly Local Court on Tuesday after being denied bail.

Whether any of the males resided on the beach has not been established.