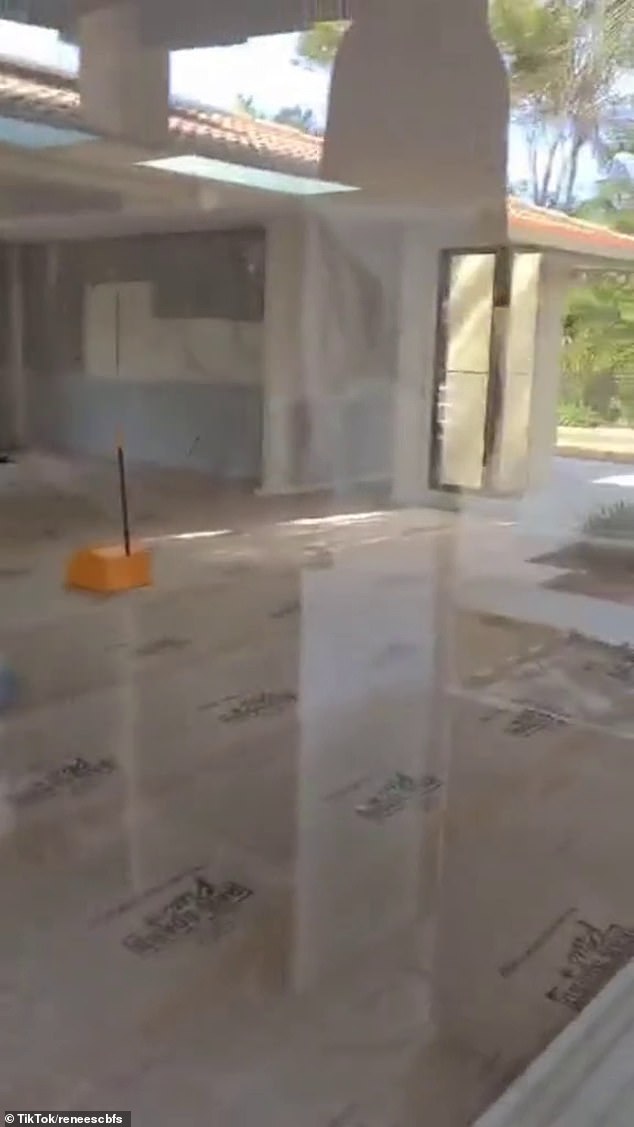 When a family of 15 arrived to what they believed to be a lovely Airbnb, they discovered that it was in the middle of a significant makeover, leaving them stuck on the side of the road.

The residence in Suffolk Park, in Byron Bay, northern New South Wales, had been reserved jointly by four families, but when they arrived last Wednesday, they discovered a “shell” of a house.

The living room was entirely empty, had no flooring, and was set up with brooms and a ladder. A skip bin was seen next to the front entrance.

There was a stove in the kitchen, along with two unconnected cabinets.

The cupboards were covered with a soiled sheet, and the walls lacked paint.

According to Renee, the sister of the person who made the reservation, the house was reserved for a week by 12 people and three infants.

“Today, my family attended this.” Renee submitted a video of the property on TikTok along with the following description: “A totally empty home, in the midst of a huge makeover.”

There was no advance notice, and when they called Airbnb for assistance, the company accused them of lying, refused to help them locate another place to stay, and refused to give them a refund.

“You basically left 12 people and 3 children under 3 standing on the side of the road,” someone said.

Photos for the Airbnb offering depict a newly refurbished house with a pool and an outside seating area, but the actual property was much different.

After initially receiving no communication from the booking site, the families were later informed that they would get a 30% refund for the first three nights of their reservation, or $816, making the total cost of the property $6343.

The family was able to get last-minute lodging, but it cost them almost twice as much as they had anticipated.

“Makes no sense at all. Family had to pay almost twice as much as the initial reservation to get a last-minute reservation at one of the few available spaces, according to Renee.

The family learned that they will get a full refund on Monday, over a week after their arrival, but the owner’s total lack of contact and Airbnb’s tardy reaction had severely hampered their stay.

“We won’t ever use them for another booking.” Although we acknowledge that errors sometimes occur, their attitude has been terrible and heartless,’ Renee added.

While the owners were at fault, according to Renee, the online platform’s reaction was unsatisfactory and they didn’t help with finding other housing.

The reservation had been made six months before, and Renee said that not once had the proprietors neglected to inform the family that modifications had been undertaken.

Renee informed Daily Mail Australia that they had subsequently received a compensation offer for the price of their other lodging.

“We were saddened to hear about this incident,” an Airbnb spokeswoman stated. “We have completely reimbursed the guest and given rebooking help.”

“We have taken proper action against the Host while doing more research, and we have contacted the visitor to provide additional help.” When anything unexpected happens during a visit, our Community Support staff is there around-the-clock to assist.

“Our crew is totally committed to making sure that every stay is a great one for guests, Hosts, and the larger community.”

For this reason, we provided complimentary, all-inclusive AirCover for visitors this year, the most complete travel insurance available. The Airbnb app and website both provide AirCover, which enables users to contact a representative and report problems for our staff to look into.

»Family of 15 discovers their Airbnb under construction when they arrived«