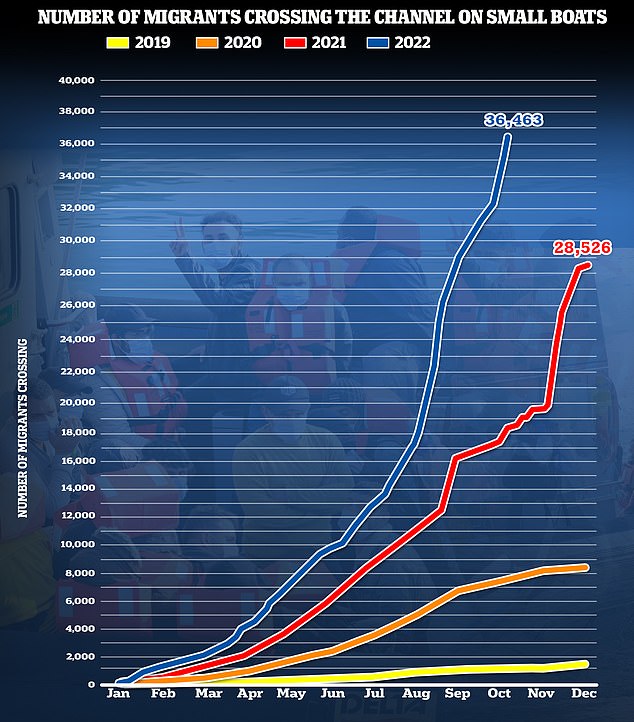 Due to a lack of boats, migrants are reportedly paying people smugglers up to £2,800 per person to enter the UK.

Despite this, 800 more migrants crossed the English Channel yesterday, suggesting that the problems are not slowing down the flow of crossings.

With the most recent arrivals, the total for this year is now 36,463 individuals on 899 vessels, or an average of 41 people per boat.

Additionally, it indicates that more than 75,000 immigrants have entered Britain via the Channel since official records started four years ago.

A BBC investigation found that despite the historically high number of crossings, human trafficking groups in France say they are running out of inflatable boats to make the crossings.

An undercover journalist pretended to be a migrant with a pregnant wife and a two-year-old daughter and was informed that it would cost £2,800 for each person to enter the UK. The human trafficker declared: “I won’t be profitable if I don’t. I’m unable to do less.

Another trafficker warned that due to a shortage of inflatable dinghies and other small vessels, prices will soon rise.

There aren’t enough boats, he said. There is an issue in Germany. We import them through Germany after purchasing them in Turkey. More money is made trafficking people than narcotics.

According to the BBC investigation, migrants have been utilizing a free local bus service in France to get to beaches where human traffickers may assist them in traveling to the UK.

The asylum seekers apparently were led to sand dunes by members of smuggling gangs after using the public transportation to reach Dunkirk, where they were instructed to hide until the boats were prepared.

Despite the difficulties smugglers encountered, 856 individuals yesterday accomplished the dangerous crossing of the 21-mile Dover Straits. Around nine in the morning, the first migrants were taken into Dover, Kent aboard a Border Force vessel.

They waited in line for the bus that would transport them for processing while braving temperatures of 15°C and winds of up to 18mph in the Channel.

The day was spent with crossings. On the beach at Dungeness, at least two groups of asylum seekers were carried ashore by an RNLI lifeboat in the early afternoon.

Immigration officers greeted the about 70 passengers who arrived on the gravel beach, among them women and children. One of them, an older lady, was observed being assisted from the boat.

Additionally, on Wednesday, the French coastguard helped 46 passengers who had run into trouble in the English Channel.

30 stranded persons were picked up at Authie Bay by a coastal patrol boat, while 16 additional passengers were stopped off the coast of Fort-Mahon by a second marine vessel.

The migrants were delivered to the port of Boulogne-sur-Mer, where the departmental fire and rescue service and the border police took care of them.

The most recent arrivals bring the tally for the year to 36,463 individuals on 899 vessels, or an average of 41 individuals per boat. However, a recent revelation claims that traffickers are currently fitting 53 people onto each boat.

1,065 migrants arrived in Britain on Sunday, making it the biggest day this month.

The numbers for this year have already eclipsed those for 2020, when just 8,410 asylum seekers entered the UK, and 2021, when 28,526 persons crossed the Channel by small boat.

51,881 migrants were registered as coming in the UK between January 2018 and June 2022, according to official Home Office statistics. According to preliminary Ministry of Defence (MoD) figures, 23,747 have now been found.

As the government continues to confront legal opposition to its migration strategy to Rwanda, crossings continue.

After identical objections were raised last month, the case of Charity Asylum Aid is scheduled to be considered by High Court justices on Thursday.

While the legal battles are underway, deportation planes are halted.

At a later period, the court is anticipated to provide a decision on all the cases concurrently.

The MoD said that their data came from “active operational systems” and may vary, “including decrease.”

In order to stop illegal immigration, the Home Office said that it will “employ every weapon” at its disposal.

“We will go farther and quicker to combat individuals gaming the system, using every weapon at our disposal to dissuade illegal migration, damage the economic model of people traffickers, and repatriate to Rwanda, those with no right to be in the UK,” a spokeswoman said.

“Migrants who travel through safe nations to reach the UK illegally will not be permitted to establish a new life here,” the statement reads. “Despite the falsehoods they have been given by the people traffickers.”