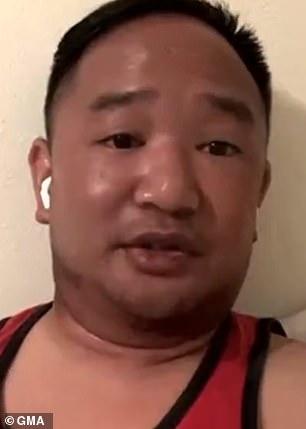 In their first interview since the terrifying experience, three fishermen recovered from the Gulf of Mexico more than a day after their boat capsized reported shark attacks and harsh ocean conditions.

Phong Le, one of the fisherman, narrated how the boat capsized shortly after it started taking on water, and he used their VHF radio to issue a distress call.

Another, Luan Nguyen, related how they managed to tie together two ice chests to act as a makeshift raft and how, by a fortunate coincidence, one was loaded with food and water bottles.

Le said on Good Morning America how he somehow managed to keep his phone undamaged after swimming five kilometers to get cell service and relay his position to a buddy just before the phone’s battery expired. This is how they were saved.

After their 24-foot center console sunk at about 10am the previous day for an unexplained cause, the three guys were recovered on Sunday around 25 miles off the coast of Louisiana.

Eventually, a Coast Guard boat and helicopter located them owing to Le’s text to his buddy, and they were rescued from the ocean.

By the time they were rescued, all three of the guys had hypothermia, and two of them had been bitten by sharks.

You always think that something like this won’t happen to you. Le described how the boat capsized shortly after they saw it was absorbing water on Good Morning America this morning. “You hear things happen, but I assumed it would never happen to me, but it happened,” Le said.

“We made a distress call on the VHF radio and let them know that we had taken on water and that the boat was sinking, and not even seconds after that the boat was approximately halfway under water,” he claimed.

Nguyen described how their life depended on a pair of ice chests that were left floating after the boat capsized.

Tying the ice containers together “was crucial in our surviving,” he claimed. We were able to stay hydrated since one of the ice chests included food and drink.

However, even though they had food to sustain them, sharks soon appeared in an attempt to use them as food. After fending off the fangs of one pursuing shark, Nguyen recalled being left with wounds on his palms.

‘The shark bit the life vest in front of me. When it bit the life vest, it smacked it hard even though it didn’t contact me. He said, holding up his bandaged hands, “I pushed him in the face, and I think that’s where I caught these injuries on my hand.”

Nguyen said, “I don’t really recall, but I shoved him in the face and he wouldn’t go, so I grabbed my two thumbs and stabbed him in the eyes, and he went off.”

Le described how he swam more than five kilometres in an effort to locate assistance while preventing his phone from getting damaged by the water.

He sent a message to a buddy notifying them about the crash and included a snapshot of his position after realizing he had reception.

“There was barely 2% remaining when I emailed my pal the coordinates of my position.” And as soon as I texted it, he started to respond to me, but the phone cut off since my battery was low, he stated.

The Coast Guard was able to approximate the location of the guys after receiving the information from Le’s acquaintance. They were saved two hours after Le sent the message.

Upon being rescued, all of the men were in stable condition, but the Coast Guard confirmed that two of them had shark bite wounds on their hands.

One of the life jackets that the fishermen recovered even had visible signs of a shark tearing it to pieces.

Le said in an interview with Today that the experience has made him want to go surfing again soon.

If I were to go offshore any time soon or in the near future, at least, I’d be more prepared, he said. I’m only thinking about getting better right now, so it’s not in the cards right now.