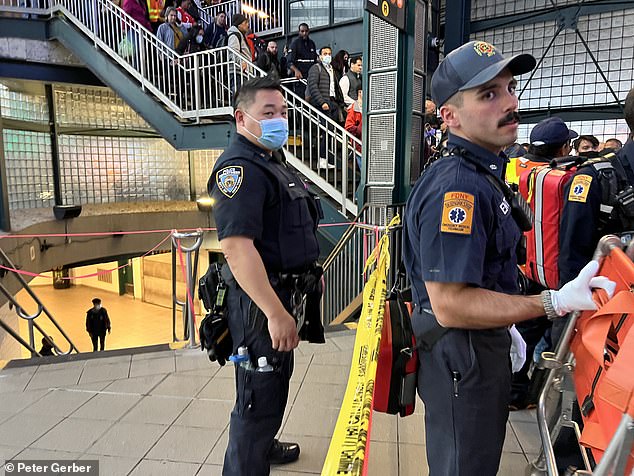 The twelfth person to be pushed into the rails this year passed away after sliding onto the subway lines and being hit by a train in Brooklyn.

At the Jackson Heights-Roosevelt Ave station on 74th Street and Broadway in Queens, Heriberto Quintana, 48, was hit by a F train.

The victim allegedly collided with another individual on the platform, according to the police. After the victim’s phone was dropped over the railroad tracks, a fight broke out between the two.

The victim was involved in the argument and ended up on the tracks, where he was run over by a train.

According to ABC 7, it’s still unknown if the victim fell during the altercation accidently or was pushed. According to police, a suspect is being held.

Despite the high levels of violence and subway pushings that have plagued the city this year, NYC Mayor Eric Adams declared on Monday that the impression that crime in the Big Apple is “out of control” is unfounded.

Two days have passed since a disturbed individual threw a guy at random in front of an approaching train on Saturday morning, leaving good samaritans with just a few seconds to save him.

Near 11:50 am, a horrific occurrence was captured on surveillance video at 149th Street in the Bronx.

The 26-year-old guy was trailed for a few seconds by the pusher, who had wide eyes and unruly hair. After that, the pusher went after the man and shoved him into the path of the approaching train.

As astonished witnesses rushed to the victim’s help, he then left the station.

He was not hurt in the assault because they were able to take him to safety before the train sped through the station.

The NYPD is now seeking assistance from the general public in locating the individual who pushed the victim.

With an average of “six crimes a day” on the subway, Adams said on Monday that he and law enforcement are “fighting the real crime,” which “doesn’t give the appearance that it is out of control.”

Although he acknowledged that there are “too many guns” in New York, he also said that the NYPD has done a “great job” of seizing thousands of weapons.

We are dealing with real crimes—those eight homicides—and the sense of dread that people are experiencing, the mayor said, his voice scarcely heard over the sound of wailing sirens in the distance.

“That impression and the real crime are the mix I have to deal with.” However, we can’t get away with having 3.5 million users of our subway system,’ he remarked.

Despite a sharp decline in attendance, recent data reveals that subway killings are at their highest level in 25 years.

There were never more than five homicides per year on New York City subway trains between 1997 and 2020.

With two and a half months remaining in the year, that number increased to six in 2020, eight in 2021, and it is already at eight.

Despite a 42 percent increase in felony crime, subway usage has practically halved.

Officials are finding it difficult to explain the rise in crime.

When services like homeless shelters and mental health outreach programs disappeared, many have blamed the COVID-19 epidemic.

Others claim that liberal cities like New York and San Francisco’s loose bail laws are to blame.

Before the epidemic, New York State implemented extensive bail modifications in an attempt to decrease the number of low-level offenders being housed in jail.

It allowed many repeat criminals to return to society.

The election of District Attorney Alvin Bragg in New York City, who instructed his staff to avoid setting cash bail if possible, made matters worse.

They still haven’t made an impact on the rising crime.

The 15-year-old Jayjon Burnett was shot dead on Friday amid an altercation between two groups on a Far Rockaway A train in New York. The mayor’s remarks on Monday came only days after that incident.

18-year-old Keyondre Russell is being jailed without bond on murder charges in connection with the death, but he insists that he is the true victim and that Burnett fired the first shot because he was acting in self-defense.

“We eliminated killings, eliminated shooter victims, and we are still working.”

“Our police officers did a fantastic job, but everyone has a part to play.”

“Judges must keep shooters in prison; legislators must ensure that no laws are passed allowing them to re-enter society; we must pursue these instances,”

There are far too many gins on our streets, and those that are there are also in our metro systems and schools.

There are too many firearms on our streets, they are everywhere, and we are just innocent New Yorkers.