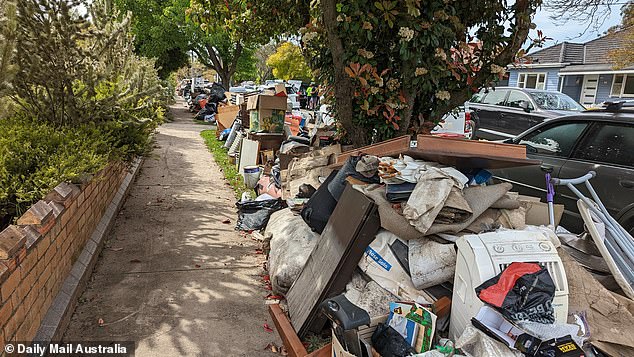 A few minutes’ walk from Melbourne’s downtown, residents in flood-ravaged streets continue to live among the wreckage of their destroyed lives days after the floods receded.

The flood victims in Maribyrnong started losing their cool on Tuesday, complaining that their local authority had abandoned them.

Residents of Oakland Street awaken to the odor of muck and despair downstream from the Anglers Tavern, which was itself destroyed by the Maribyrnong River last week.

Neighborhood residents are in no better shape since the previously affluent suburb’s streets now resemble a dirty, third-world slum.

Workers from Maribyrnong City Council were fast to clear up the muddy streets with high pressure hoses, but the median strips are still piled high with decaying trash and broken household goods.

The Maribyrnong rose to a height of 4.18 meters as a result of heavy rain and a saturated catchment, flooding more than a hundred homes in the municipality’s low-lying tidal section.

Residents claim that the council has abandoned them in the mud, allowing them to fend for themselves.

For the last 15 years, Antony Nguyen has resided on Oakland Street.

The majority of his family’s belongings were still piled outside his home and beside the sidewalk on Tuesday.

While his neighbors who were as concerned about cleanup helped him, Mr. Nguyen said that ultimately, it was “every man for himself.”

“The government has given us nothing.” Nobody from the council has been seen by us. He told Daily Mail Australia, “They’ve been too preoccupied with the main strip and getting the road going.”

Trucks were supposed to go in on Monday to clean up the mess, but when they showed there, all they grabbed were the trash cans.

They have begun the cleanup process someplace, but I’m not sure where. Not on my street,” said Mr. Nguyen.

Anita Najdovski was working to make room for a tow vehicle down the street.

Her three automobiles, including a classic Corvette, were all totaled, but her house escaped most of the damage that her neighbors experienced.

Ms. Najdovski expressed her frustration at the council’s reluctance to interact with flood victims.

It is a smack in the face every morning. seeing this shambles. She reportedly told Daily Mail Australia, “It’s like Beirut.”

If the council had not given homeowners the assurance that it would take care of the damage, according to Ms. Najdovski, she would have hauled in her own skip on Saturday.

It was trash day, so they cleaned out our bins on Monday morning. We’ve only ever seen the council once, she added. It’s insane, I found it hard to believe. due to the very high rates here. We cover everything, yet they are absent when you need them.

Local officials and council members allegedly promised quick action after the accident, but residents complained it was “all for show.”

“I understand that it’s all part of their shtick.” stating that this is what will occur… But the focus is solely on the publicity,’ local Zac added.

“I don’t expect much from them, but the one thing I want is for them to make this stuff obvious,” you can say.

The rubbish pile continues to draw opportunistic’scumbags’ and criminals to the region.

Some individuals are utilizing the area to dump their own trash, despite the fact that inhabitants swear they don’t mind others digging through their muddy stuff and carting it away.

According to Ms. Najdovski, “They are picking up what they want and discarding their own belongings.”

Looters are still taking anything the floodwaters haven’t wrecked.

The amount of savage looters who have descended on the devastated region, according to Mr. Nguyen, is a serious cause for worry.

“There were so many people on the street yesterday.” They began scaling fences. The home of my neighbor was robbed early yesterday morning. He responded, “They’re going inside the homes.”

Residents are now being compelled to protect their own houses because looting has become so terrible.

I had to shut myself inside at night, in fact. To block it, I drove my vehicle all the way back to the fence and pushed furniture up against the front door. Mr. Nguyen said, “My family is afraid.

While the majority of locals get specialized flood insurance, some unfortunate locals who chose not to did so and lost everything.

My whole home was newly redone less than a year ago. All completely new furnishings,” Mr. Nguyen said. “You can never be too insured.” always below. Who could have predicted such a thing? ‘

It was revealed by Daily Mail Australia on Friday that a wall erected around the neighboring Flemington Racecourse may have contributed to the flooding in the region. The cause of the flooding is yet unknown.

The flood wall between the southern portion of the track and the Maribyrnong River was built by the Victorian Racing Club in 2007.

On Sunday, Premier Daniel Andrews made the announcement that Melbourne Water will examine the Labor government’s 2004 decision to approve the flood wall.

On the streets, many are still more worried about when and how they will be able to resume their regular lives.

Grandfather “Jim” stated, “I’m really unhappy with the council.” They ought to have arrived immediately and taken care of things. When they arrived, they cleaned the streets, but what about all this toxic material? ‘