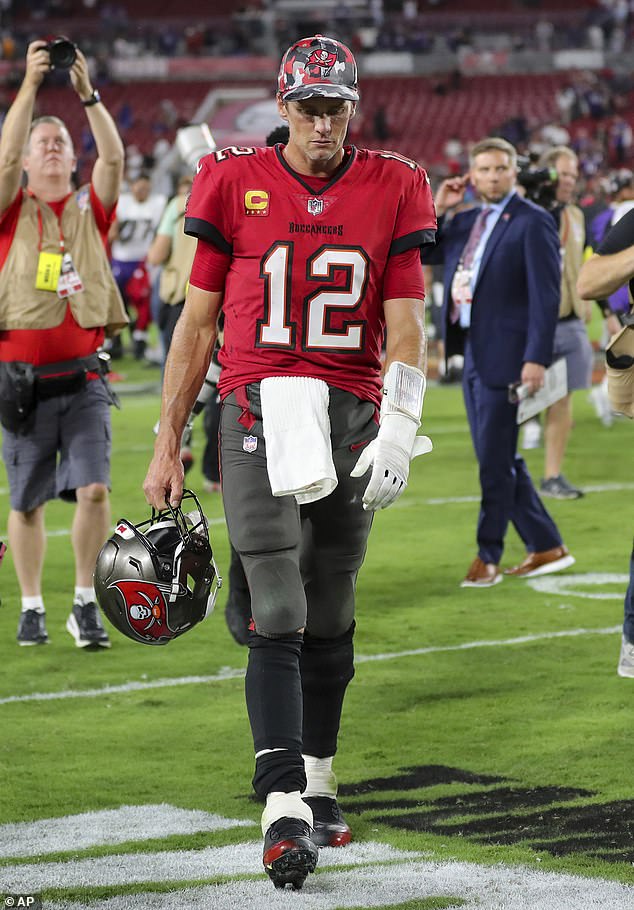 According to rumours, the quarterback of the Tampa Bay Buccaneers and his supermodel wife Gisele Bündchen have engaged divorce attorneys 13 years after saying “I do.”

This week, it was claimed that Bündchen, age 42, issued an ultimatum to Brady, threatening to break their marriage, resulting in a difficult defeat.

Last week, Brady, 45, and his squad suffered a crushing defeat at the hands of the Carolina Panthers. On Thursday, they went home to face the Baltimore Ravens. Tom Brady Sr. was present at Raymond James Stadium in Tampa to cheer on his son, but Gisele Bündchen was nowhere to be found.

The couple, who share two children, had been living apart ever since Brady’s revelation that he would not retire, with many thinking that this was the cause of their ongoing separation.

The difficult loss on Thursday follows reports that Bündchen issued an ultimatum to Brady that threatened to destroy their marriage.

‘Gisele informed Tom that he must quit football to spend more time with his family, or she will leave him forever,’ a source told Us Weekly, per Page Six.

She does not wish for him to continue sustaining injuries and be unable to enjoy life in the future. She is acting on behalf of her family.

After apparently fighting about his choice to ‘un-retire’ from his football career, the couple’s marriage reportedly began to disintegrate.

A source at the time noted, “Gisele has always been the one with the children.” The agreement was that he would retire to focus on his family, but he later changed his mind.

Brady shares children Benjamin, 14, and Vivian, 9, with Bündchen. He also has a 15-year-old son, Jack, with his ex-wife Bridget Moynahan.

This year, the Tampa Bay great announced his return after only 40 days of retirement, which was a startling turn of events.

This month, it was rumored that Bündchen hired Florida’s top divorce attorney after her relationship with Brady deteriorated into a “very unpleasant” state.

According to reports, the supermodel began preparing for the lengthy struggle by recruiting Tom Sasser, whose previous clients include Tiger Woods and Jeff Gordon.

As speculations about her marriage continued to circulate, Bündchen was spotted running errands without her diamond wedding ring earlier this month. This week, Brady was also observed to be ringless.

According to Page Six’s sources, the presence of divorce attorneys has made the tense separation between Tom and Gisele “extremely unpleasant.”

A source stated, “They are ready to battle.” It will take some time to distribute their vast fortune and property around the globe.

Recently, Bündchen has been jet-setting while Brady spends the football season in Miami. Since Brady’s announcement that he would not be retiring, they have been living separately, with many speculating that this was the cause of their ongoing rift.

Initially, he abandoned football in order to devote more time to his family, stating that Gisele “deserves what she needs from me as a wife, and my children deserve what they need from me as a father.”

However, a source confirmed to DailyMail.com in late September that Brady’s decision to return to his favorite sport had no effect on their physical separation.

In a September interview with Elle magazine, the mother-of-two briefly discussed her emotions on the subject, stating, ‘I feel really fulfilled as a mother and a wife. And now it shall be my turn.’

Giselle continued, ‘I’ve done my part by being there for Tom. I relocated to Boston and focused on providing a nurturing atmosphere for my children to grow up in, as well as supporting him in his endeavors.

‘Seeing my children succeed and develop into the lovely little humans that they are, as well as him succeeding in his work, makes me happy.

‘At this point in my life, I believe I’ve done a good job. I have a lengthy list of things I must and wish to accomplish. I feel more connected to my purpose at age 42.

Despite the strained relationship, Brady stated that he had no immediate plans to retire. He stated, “I love the sport and my teammates, and I want to continue to do an outstanding job for our club.” No retirement in my future.’

This season, Brady’s wife of 13 years has not attended any of his Tampa Bay Buccaneers games.

In February, Brady stated that he was retiring, only to reverse his decision a few weeks later.

“His decision to re-enter the workforce has caused marital discord. Gisele has always been the primary caregiver for her children, a source informed Page Six. The agreement was that he would retire to focus on his family, but he later changed his mind.

Recently, Brady confessed that achieving a work-life balance has been difficult for him.

In addition to marital troubles and game losses, Hurricane Ian has stalled construction on the power couple’s Miami mansion.

The couple intended to build a home in the Indian Creek Country Club neighborhood of Miami for themselves and their children.

According to the Post, they spent $17million for the site and an extra $10.12million for the construction of the custom mansion, bringing the total cost to close to $30million.

Brady and Bündchen are said to be evaluating the division of their assets, including their real estate holdings.