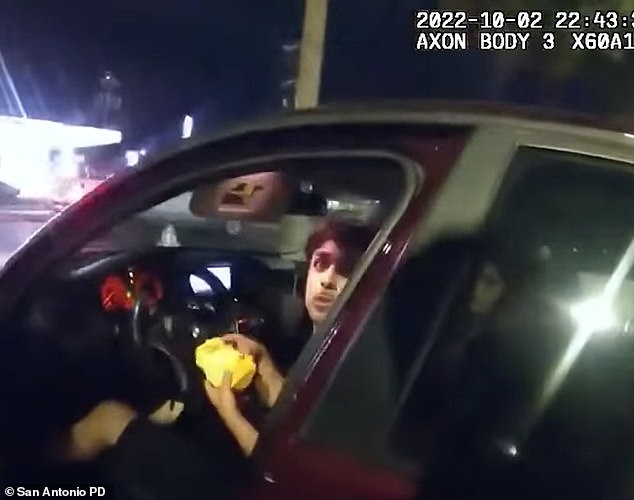 Two counts of aggravated assault by a public servant have been brought against James Brennard, the San Antonio rookie cop who shot teenager Erik Cantu multiple times and put him on life support.

Charges were brought against Brennard, 25, after a criminal investigation into the shooting in which he suddenly shot Cantu, 17, as he was eating a cheeseburger in his car, according to San Antonio Police.

According to his family, Cantu is currently on life support after the shooting damaged several of his organs.

Cantu is still sedated as his body takes the time it needs to heal, with the life support equipment essentially operating his lungs.

Cantu has a long road to rehabilitation, according to Powers, but his family is appreciative of the prayers they have received.

Brennand, a married former soldier, was recognized for his proficiency with a pistol when he was a student at the police school.

After the incident, Erik Cantu was taken to the neighboring University Hospital for treatment. Brennand performed CPR after the shooting and waited for the ambulance.

In a statement, Powers said, “Erik and our family would like to thank all of our family, friends, the great city of San Antonio, and everyone around the world for sending their heartfelt prayers and blessings.”

Erik is still in a serious condition and is under close observation. Multiple bullets’ penetration caused injuries to a few major organs that required surgery to repair. Erik is currently on a system that keeps his lungs functioning and is still taking a lot of sedatives in the hopes that they will lessen his discomfort and pain.

He has a fantastic medical team that has been diligently caring for him round-the-clock. Erik is having difficulty, and we are aware that his recovery won’t be simple. Every second counts, and the uncertainty hurts a lot. Please remember Erik in your prayers and thoughts, we urge everyone.

He had just been working for seven months at the time of his termination and was still in his probationary period, which precludes him from filing an appeal.

The adolescent was originally charged by law enforcement with escaping arrest and assaulting a police officer, but those allegations have now been dismissed.

According to Texas law, the teen’s family was only allowed to see him in bed sometimes since he had charges pending against him.

Brennand said, before the footage was made public, that Cantu only came under fire after hitting him with his vehicle. The latest video proves the contrary.

Following a reported incident that had nothing to do with Cantu, Brennand was summoned to the McDonald’s. The policeman seemed to have mistaken the kids’ automobile for one that eluded him the night before when he arrived at the area.

When Brennand tried to pull that automobile over because its license plates did not match the vehicle, it rushed away from him.

Brennand walked up to Cantu’s maroon automobile and yelled for help, but he swiftly attempted to resolve the situation on his own by opening the door.

No definitive word from the police on whether Cantu’s automobile was stolen.

The incident in which Brennand abruptly ordered Cantu to exit the vehicle is captured on camera.

Cantu tried to put the vehicle in reverse while he questioned the officer’s instructions, but Brennand was caught by the door.

The bodycam video shows Cantu reversing as Brennand opened fire and shot into the driver’s side of the car. The officer can be heard exclaiming “guns fired!” on his radio.

Brennand continued to fire at the rear of the car as Cantu tried to drive away after pulling out of the parking space.

After after, a block from the gunshot, the teenagers were discovered outside the car.

Bexar County District Attorney Joe Gonzales said during a news conference on Friday that after seeing the footage, his office had urged the police to dismiss the charges against Cantu.

Cantu’s status was also updated by Gonzales, who said: “This young guy is in critical but stable condition in the hospital.” His parents’ ability to stay in touch with him for a lengthy period of time has some problems. I am aware that it’s a precarious scenario.

“Utilizing my discretion,” he said, “I have chosen to dismiss this case for the time being so that his family may remain at his side.”

The young man’s health and his parents’ capacity to remain at his side are my current concerns, and that is why we have taken the actions that we have. Once SAPD has submitted the whole of the matter to us, we will make a determination.

I applaud the San Antonio Police Department for taking the step they did in firing this person since it is obvious that they were concerned. The district attorney said, “It is laudable that members of the department felt it necessary to fire this person.

Cantu works at The Wash Tub, a vehicle care company with a San Antonio location, according to his Facebook profile.

Cantu worked at the company for three months earlier this year, according to his former boss Christopher Montalvo, who spoke with KSAT.

Cantu visited the shop for a vehicle wash two weeks earlier, according to Montalvo. Good laughter, just your typical human antics, he remarked. Nothing very grave. I never felt uneasy about (Cantu). He always treated me incredibly well and showed me his respect. He consistently followed my instructions, and he put forth a lot of effort.

The fact that Cantu had been shot was unknown to the supervisor. A KSAT reporter played the footage for Montalvo, who commented: “That’s hard to see.” That scares me. I’m really at a loss for words. Cantu seemed terrified. He seems frightened. He is unaware of what is happening. He was simply eating in his vehicle. Personally, I thought things didn’t look right there.

Cantu has a strong passion for automobiles, as seen by the several photos of him in front of a Dodge Charger that comments on his Facebook page imply he had just acquired in May.

His grandma had written: “My kid, I’m really thrilled for you. I only ask you one thing, drive cautiously and take care of yourself, love you loads, God is good.” under the photograph.

I appreciate that, Liz, he said in his reply. I’ve always thought of you as my mother. I was always treated as if I were your son by you. I’m excited to share it to you.

He shared a picture of himself operating a Ford Bronco in February. He published a video of himself in the backseat of a Ferrari in March.

Trust in the LORD with all of your heart and do not rely on your own understanding, Cantu advised in the Intro portion of his website. Proverbs 3:5, KJV.