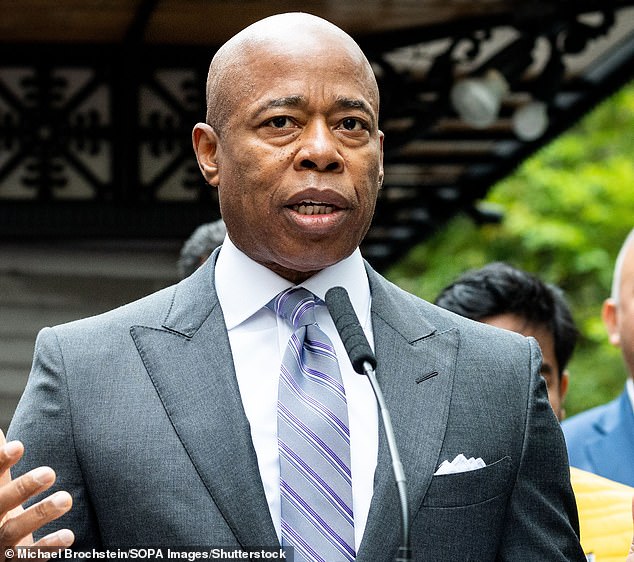 Mayor of New York City Eric Adams is relocating his “tent city” to Randalls Island after recent images revealed flooding at its prior site, which was constructed just two weeks ago at Orchard Beach in the Bronx.

According to the Daily News, Bronx Borough President Vanessa Gibson had earlier indicated that the tent site was “not the optimum position” and was prone to floods.

Another issue raised by Gibson in September, improved access to public transit, was also mentioned by Adams on Monday.

After DailyMail.com exclusively revealed that Democrats in El Paso are covertly busing migrants to New York City, the action was taken the following day.

This new site will provide 500 asylum seekers a brief reprieve since it is less likely to flood and is nearer to public transit, according to a statement from Adams.

As stated by municipal delegate Fabien Levy, “Moving to Randalls Island will be more cost-effective than remaining at Orchard Beach and building the essential flood-mitigation measures to make the property completely functional.”

It was intended for the area to hold up to 1,000 migrants at once.

Now, the tents will be situated over 12 miles nearer Manhattan.

Between Manhattan, Astoria, and the Bronx sits Randalls Island, which mostly houses a sewage treatment facility and open areas for leisure.

It’s a speedy turnaround considering that workers were still erecting tents in the rain on Monday.

According to people acquainted with the property, the new location will be a scaled-down variation of the original idea for Orchard Beach.

Levy told the Daily News, “This has the capacity to expand, but we’re going to start off with 500.”

There has been no information released on how the cost of the larger Orchard Beach site would alter as a result of the relocation, which was previously estimated to be roughly $150 million.

According to the mayor’s office, 3,000 new immigrants have arrived in the previous week.

Diana Ayala, a Democratic councilwoman on Randalls Island, expressed her worries about this site to the Daily News.

Ayala added, “I’d want to get out and inspect the region before taking a stance, but I do have worries,” stressing that there may also be floods in this area.

Mayor Adams said in a statement a few weeks ago that “this is not an ordinary homelessness situation, but a humanitarian catastrophe that needs a different solution.”

Once finished, the beds will be arranged in rows inside heated tents, according to authorities.

However, immigration activists have claimed that the design was poorly thought out even before construction started.

The executive director of the New York Immigration Coalition, Murad Awawdeh, said: “While we recognize there is urgency in meeting the very real needs of asylum seeking families while our shelter system remains over-burdened, we believe that any effort to open a temporary relief camp at Orchard Beach is ridiculous and likely to cause more harm than good, especially as the fall turns into winter.”

We worry that what was supposed to be a temporary fix may turn into a bad long-term fix, Awawdeh added.

Adams also discussed the possibility of temporarily hosting migrants aboard cruise ships towards the beginning of September.

That notion was also swiftly refuted.

Most critics agree that Adams’ theories seem to be opportunistic.

There are two potential locations for the 13,00 refugees to be housed in New York City, with Randalls Island being one of them. The second site is yet to be chosen.

In a news statement published in September, Adams said that his idea was evidence of his “moral obligation” to the weekly arrivals of Venezuelan refugees in New York City.

At the time, Adams said, “Now, more than ever, it’s evident that we’re dealing with a humanitarian disaster brought on by human hands.”

Homeless groups are outraged at the mayor’s choice to seem to prioritize migrants above New Yorkers in need of a place to live in addition to how the move will play out in the long run.

The COVID-19 epidemic was one factor in the overall decline in the number of persons spending the night in New York City’s homeless shelters in recent years.

Due to the reduction in shelter capacity as a result, the system was not ready for the rapid increase in those in need of assistance.

The mayor of El Paso, Texas, is coordinating with the White House to shuttle migrants from the border city to important destinations, including New York, according to an exclusive revelation published on Monday by the Daily Mail Online.

DailyMail.com went to the border to see the wave of migrants firsthand. People crossed the Rio Grande river on foot, surrendered to border agents, were processed, and then were put on buses sent north by local authorities.

R.J. Hauman, an analyst with the Federation for American Immigration Reform (FAIR), a policy organization, stated, “The hypocrisy on exhibit right now by Democrats and coastal elites is a spectacle to see.”

Transporting undocumented immigrants into American neighborhoods is either ethically acceptable or cruel. Just who sends them and where they go matter.

El Paso City spends between $250,000 and $300,000 every day on providing food, arranging transportation, and housing migrants in hotels or shelters. Last month, a transit center was constructed in an industrial area on the city’s northern border of the desert.

There, wealthy migrants may arrange their own aircraft or buses for continuing their journey. Newcomers who are short on money are given free rides on charters. Since August 23, more than 115 of these buses have transported more than 5,000 arrivals to the north.

According to authorities, El Paso’s buses run in tandem with those in New York and Chicago, who are informed in advance of arrivals and given the identities of the migrant passengers on board.