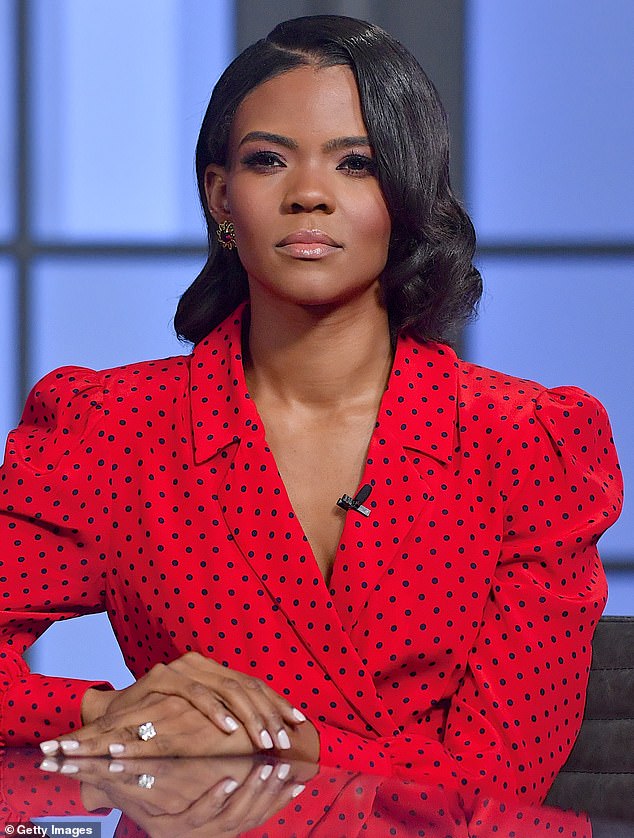 According to Candace Owens, black Americans should be more concerned that obesity, abortion, and “black on black” violence kill more people in the community than police.

The right-wing broadcaster and West both donned White Lives Matter t-shirts while attending the Yeezy season 9 fashion show in Paris on Monday night. Models, including Bob Marley’s granddaughter, also wore the shirts while walking the runway.

Since then, the two have been under criticism from a variety of celebrities, including Gigi Hadid, and campaigners who claimed that by adopting the tagline, they were endorsing violence.

In her DailyWire+ podcast on Tuesday, Owens called the claim that adopting the phrase detracts from the Black Lives Matter movement a “lie” and denounced the “vicious” internet trolls who targeted her and the rapper.

She continued by saying that the main killers in the black population were also high rates of abortion, “black-on-black violence,” and obesity.

The musician Lizzo was then targeted by Owens, who said: “We should have placed a White Lives Matter T-shirt on Lizzo.”

Perhaps a lot more attention might have been drawn to the fact that obesity is killing black Americans.

According to Owens, “I usually start off every episode with a question of the day…

The main question is: Why did Kanye West and Candace Owens wear White Lives Matter T-shirts to his Yeezy Season 9 presentation last night in Paris?

“A White Lives Matter T-shirt, which should be implied, right? Black lives matter. People of Color Matter. Lives Matter in Asia. It ought to be inferred.

Nevertheless, individuals are upset and abusive online because they cannot believe that we have the gall to discredit the [Black Lives Matter] movement, which is a fabrication.

If black lives matter, then the issues we have been discussing on this program and the issues I have raised throughout my whole political career would be receiving attention rather than the t-shirts, correct?

These real data are what is important, she said. And a couple of them are listed here…

The largest fall in the black population since the arrival of the first black slaves may be attributed to abortion in America.

They advise the same black folks that when a Planned Parenthood facility closes, they should be indignant.

You understand what we ought to have done?

We ought to have given Lizzo a White Lives Matter T-shirt. Perhaps a lot more attention might have been drawn to the fact that black Americans are really dying from obesity.

Obesity is the leading cause of death in America…

You remember when Black Lives Matter warned you about the police shootings?

“And gave you the impression that the cops were killing thousands of black guys,”

“I believe nine unarmed Black guys were murdered by police in the year 2020.” Nine in number.

However, a large number of individuals are dying from obesity, and black women are the most likely to be obese.

So, the number one killer is obesity, and naturally, black women are at the top of the list with 56.9% obesity.

We shouldn’t discuss it, however. Why? Considering that it was devoid of a T-shirt with the slogan “White Lives Matter.”

“Discuss criminality. If it’s not a police officer, nobody wants to speak about it…

People don’t want to discuss the reality that black people are killing other black people, according to one.

Who cares, however, as the person wasn’t sporting a White Lives Matter T-shirt?

Owens was present for the Yeezy season 9 fashion show on Monday in Paris, which drew ire for having models walk the catwalk wearing Kanye West’s t-shirts.

West and right-wing broadcaster Owens were both seen wearing one of the shirts.

Since the YZY Season 9 event in Paris on Monday, West has posted and removed a number of statements to his Instagram account. One of them read: “EVERYONE KNOWS THAT BLACK LIVES MATTER WAS A SCAM NOW IT’S OVER YOU’RE WELCOME” [sic].

The outspoken celebrity seemed to be confirming a lack of trust in the cause, which has a history of organizing large-scale public demonstrations against what is seen to be the oppression of minorities across the globe, as well as having leaders who misappropriate cash.

Karefa-Johnson was wearing a multicolored mishmash of an outfit when West, 43, shared a photo of her on Instagram with the caption, “This is not a fashion person.” Ask Trevor Noah about you when you talk on Ye Ima.

The insult seems to have been directed at Noah, who recently called West’s public conduct against his ex-wife Kim Kardashian and her former partner Pete Davidson “terrifying to watch.” West then referred to Noah as a racist slur.

Ye focused on Karefa-footwear, Johnson’s which look to be Women’s Black Veneda Carter Edition Boots by Timberland, in a different post. I KNOOOOOOW ANNA HAAATES THESE BOOTS, West wrote.

Karefa-Johnson had written a rant about the “White Lives Matter” t-shirts shown on Kanye West’s runway and had uploaded it to her Instagram account. She described the collection as “very disrespectful, aggressive, and deadly.”

She began her letter with the words “I’m furious… gathering my thoughts” before calling West’s acts “indefensible conduct.”

Later, she claimed that she was one of those who “suffered in that room” and was still processing the “trauma” of the event.

Karefa-Johnson was swiftly defended by supermodel Gigi Hadid against Kanye West’s online criticism, stating, “You wish u had a portion of her brains [sic].”

You’ve got no clue, lol. She could be the only one who can rescue you if there is any real meaning to anything you do.

As if being invited to your program should prevent someone from expressing their opinion? Lol. You’re an idiot and a bully, she continued.

Karefa-Johnson and Hadid have already collaborated, and earlier this year, the stylist told ELLE that the two had a “genuine relationship” and a “deep regard and trust” for one another.

Jodie Turner-Smith, an actress, also criticized Kanye for his most recent outburst, writing on her Instagram Story: I thought he stated he was attempting to unite people?

The Daily Mail has contacted Condé Nast, parent company of Vogue, and Karefa-Johnson for comment.

Several people in the music and academic communities have spoken out against Kanye’s concert in relation to the event itself and the “White Lives Matter” t-shirts.

Boosie Badazz, an outspoken rapper known for bragging about hiring prostitutes to perform oral sex on his son, then 12, and nephew, then 13, called out West in the hip-hop community.

“After everything we’ve gone through as a race, why do you put this insulting s**t on?” questioned Boosie. You don’t care about how black people have suffered and died at the hands of white people, and you claim that Bush doesn’t like black people… seriously n****a.

While posting a photo of West and Owen on Twitter, radical leftist Temple University professor Marc Lamont Hill wrote: “Kanye West’s choice to wear a “White Lives Matter” shirt is horrible, dangerous, and reckless.” Some of you will jump to his defense. You should contemplate this question: