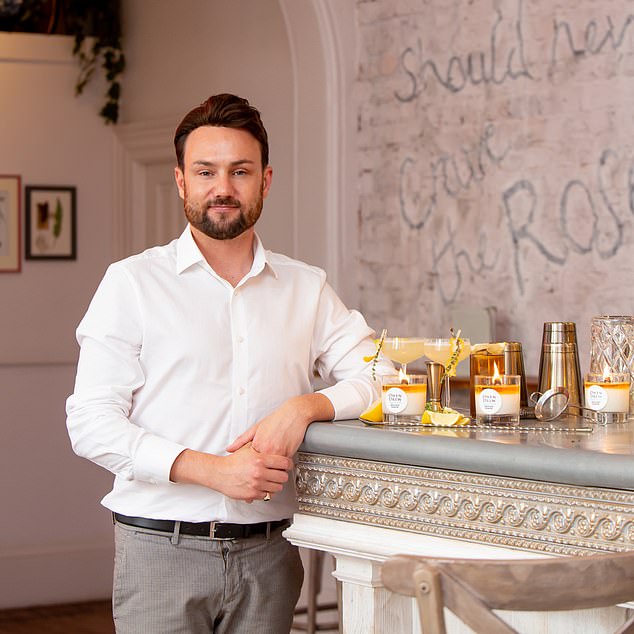 A 36-year-old Dragon’s Den entrepreneur who got a £50,000 investment for his scented candle business passed away “peacefully at home.”

Drew Cockton, who abandoned his high-pressure corporate job to focus on his candle-making business and appeared on the BBC1 show last year, wowed the Dragons with his candor about his mental health struggles.

Owen Drew’s success skyrocketed after receiving a £50,000 investment from Toulker Suleyman, and he even secured the endorsements of socialite Paris Hilton and reality star Gemma Collins.

His mother stated that she is “really, absolutely heartbroken” to learn that her “beautiful boy” passed away peacefully yesterday at home.

Kate Drew posted on Facebook, “We are saddened beyond comprehension.” Life will never, ever again be the same. Rest in Peace, sweet boy.

Friends and family have described Mr. Cockton as a ‘kind and compassionate individual’ with a ‘golden heart.’

Owen Drew, a vegan fragrance company, was launched in 2017 by a 36-year-old from Wirral, Merseyside, who abandoned his high-pressure corporate position to transform his candle-making passion into a business.

He claimed to have designed the world’s most expensive candle to commemorate Prince Harry and Meghan Markle’s wedding in 2018, after the bride’s floral arrangements and bouquet were made public. In 24 karat gold pots, they retail for £750 and contain some of the world’s most costly oils and fragrances.

Last year, Mr. Cockton pitched to the Dragons on the BBC show and wowed them with his candor about his bipolar disease, so much so that retail magnate Touker Suleyman decided to invest £50,000 in exchange for a 30% interest.

Mr. Cockton revealed in an interview with FEMAIL last year that he could have continued in an unsatisfying office job if he had not fought his own difficult health struggles, which led to a diagnosis of bipolar disorder.

He told MailOnline, “I’m inherently quite creative, and there’s no doubt that certain characteristics of living with bipolar disorder have aided rather than hindered me.”

‘My risk perception is extremely low; it’s not something I worry about, therefore it serves me well and propels me forward.

Mr. Cockton made the world’s most expensive candle to commemorate Prince Harry and Meghan Markle’s wedding in 2018. (pictured)

‘Every case of bipolar disorder is different, and it’s more of a spectrum, so I tend to have six-month cycles when I feel pretty depressed, but because I’m medicated, it’s just a really low time.

Then I’ll have six months where I’m full of energy, incredibly industrious, eager to take on challenges and try new things, and quite imaginative.

Once I’m in that frame of mind, I’m concentrated, and if I decide to do something, I carry it out. This is where my bipolar disorder helps me, and my lack of fear of taking risks is what led me to appear on Dragons’ Den – I don’t believe I would have done so otherwise.

After graduating from Manchester University with a degree in German and politics, he attended the university’s business school as a postgraduate.

But as the nation fought to recover from the 2008 financial crisis, employment was scarce.

Mr. Cockton prepared a business plan, obtained financing from a bank, and launched a 13-room EazySleep bed & breakfast on Canal Street. Drew’s hopes were dashed less than a year later when he had to close the business.

He acknowledged that he was “woefully unskilled” and added, “I was doing the work of roughly ten people, and I eventually burned out and had a nervous breakdown.”

I was terribly depressed, lost all my hair, suffered from terrible anxiety, and constantly had trembling hands. My mother recognized that I was gravely ill and brought me to a general practitioner, who then referred me to a psychiatrist, who diagnosed me with bipolar disorder. I was 23.

“At the time, I was a bit of a zombie, so I didn’t really feel much about the diagnosis; I was just existing and it’s all a bit of a haze.”

Mr. Cockton gradually regained his health and reconstructed his life after receiving the correct treatment. Utilizing his proficiency in German, he spent the next seven years managing accounts in Germany, Switzerland, and Austria for numerous Fortune 500 firms.

He stated, “As a job, it was OK, but I despised those situations.” I despised the monotony, the passive-aggressive emails from middle managers, and the entire corporate environment, which neither made me happy nor fulfilled me.

As a creative outlet, I began creating candles as a pastime, but people began knocking on my door and contacting me on social media to purchase them, and it grew from there.

In January of 2017, he decided to take a risk, quit his job, and focus on starting a business.

After a few months, his then-partner Mike Skeggs, 29, quit his job in investments to become his business partner. Together, they launched their first store on a trade estate in Birkenhead, embracing the “industrial chic” aesthetic.

Owen Drew moved into bath oils, perfumes, soaps, and other high-end wellness fragrance-based goods after his stint on Dragon’s Den.

Even the Princess of Wales was rumored to favor the brand. Mr. Cockton asserted that a Buckingham Palace waiter purchased six of his £35 Anglesey candles for Kate as a gift.