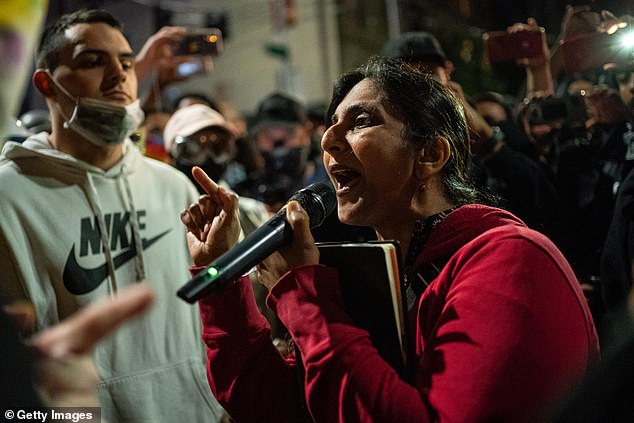 A socialist Seattle City Council member who advocated for police defunding is infuriated that officers are ignoring allegations of feces being thrown on her property.

According to Fox 13 news, Kshama Sawant, 49, wrote a letter to police after they refused to investigate six bags of human feces left in her yard and threatening letters calling her “the queen of s***.”

Sawant spearheaded the Defund the Police protests in 2020 and campaigned for a 50 percent reduction in the Seattle police budget.

The most recent bag of filth was dumped on her property on October 13, the same day police concluded their inquiry. She stated that the actions were “politically motivated.”

The city council member wrote to police, “As a socialist City Councilmember who has participated in Black Lives Matter marches, I am told that my case of six threatening occurrences involving human excrement does not justify even a serious investigation, let alone protection.”

King5 News reports that over 400 cops have left the Seattle Police Department since the COVID-19 pandemic due to woke policies. In 2022, the department reported 954 armed police, the lowest number in thirty years.

On October 13, the Seattle Police Department got photographs of the feces thrower, just after the suspect had thrown their most recent batch and was confronted by Sawant’s buddy.

In the press statement, police did not identify Sawant, but they did mention to her neighborhood and feces complaints.

According to authorities, the friend captured photographs of the culprit and identified him as a 5-foot-4-inch Asian man.

Police noted in a statement, “The department takes occurrences involving public officials seriously, and investigators have gathered evidence, interviewed witnesses, and evaluated everything collected to date.”

“At this time, the department has not discovered any evidence that this case meets city or state standards for hate crime statutes. However, should new material emerge, SPD will follow available leads.”

In her letter to the police, Sawant also criticized “right-wing media” for celebrating the attacks.

‘Needless to say, it is unsettling that the right-wing media, especially the police-run website [Law Officer], depicts these attacks on my home as legitimate against an elected official who has the audacity to criticize or attempt to hold the police accountable.

This is unquestionably a perilous course of action, particularly if accepted by police and supported de facto by SPF leadership and the city’s Democratic Party establishment.

Since the city council of Seattle opted to defund the police in the fall of 2020 and 2021, the force has remained understaffed.

According to an internal investigation, the police department said in April that it would no longer investigate claims of sexual assault.

Two members of the police force presented KUOW with evidence indicating that no sexual assault case involving an adult victim was assigned to a detective last month.

A source within the Seattle Police Department stated that the sexual assault section does not investigate adult sexual assault reports or cases unless an arrest has been made.

The Wall Street Journal estimated that between January 2020 and December 2021, at least 339 Seattle police officers retired or resigned; the city has an authorized force of 1,347 but only about 1,000 deployable officers.

The inability to investigate accusations of sexual assault is a recent phenomenon, but problems within Seattle’s police department have been simmering for years.

In September 2020, Carmen Best, the well admired then-chief of Seattle police, resigned hours after the city council fulfilled its pledge to pass significant plans that would reduce the department’s budget and reduce the number of officers by approximately 100.

A year later, the budget was reduced once more.

The city council voted 8-1 in November 2021 for a city budget for 2022 that reduces police funding by more than $7 million.

Sawant voted against the budget and demanded that instead 50 percent be slashed.