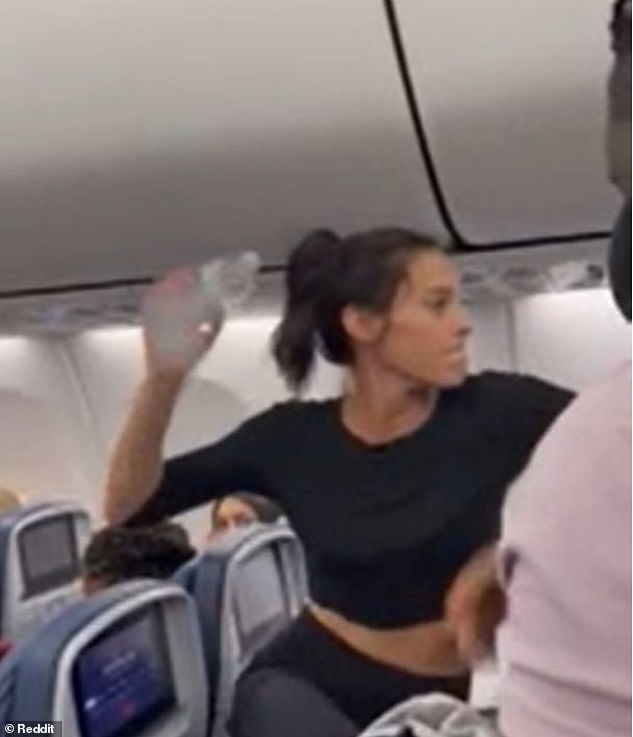 Despite a violent outburst while being pulled from a Delta Airlines aircraft because she refused to remove her dog off her lap before takeoff, a pigtail-wearing Las Vegas waitress is unlikely to be charged.

In a rant that is alleged to have occurred on Wednesday, the lady, 32-year-old Anna Dugan, is seen becoming very upset and hurling a water bottle at another passenger.

After receiving 6,000 comments on Reddit, the footage that was uploaded there is now becoming viral. On the plane in Atlanta, Dugan is seen fighting with a Delta employee over having her dog on her lap.

The aircraft, which had JFK as its destination, departed without incident other than a little delay.

The rules for transporting dogs on flights with Delta are unambiguous. Your pet must stay in its closed/zipped up container for the duration of the journey, the airline’s website states.

In the footage, Dugan can be heard arguing: “My dog was sitting on my lap. I placed him inside the bag. He’s got him.”

She is assured that she would get a reimbursement by a composed male Delta flight attendant. Then he continues, “Grab your belongings and follow me, ma’am; I’m not going to ask you again.”

Before deciding to disembark, the volatile mixologist swears multiple times and makes violent threats towards Delta employees and passengers.

Dugan issued the following statement after the video went viral online: “I am sorry that I got so furious. But I felt like I had to defend myself somehow. My emotions weren’t right, but I know I need to work on them.

Despite the incident’s reporting to the police, no one was taken into custody.

At response to the event, Delta Airlines released a statement that said, “Delta has zero tolerance for this sort of conduct on our flights and in our airports.”

The statement said, “Nothing is more essential than the safety and security of our employees and clients.

Dugan attended both the University of Nevada, Las Vegas and the Del Sol Academy of the Performing Arts in Las Vegas, according to her Facebook profile.

The startling video shows a crew member on a Delta Airlines flight from Atlanta to JFK ordering a passenger to leave the aircraft while she inquires as to why.

Oh no, honey, we’re going to quarrel then, she adds, seeming to lose her fury as the employee insisted she accompany him off the aircraft.

The lady protests about getting off the plane, and the flight attendant informs her that her ticket will be returned.

As she packs her possessions, she finally yells, “F**k you! F**k all of you!” as she grows more enraged by the circumstances.

Then, when a passenger at the rear of the aircraft yells “get off the plane,” the lady yells back, “put your f*****g phone off!” and throws her water bottle at him.

She then responds, “Oh right, f**k you,” when another flight attendant approaches her and says, “You just hit a customer with a bottle.”

When the attendant asks who she hit with the water bottle, she replies that it was the “man who’s filming me with his f*****g iPhone.”

She lashes out at the attendant when he tells her to calm down, saying, “You guys have been nothing but f*****g disrespectful.”

The flight attendant answers, “but look at the way you’re behaving,” after she reiterates that she has obeyed the regulations. Nobody behaving in this manner travels with us on flights.

The flight attendant then points out the passenger as security then arrives to board the plane and inquires about if she hit anybody with the bottle.

The attendant tells her that it’s okay for them to record her when she asks why, adding that she has the right to ask them to stop but not the right to hurl a water bottle at them as she did.

»Woman brawls in airplane over dog in her lap«