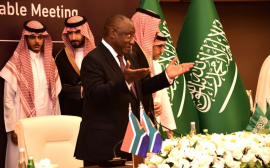 This weekend’s “phenomenally successful” formal State Visit to the Kingdom of Saudi Arabia, according to President Cyril Ramaphosa, has prepared the way for billions of dollars in investments to flood into South Africa.
The purpose of the trip to the Middle Eastern nation was to develop bilateral and commercial connections between the two nations.
Minister of International Relations and Cooperation Naledi Pandor, Minister of Agriculture, Rural Development and Land Reform Thoko Didiza, Minister of Trade, Industry and Competition Ebrahim Patel, Minister of Mineral Resources and Energy Gwede Mantashe, and Minister of Transport Fikile Mbalula accompanied the President on the visit.
At least 17 Memorandums of Understanding (MOUs) were signed in fields such as transportation, defense, energy, and agriculture.
In addition, around $15 billion worth of investment agreements were signed during the South Africa – Saudi Arabia Investment Forum held in the nation on Saturday.
This has been a tremendously fruitful tour for us, and the good news is that this visit has been more focused on developing our economic, diplomatic, and political connections with Saudi Arabia.
However, the economic and business aspects have been the true foundation of this visit. Last night, we held in-depth conversations with His Royal Highness the Crown Prince [Mohammed bin Salman bin Abdulaziz al Saud] and covered a great deal of territory. The fact that we signed 17 MOUs demonstrates the tremendous success we have enjoyed here,” he remarked.
President Ramaphosa remarked that Saudi Arabia’s commitment to spend approximately $10 billion in South Africa during the previous formal State Visit to the country in 2018 had in many respects sown the seeds for the expansion of ties between the two nations.
This seed has been sprouting, and a business called ACWA Power and Renewable Energy has already invested $1 billion in South Africa. More of the billions that the Kingdom of Saudi Arabia is eager to spend in South Africa will soon begin to flow, as evidenced by the 17 MOUs that we have signed and, of course, our 2018 budget.
“COVID-19 intervened and halted and delayed everything,” he stated. “However, everything is now gaining speed and momentum.”
Producing fruit
President Ramaphosa emphasized that despite the fact that numerous agreements have been reached, their fruition depends on their implementation.
Within three months, meetings will be held to “determine the scope of its implementation.”
“Businesses in both the private and public sectors are extremely serious, action-oriented, results-driven, and eager to see implementation. Together, [the] Crown Prince and I have committed to overseeing the implementation of this plan.
“Immediate implementation is required. On our side, we are obviously in a tremendous hurry. The unemployment rate in our country is unpleasant, and we must seize all economic chances with both hands and ensure that all responsible parties are able to implement them,” he said.
Since 1994, formal relations have existed between the two countries, and according to President Ramaphosa, this long-standing cordial relationship offers a solid base upon which to grow.
“The strong friendship that exists between our two countries will serve as a firm foundation for the great achievements that we aspire to accomplish.” Thus, we are ecstatic, and I believe we will not return home empty-handed.” During the business roundtable, businesspeople and Saudi businesspeople were able to negotiate agreements worth approximately $15 billion per side. Consequently, I anticipate quite a few billions of dollars being invested in our economy.
The relationship between the United States and Saudi Arabia is founded on solid economic standards, and this bodes well for a prosperous future for all people, he said.