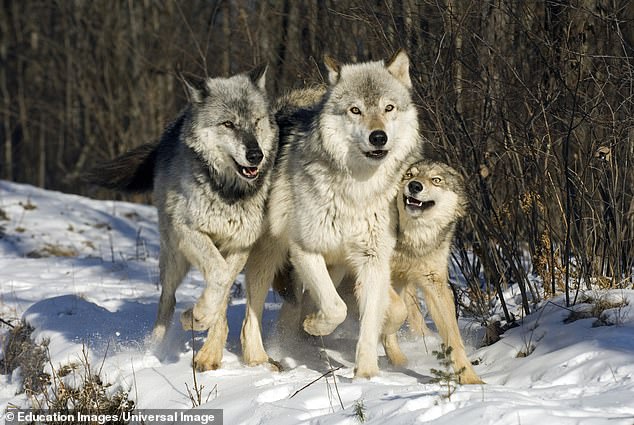 Officials are looking into an incident in which six endangered gray wolves that were killing livestock in Washington were poisoned to death.

Deputies on a snowmobile patrol in Stevens County, which is roughly 65 miles northwest of Spokane, discovered four dead wolves there in late February.

Within a month, investigators from the Washington Department of Fish and Wildlife (WDFW) discovered one additional two.

Following the gruesome findings, a consortium of environmental organizations offered prizes totalling $51,000 for information leading to the capture and conviction of the poachers.

Officials said that all six wolves had perished after consuming poison, however they would not say what it was.

The ‘cowardly conduct’ was described as a ‘tragic, senseless loss to our state’s endangered wolf population’ by Zoe Hanley of the organization Defenders of Wildlife.

Anyone who has the good fortune to see a wolf in the wild is aware of its beauty, intelligence, and strong familial tie.

In the territory of the Wedge pack, the wolves had a history of causing trouble by gorging on cattle and other animals.

The first dead wolf the deputies discovered was first believed to have passed away naturally, but later that day they discovered three more dead wolves, none of which had any visible wounds or gunshot holes.

According to the incident report, the deputies were unable to find any recent snowmobile or human traces despite the fact that the wolves seemed to have been there for weeks based on the state of the remains.

The WDFW informed the police that over the previous seven months, they had been looking into poaching of the endangered gray wolf populations in the region.

According to Becky Elder, a communications consultant for the Washington State Fish and Wildlife Police, “this unfortunate incident involving the death of six wolves is being investigated and is being taken extremely seriously due to the nature of the crime, the extent of the animals that were poached.”

She said that while it was not the first instance of wolf poaching in the state, the size of the killing had shocked authorities.

With six wolves being killed in a very short period of time, “this occurrence is fairly big in scope compared to earlier poaching.”

With more patrols and law enforcement present, Ms. Elder expressed her hope that individuals who carried out the original poaching or any future copycat efforts wouldn’t repeat this kind of unlawful action.

In all of Washington, gray wolves are protected by state law as endangered species. They are also designated as endangered under the federal Endangered Species Act in the western two-thirds of the state.

A wolf or other endangered fish or animal may not be legally killed, and violating this regulation may result in up to a year in prison and a $5,000 fine.

By the end of 2021, there were only 206 wolves in the area, which means that the poisonings killed over three percent of them.

An adult, non-breeding female member of the infamous Wedge pack that had regularly murdered and devoured cattle was killed and relocated by authorities in July 2020.

A month later, four more wolves followed her, demonstrating that authorities would take steps to safeguard animals without needing assistance from ordinary people.

In the neighbouring state of Oregon to the south, eight wolves were discovered poisoned over the course of several months last year.

The public was urged by police to come forward with information when their probe came up empty.

The crime’s perpetrators are still at large.

The 1973 Endangered Species Act marked the beginning of government protection for wolves.

The removal of these safeguards by the Trump administration in 2020 prompted hunters to kill more than 200 animals in less than three days.

But when the protective order was lifted in the last days of the Trump administration, a court reinstated federal safeguards for the animals throughout the majority of the United States.

The removal left the wild dogs vulnerable to hunting, which detractors said would thwart their recovery from widespread eradication at the turn of the century.

Attorneys for the Biden administration had supported the Trump regulation that eliminated protections, claiming that wolves were hardy enough to rebound even if their numbers significantly declined due to aggressive killing.

The fate of a species, whose comeback from the brink of extinction has been hailed as a historic conservation victory, is in jeopardy.

Bitter backlash from hunters and farmers who were enraged by wolf assaults on large game herds and livestock has resulted from that comeback.

They claim that as long as wolf attacks on cattle are still rare, precautions are no longer necessary.

Despite the opposition of hunters to federal protection, Wisconsin’s grey wolf population decreased by 30% in only one year after the Trump Administration delisted it. Around 100 extra wolves perished in various ways, including “cryptic poaching,” in addition to the approximately 220 wolves killed by authorized hunters.

If there was no killing, scientists predicted that the wolf population would rebound in one to two years. However, Wisconsin law mandates wolf hunting between November and February prior to the restoration of federal protection.

There are between 7,000 and 11,000 grey wolves living in Alaska, where there is the largest population, according to records that haven’t been updated since 2017.

As of 2020, there were around 4,500 in the Western Great Lakes area, which includes Michigan, Wisconsin, and Minnesota, and about 3,000 in the northern Rockies, which are still protected by the state.

In the western Great Lakes and Northern Rocky Mountains in 2020, there were roughly 6,000 wolves, with smaller numbers in Oregon, Washington, and California.