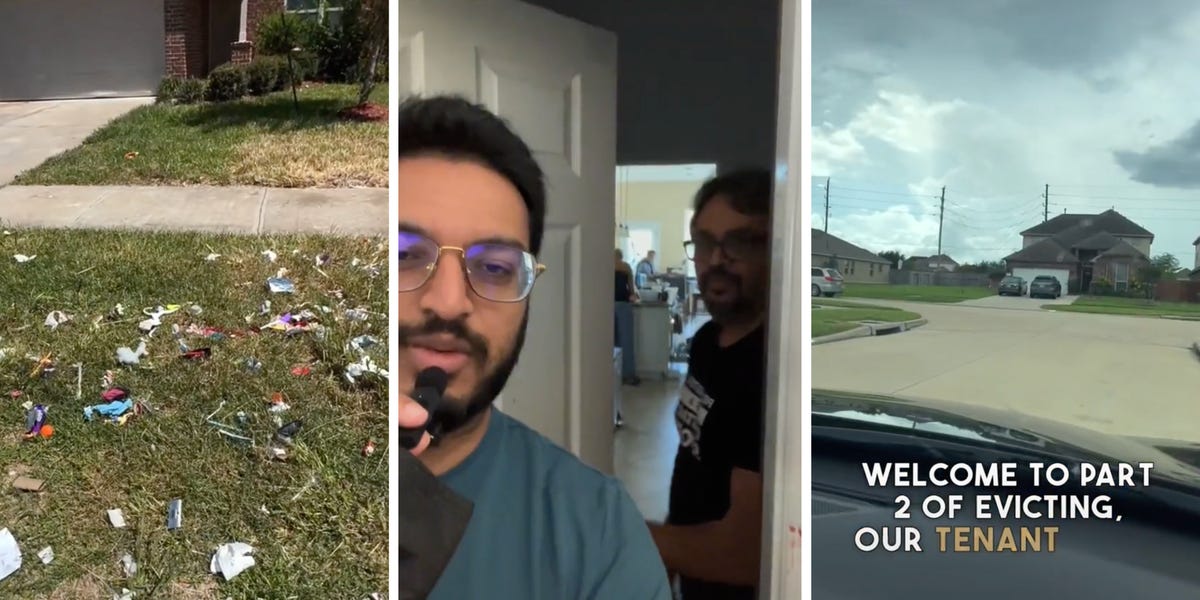 A landlord who posted a number of videos purporting to show his tenant being evicted from the property is receiving harsh criticism on TikTok.

The first video, which Mital Patel released on September 18 and has now received 6.7 million views, captured the property’s uncut grass and abandoned trash. Patel and his father are shown clearing up the abandoned residence in the next five videos, which have received a total of roughly 1.5 million views.

Patel remarked at the start of the series, “Come with us as we evict our Section 8 renter. People from low-income backgrounds may access homes on the private market thanks to government financing provided by the US Section 8 Housing Choice Voucher Program.

Having a Section 8 tenant has numerous benefits and drawbacks, but the outcome in this case was terrible, said Patel.

Patel’s initial video received criticism from viewers for mentioning Section 8; some said he was unfairly targeting the tenant because of their heritage, which he refuted.

A comment with 944 likes wrote, “Section 8 has nothing to do with being a nasty tenant.”

“But for this video. I hope it is evident that most section 8 recipients don’t handle the rental homes in this disrespectful a way “Another commentator said.

When a commenter questioned why Patel brought up Section 8, he said that it was to offer “context” and admitted that not everyone participating in the program “are folks who take advantage.” He stated that he anticipated continuing to rent out houses to participants in the scheme.

Patel stated in a statement that was sent to Insider: “Understanding depends on mentioning that the renter was a section 8 beneficiary. It was never meant to be racist or disparaging.”

Several viewers disagreed with Patel’s video and said that they thought it was improper to record such an incident on social media.

In a video with 67,000 views, one user said, “If you’re a landlord who chooses to generate videos on evicting people, I pray you die.”

“Have some fucking empathy, you guy. Why put someone in the public eye and depict Section 8 residents in such a negative light?” questioned a user.

One user parodied Patel’s video by playing out his introduction, it seems. “Hey there, folks! Hello and welcome to a new video. The user said, “Today we’re making someone homeless!” before telling Patel to “find a real job.”

In a number of later tweets, Patel defended his recordings by claiming that his renter “signed a contract” about property damage, hence he was justified in pointing out that harm in his videos.

Of response to a commenter who accused him of turning “the shittiest day in someone’s life” into “entertainment,” he said that the renter had previously been evicted from homes five times, according to her civil record. In the video, he remarked, “That makes us the sixth time, not having it. The allegation could not be independently verified by Insider.

In response to complaints that his videos were improper, Patel told Insider he disagrees: “I don’t regret posting or saying what I did. I took further steps to guarantee the tenant’s anonymity by blocking all of their personal data, including addresses.”

Added him: “I won’t ever take back whatever I write or say since, as it is, people constantly have hatred to say about landlords in general. That will just make the situation worse.”

Patel urged viewers to continue commenting on and expressing their thoughts on his films on TikTok in a video that was published on September 30—whether they agreed with him or not.

There have been over 500 million views of the #eviction TikTok hashtag. Landlords who post recordings of evictions often use the hashtag in their content. Commenters often criticize them for publishing about evictions on social media, claiming that doing so is disrespectful and helps to humiliate the tenants involved, especially if they can be seen in the video.

On October 5, a landlord who had recorded his vacant house after an eviction came under fire for declaring he was planning to trash away the baby cribs and kids’ toys the renter had left behind. He remarked in the 20,000-view video, “We’ve got another single mother who’s not paying her freaking rent.”

Commenters sided with the renter right away, arguing that the landlord had to give her an opportunity to retrieve her stuff and that because being a mother is “hard,” it was not her fault that she had trouble paying the rent.

When Insider asked the creator for a response, they refused.

Another landlord, who did not immediately reply to Insider’s request for comment, came under scrutiny after posting a video in January with 1.4 million views in which he recorded his renter saying that he was preparing to leave on the day of his eviction. Crazy to even videotape him, a commenter commented. No need for the video, another person said.

After the Supreme Court repealed the CDC’s eviction moratorium, which prohibited evictions during the pandemic because it deemed them a danger to public health, Forbes reported in August that eviction rates in the US had returned to, and in some locations even surpassed, pre-pandemic levels.

The source used a study from Realtor.com that indicated median rents in the US increased by 12.3% in the 12 months leading up to July 2022 to support its claim that rising rents were correlated with growing eviction rates.