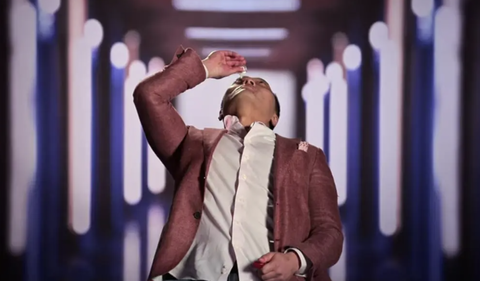 Episode three of the third season of “Love Is Blind” had the most cringe-worthy and strange moment of the season (so far) before the participants had even exited the pods.

After Nancy Rodriguez rejected Andrew Liu’s proposal at the beginning of the show, he sat down for an interview and exhibited a calm, reserved demeanor.

“What are you contemplating?” He was prompted off-screen, possibly by a producer.

Andrew reacted by asking, “Are you rolling?”

They made it apparent that they were not forcing him to fake anything by stating that he could leave if his eyes were hurting.

Andrew on the first episode of “Love Is Blind”

Andrew exclaimed, “This is simply too much,” as he placed eye drops in his eyes.

After using the drops, he returned his gaze to the camera and added, “Just a little bit.”

Throughout the remainder of the interview, he sniffled and blinked his eyes as he expressed how much it hurt that Nancy had rejected him. As tears streamed down his face, he said, “I never imagined I could care for someone who would bring me to tears.”

The footage of Andrew using eyedrops, which most viewers viewed as a ploy to appear more empathetic, might have been omitted by the producers, who edit all television. However, the weird moment was included in the final cut, and viewers had strong reactions to it.

“One of the #LoveIsBlind producers had a grudge towards Andrew and ensured that the clip of him feigning tears was included in the final edit,” tweeted @hollyjgf.

Some social media users who witnessed the incident described it as “manipulative” and voiced concern that people were defending him.

“It is mind-boggling to me that the editors of ‘Love is Blind’ left in Andrew’s manipulative fake tears and drops, and there are STILL men defending him by saying, ‘no, his eyes were just hurting,'” tweeted @JesNx, adding, “Imagine being a man who sees that kind of manipulative behavior and doesn’t fear for the women it’s targeting.”

Others concurred, describing Andrew as “terrifying.”

Meg Zukin, who summarized “Love Is Blind” for Vulture, had a different interpretation of him.

“Andrew on love is blind is a fictional character. He is an Elon Musk follower. He is an artificial intelligence sent by the burning man “Zukin tweeted.

Others were less critical and simply viewed the occasion as entertaining. “Irrelevant of your opinions, he was enthusiastic about this. I live for Andrew, “A user stated in a tweet that included images of the moment.

Andrew told Insider over Instagram Direct Message that viewers might be “outraged” if they so desired.
“Love Is Blind” features Andrew Liu applying eye drops.

Andrew did not remain mute in the midst of the social media uproar, but he never either affirmed or disputed that he had used the drops to simulate tears. He posted a video of the incident to his Instagram account (which was caught by Marie Claire) with the caption, “You guys could have at least cropped off the zit.”

Us Weekly reports that Andrew also posted memes and fan comments to the event on his Instagram story. In one instance, it was intimated that the producers permitted him to utilize the drips without warning him that they would be included in the final cut. He responded: “Due to my contract, I cannot confirm or deny. How unfortunate.”

When Insider asked Andrew through Instagram direct message if he had a comment to the social media backlash he’s been receiving or anything else to say about the situation, he responded: “Simply a few words. Individuals must be free to draw their own opinions. Ultimately, this is part of the pleasure! It is, after all, a television program. As for the scene itself, I am unable to disclose information beyond the official account.”

“If your heart compels you, be offended. Or don’t, “he added.

Several of Andrew’s co-stars from “Love Is Blind” have commented on the viral scene and provided their views to it.

His ex-girlfriend Nancy commented, “It’s one thing to say, “There’s something behind the wall,” I believe. You are dishonest because you are too calm, cool, and collected. As though something is amiss “in accordance with E! News

“Your senses go up. I believe it accurately portrayed what I was experiencing through a wall. This individual is up to no good “She continued.

Another cast member from season three, Zanab Jaffrey, told E! News that the sequence was “garbage” and that it should be discarded.

Alexa Alfia, whose engagement was also featured in the new season, referred to Andrew as a “clout chaser,” according to the site, while season three cast member Raven Ross referred to him as “strange.”

Raven in the second episode of “Love Is Blind”

The “Today” show hosts Vanessa Lachey and Nick Lachey also offered their thoughts on the event.

“It was really dry on set,” remarked Nick. “That was a moment, and he is going to have to live with it for quite some time.”

“There will be folks from all walks of life on these broadcasts. But in the end, the cream always rises to the top. The folks at the end will be there for a reason, namely because they genuinely desired to be there and find love “explained Vanessa.

In the meantime, season two cast member Abhishek “Shake” Chatterjee, who judged women based on their appearance and weight, commented on Andrew’s moment in an Instagram story filmed by E! News. He said in a slide depicting Andrew with his eye drops, “What did I do again that was so terrible?”

The first seven episodes of season three of “Love Is Blind” are currently available on Netflix.