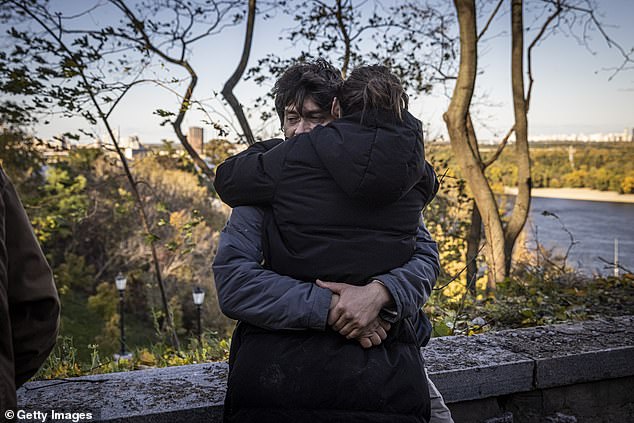 Across the entirety of Ukraine, air raid alerts have been issued in expectation of further Russian missile strikes, just one day after Putin launched the largest assault since the beginning of the war, killing 19 people and wounded 105.

Every Ukrainian province, with the exception of seized Crimea, was urged to be on high alert for additional attacks early on Tuesday, amid reports that incoming rockets were intercepted above the capital city of Kyiv and that suicide drones were patrolling the skies near Odessa.

The city of Zaporizhzhia, which is close to the Russian frontlines in the south, continued to be attacked throughout the night, with officials reporting the destruction of schools, hospitals, and residences.

It occurred barely hours after Putin’s bloodthirsty war hawks praised his new no-holds-barred attitude to the war and urged him to bomb Ukraine ‘into a 19th century country’ on state television.

Yuri Podolyak, a military analyst appearing on Channel 1, stated that Russia is ‘easily’ capable of maintaining the intensity of Monday’s attacks throughout the winter, anticipating ‘catastrophic’ repercussions for Ukraine.

He stated, “A red line has been crossed, and I believe this is now evident to everyone.”

“All European governments have swiftly requested the evacuation of their embassies from Kiev.

They recognize that this is not a one-time occurrence and that the winter in Ukraine will be terrible.

Former Russian commissioner for human rights Konstantin Dolgov also urged Putin to continue the bombardment, telling TV viewers, ‘Are they whining yet?’ Are they already howling?’

Alexander Artamonov, a defense specialist, stated that Western hopes that Russia would run out of missiles would never materialize. They will last forever.

The pro-war extremist emphasized, “Since Ukrainian society is currently psychiatrically ill, it is of course essential that systematic strikes continue.” In psychiatry, patients are not provided with firearms.

Naturally, they are treated, and naturally, they should receive needed benefits, but everything that may be converted into a weapon, whether it be a car, a knife, a gun, or something else, must be confiscated.

Therefore, if bridges and railroads are destroyed, it will be impossible to transport troops to the battlefield.

Moscow’s volley of missile strikes on Ukrainian cities was met with jubilation by Russian authorities and pro-Kremlin journalists, who in recent weeks have condemned the Russian military for a series of humiliating battlefield failures.

Commentators and war correspondents hailed Monday’s raid as an acceptable and long-awaited response to Ukraine’s successful counteroffensive in the northeast and the south and a weekend assault on a major bridge between Russia and Crimea.

However, many suggested that Moscow should maintain the intensity of Monday’s missile attacks in order to win the conflict immediately.

Putin’s initiative is waning, and he is becoming more reliant on circumstances and those who are crafting the ‘win’ (in Ukraine) for him,’ stated Tatyana Stanovaya, founder of the independent think tank R.Politik, in an online post published on Monday.

Putin’s fans have demanded harsh action on the battlefield in Ukraine for weeks. These cries escalated over the weekend, immediately after an explosion on the Crimea-Russia Kerch Bridge sent shock waves throughout the world.

The longest bridge in Europe is a prominent emblem of Russian military might, and Putin himself inaugurated it in 2018.

‘And?’ Margarita Simonyan, the head of state-funded RT television, questioned Moscow’s response to the bridge attack on social media.

Alexander Kots, a war journalist for Russia’s popular pro-Kremlin newspaper Komsomolskaya Pravda, opined: ‘This is one of those times when the country needs to demonstrate that it can strike back.’

It is time for battle! viciously, even cruelly Without regard for Western censures,’ Sergei Mironov, a senior Russian politician and leader of the state-backed party A Just Russia, tweeted on Saturday.

There will not be more severe sanctions. They will not say anything worse. We must carry out our duties. We began it, so we should see it through to the end. There is no way to return. Time to answer!’

The strikes, which affected 15 Ukrainian cities, the majority of which were regional capitals, destroyed electricity lines, damaged railway stations and highways, and deprived cities of water.

For the first time in months, Russian rockets burst dangerously close to government buildings in the center of Kiev.

Putin stated on Monday that the strikes were revenge for what he termed Kyiv’s ‘terrorist’ acts against the Kerch Bridge, and he warned a ‘strong’ and ‘proportional’ response should Ukraine conduct any attacks that threaten Russia’s national security.

He stated, “No one should have any reservations about it.”

After the attacks on Monday, RT’s Simonyan wrote, “Here comes the counterattack.” The Crimean bridge was an absolute red line from the start.

Ramzan Kadyrov, the strongman leader of Chechnya, a Russian territory in the North Caucasus, stated that he is now “100% satisfied” with the progress of the Kremlin’s “special military operation.”

He was one of the most enthusiastic proponents of “more extreme measures” in Ukraine, even advocating the use of nuclear bombs with a low yield.

Sergei Aksyonov, the administrator of Crimea appointed by Moscow, welcomed the strikes as “excellent news.”

Supporters of the Kremlin, meanwhile, demanded that Putin and the Russian military maintain the rate and intensity of the attacks and damage to Ukraine’s infrastructure.

In his remarks, Aksyonov emphasized that if daily actions to demolish the enemy’s infrastructure had been done, all would have been completed in May and the Kyiv government would have been overthrown.

Aksyonov wrote, “I hope that the pace of the operation will not now slow down.”

After releasing a video of himself dancing on a balcony while wearing a cap with a Z on it, RT’s top host Anton Krasovsky stated in another Telegram post that the damage to Ukraine’s power lines was “not enough!” Not adequate!’

The military situation necessitated a different approach to the conflicts, according to Andrei Medvedev, a state television correspondent.

Thus it transpired. But does it change much?’ Medvedev, who works for the Russian state television network VGTRK and is a member of the Moscow City Council, sent a message on Telegram.

‘It does alter if attacks on essential infrastructure become routine, if attacks on railways, bridges, and power plants become part of our strategy (the situation).

According to (official) pronouncements, however, the decision to send Ukraine into the Middle Ages has not yet been made,’ wrote Medvedev.

As of today, it may be said that Putin was convinced to adopt a more confrontational stance. And this matches his perception of the issue. However, this is a precipitous slope from which there is no return,’ Stanovaya added.