Skip to content
Go Home «» News «» World News «» The Australian senator Matt Canavan asserts that “there are only two genders.” 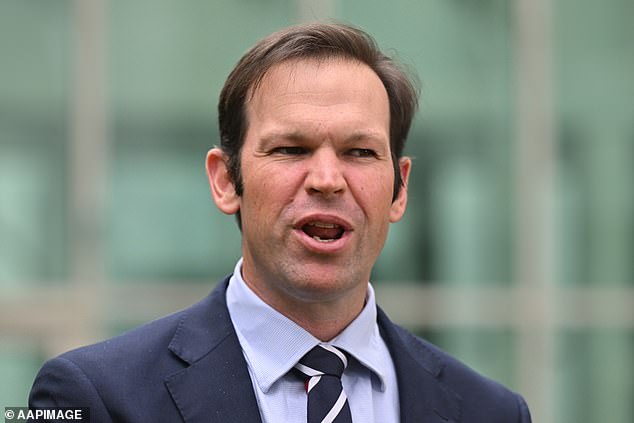 At a gathering this past weekend in Sydney, right-wingers were instructed to declare that there are only two genders and that married parents are better for children.

The conservative political action conference (CPAC) event was held on Saturday in Sydney’s Darling Harbour, and those in attendance were told they needed to stand up for beliefs that were previously “self-evident.”

After identifying and describing the “truth-tellers” to the CPAC crowd, Senator Matt Canavan of the North Queensland Liberal National Party was greeted with thunderous applause.

According to Senator Matt Canavan, conservatives must be truth-tellers, including arguing that there are “only two genders,” at the right-wing CPAC conference on Saturday in Sydney.

Senator Canavan remarked that it was simple to identify those who were telling the truth.

‘They now have an adjective, they are dubbed “cancelled.”

‘Anyone who says they’ve been “cancelled” is probably telling the truth.’

Senator Canavan outlined a series of truths that he considered required “courage” to declare.

‘The truth is that you cannot run an industrial economy on a weather-dependent electricity system,’ he said.

‘The truth is that if we abandon fossil fuels, billions of people would starve!’

In households where the mother and father are married, Senator Canavan asserts, the kids thrive.

The truth is that efforts to combat climate change are a hoax that is being supported by communist and ex-communist officials and spread by Western corporations.

The Chinese Communist Party has stolen thousands of our manufacturing jobs because they know they can get away with it, despite the fact that they have never adhered with any international regulations, including those governing commerce and the environment.

The truth is that raising children by a mother and a father who remain married is the most important task in our culture. Children also fare better when their parents are married.

‘Finally, there are only two genders.’

Senator Canavan stated that these are things that should be taught to kids.

Former Prime Minister Tony Abbott, who also spoke at the conference, picked up on this issue.

The statement made by Mr. Abbott was, “I am obviously wholly out of touch with the current world.”

On Saturday, protesters gathered outside the CPAC event, accusing those inside of being “fascists,” “transphobes,” and “anti-queer.”

‘I dislike the climate cult and the virus panic.’ I don’t comprehend the urge for gender fluidity.’

He recounted door-knocking in his former constituency of Warringah, on Sydney’s northern beaches, and being informed by a mother that she couldn’t vote for him because her children disagreed with his attitude on climate change.

Mr. Abbott claimed he questioned the woman, “Who is the adult?”

‘I believe we’ve been rather shy of acting like grownups,’ Mr. Abbott said.

According to Mr. Abbott, the task for conservatives was to limit government intrusion into people’s lives.

Nigel Farage, the former leader of the Brexit party, claimed regular Australians were approaching him and saying they ‘wanted their country back.’

‘That includes putting restrictions in place so that good people can live their lives without having to answer to the government about everything from the color of their heat reflecting phones to the pronouns they use,’ he said.

A tiny handful of protesters assembled outside CPAC accused those in attendance of being “fascists,” “anti-queer,” and “transphobes.”

At one point, police had to separate the demonstrators from a CPAC member who had entered the crowd with a TV crew.

Police also prevented protesters from storming the Darling Harbour International Convention Centre, where CPAC was hosted, through a back entry.

Inside the arena, international speakers argued that conservatives lacked the fortitude to defend their convictions.

Before their AFL match in 2020, these Collingwood and Richmond players are recognizing the Black Lives Matter movement, and Mr. Farage declared he would not “bend down” to it.

Nigel Farage, a British political analyst and former head of a pro-Brexit party, claimed that during his week in Australia, he had been approached by several Australians who were upset about the lack of morally upright politicians.

Mr. Farage reminded the CPAC members that he encounters regular, decent Australians everywhere who express concern for the future of their nation.

They are concerned about what Australia is turning into and find it incomprehensible that the conservative party lacks both bravery and leadership.

“We want Australia back,” they say.

Tony Abbott, the former Liberal Prime Minister, told CPAC attendees that he did not comprehend the “gender fluidity agenda.”

Mr. Farage claimed that the political left had taken over schools and the media.

The entire foundation of Western civilization, according to Mr. Farage, is being challenged.

“We are educating eight-year-old children that if you are white, you are guilty, you are an oppressor, and you should be ashamed of your ancestry, history, country, and culture.”

People were instructed to ‘take the knee’ and ‘bow down’ in support of causes such as Black Lives Matter, but Mr Farage refused.

Even more outrageously, he referred to former Liberal prime minister Scott Morrison as “a gutless wimp” for caving in to pressure to accept UN climate targets at the Glasgow summit in late 2021.

Boris Johnson, who recently lost his position as UK prime minister, was also unmercifully criticized by the former head of the UK Independence Party. Johnson and Johnson were each other’s successful partners in the Brexit campaign.

‘Boris has hurt the Conservative brand enormously and let everyone down,’ Mr. Farage declared on the CPAC platform.

‘It’s a pity. He had the world at his feet, but he couldn’t exactly speak the truth. He was never an authentic conservative.’

The happiest moment of Mr. Farage’s life was “bringing down” former British Prime Minister Theresa May (seen left), who is shown here with former US President Donald Trump.

Marie Antoinette is most remembered for the anecdote, which may or may not be genuine, in which she sarcastically quipped to starving peasants requesting food, “Let them eat cake.”

Even Mr. Johnson’s conservatism couldn’t be confirmed, according to Mr. Farage.

‘There are many things we don’t know about Boris, like the number of children he has,’ he remarked.

This was a reference to Mr Johnson’s tumultuous love life, which includes numerous admitted indiscretions.

‘Removing Theresa May as Prime Minister is one of my proudest achievements,’ he said.

According to Matthew Whitaker, an acting Attorney General in the Trump administration, conservatives in the United States and Australia have similar chances and confront similar difficulties.

Visitor and former acting attorney general for the Trump Administration Matthew Whitaker, a US speaker, echoed the call for conservatives to defend their principles.

As the “left” tries to undermine traditional values, Mr. Whitaker claimed he has been struck by the similarities between chances and problems in the US and Australia.

‘It is truly a comparable war, one that we must all join,’ he said.

The government wants to grow, and the only people left to stand up and defend that freedom are liberty-loving people like you, me, and our countrymen.

»The Australian senator Matt Canavan asserts that “there are only two genders.”«