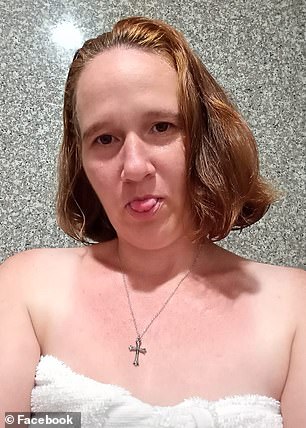 It has been documented that a five-year-old Texas child wailed “but I’ve been nice” as her mother strangled her to death.

In devastating pictures from before she was savagely murdered by her 37-year-old mother Melissa Towne, Nichole can be seen grinning.

In other shots, the mother and daughter can be seen laughing and having fun while posing for pictures before the tragic demise.

It follows Melissa’s Sunday appearance with Nichole in the car’s passenger seat at a hospital in Tomball.

The youngster had injuries on her face and neck and was wrapped in a laundry mesh bag.

A knife identical to the one her mother had in her pocket had been used to sever her neck. Nichole was a “evil” person, according to Melissa, who acknowledged murdering her.

She claimed to have killed her in the woods because she “didn’t want to deal with her anymore.”

She claimed to have strangled the child as she cried out, “But I’ve been nice,” to the cops. Melissa instructed her daughter not to “fight her,” disregarding her kid’s cries.

The youngster was driven to a forested area where she hacked her neck, according to the charging paperwork.

She strangled her as well as placed a plastic bag over her head to suffocate her when she didn’t pass away.

Melissa put her daughter’s corpse in a car and went to a hospital.

She entered and yelled for assistance, telling the nurses that her body was “hurting” and that her kid was in the vehicle.

The youngster was later discovered inside the woman’s Jeep Cherokee when a nurse awoke outside. Her neck had been cut, and her head was covered in plastic.

On Monday, a court imposed a $15 million bail amount for Melissa. It’s still unknown why she was watching the child on Sunday.

Melissa did not have legal custody of daughter, according to the neighborhood news source KHOU.

The father of the kid is unidentified.

She also has three more kids, who are all “safe and accounted for” and range in age from two to 18. Towne has previously been detained for assault, trespassing, and vandalism.