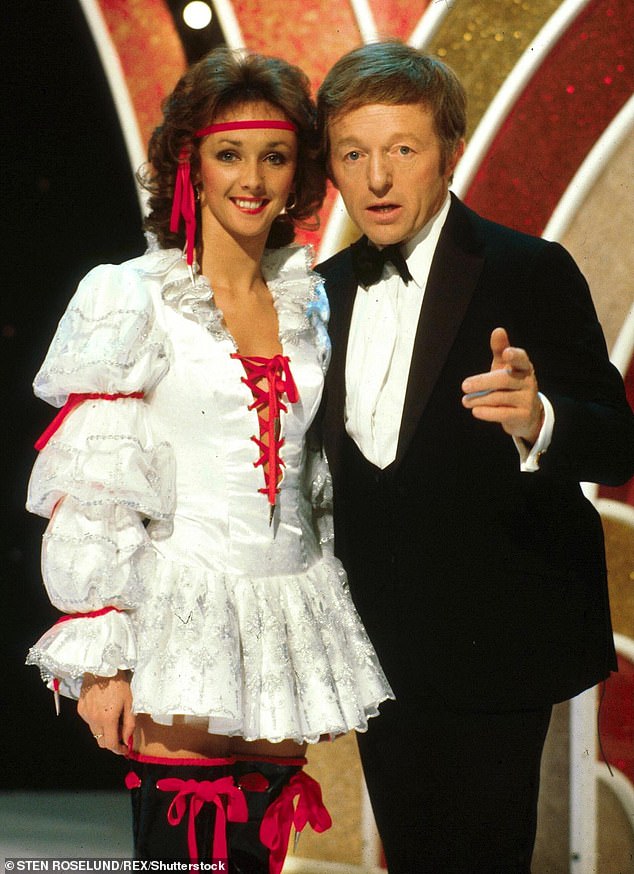 Paul Daniels’ widow, Debbie McGee, is asking £200,000 for his famous collection of illusions, costumes, and props.

The 63-year-old ex-assistant of Mr. Daniels has decided it is time to pass on her late husband’s unique collection to the next generation of magicians.

It consists of playing cards, wands, his magic top hat, the largest collection of magic posters ever sold in the UK, as well as well-known feats he demonstrated on his popular BBC One program.

Daniels also drew inspiration for his performance from books authored by other artists.

Daniels’ well-known Geometrix illusion box, which is also his wife’s favorite, is predicted to bring about £12,000 by alone.

Her husband used swords and other geometric shapes to skewer the 6-foot-tall box while she was imprisoned within it for the mind-blowing stunt.

It was presented twice on The Paul Daniels Magic Show: first in 1985 and once in 2005, after the duo had improved their show while on tour.

The auction also includes Daniels’ favorite illusion, Phantom, which is based on Phantom of the Opera.

The levitating lady trick is projected to bring in £30,000 and comprises a bed, four costumes—the Phantom, the woman, and two assistance outfits.

Daniels used a number of sleight-of-hand techniques, such as the use of playing cards, fake flower arrangements, a string of silk hankies, and a prediction trick.

During his extensive travels across the world, Daniels accumulated around 500 old posters about other magicians. These date from the late 1800s to the present and are valued at £60,000.

A Chung Ling Soo poster, who is regarded as one of the greatest magicians of all time, is estimated to be worth £2,000. When his “bullet catch” technique failed in 1918, Soo was fatally injured on a stage in London.

The value of a letter sent by Harry Houdini to writer and magician Will Goldston from Liverpool is estimated at £1,200.

There are also two very rare mystery clocks, each worth tens of thousands of pounds, made by French watchmaker and magician Jean-Eugene Robert-Houdin. They are so called because they first seem to have no workings.

It comes after a very public argument over the estate of the magician between her and the son of her late husband, Paul Daniels.

Paul Junior, now 61, referred to the dancer as a “fake witch” and said that she was “only good” for a job at McDonald’s in the months after his father’s death in 2016.

However, Debbie said that she is on speaking terms with her stepson and isn’t “carrying grudges” over the past, five years after the star passed away from a brain tumor.

Debbie and her husband first came into contact in 1979 when she was hired to participate in his Great Yarmouth summer production. She thereafter became his regular assistant and co-starred with him on his TV program from 1979 until 1994.

In the UK, the popular program frequently drew 15 million viewers and was distributed to 43 nations.

Despite having a 20-year age difference, the pair started dating and was married in 1988.

Daniels, who was diagnosed with an uncurable brain tumor, passed away in 2016 at the age of 77.

Since then, his magic collection has been kept in storage at the couple’s Henley-on-Thames, Berkshire, residence.

Debbie said that she believes now is the ideal moment to let everything go.

The “Godfather of Magic’s” possessions will go up for auction at Special Auction Services in Newbury, Berkshire, drawing the greatest magicians in the world.

I won’t ever use the techniques again, and I don’t even think about these things, Debbie said.

‘Up until this point, the only things I could fully let go of were a few things to his boys, but it seems unjust of me to keep these things to myself without sharing them.

There are many magicians in the world that collect magic items, and Paul always had the mindset that you only have something for so long until it’s time for someone else to possess it.

Initially, it was such a psychological strain, but now I’m enjoying going through everything. It has been therapeutic.

The illusions are all one-time events that I personally experienced and remember doing. My favorite illusion was The Geometrix. It’s difficult to let go of something, but where would I put it?

The Phantom trick, which was inspired by the Phantom of the Opera, included levitating the female, who was myself. With that, the whole scene—a bed, my costume, the Phantom outfit, and two helpers—is up for sale.

It was a huge show, I thought. We did it for the TV program, the Grand Order of Water Rats ball, and we even had Paul’s magician son do it for Penn and Teller.

“There were things I found that I didn’t even know he still possessed, like a tactic he used for master seminars in America,” the author said.

“I didn’t know Houdini had a letter; I discovered it inside a book.”

He also had an incredible book collection, and as I browsed through them, I remarked that it was not surprising that he knew what he did.

“It’s very intriguing and I think it’s excellent for newer magicians to be able to gain hold of this information,” said one magician. “Lots of them have had book stamps so you can see they have been passed on to other magicians.”

I believe that some of the artifacts will be utilized by magicians and others will simply be purchased by collectors. They won’t be utilized, but many people will get to view them since David Copperfield is interested in purchasing them for his museum in America.

Paul was well-known around the globe; he wasn’t only a legend in England. Nobody else produced the number of TV series that we did. Apart from his personality, Paul excelled in picking up tricks fast and making them appear nice.

‘Most magicians train their tricks for up to two years before performing them in front of an audience. If we were fortunate, we may have had four days to prepare before the performance.

Paul would have cherished the idea that others would own a piece of him.

Director of SAS Thomas Forrester stated: “We are honored to be selling Paul’s collection. He really was the 20th century’s most influential magician, and for many people, like me, who grew up watching him on TV, he brings back many fond memories.

Paul was a fantastic performer who popularized magic, and his collection is evidence of his long and prosperous career.

“This auction is really once in a lifetime.” You may witness the whole trick being done by searching for Geometrix.

Some of these illusions and feats are masterpieces. We have one of Paul’s last prototypes, an unfinished magic table. I’m not a magician, therefore I’m not permitted to know how it works.

It’s intriguing all around and quite unusual for anything like this to be put up for sale,

On November 23 and 24, the Paul Daniels collection will go up for auction.