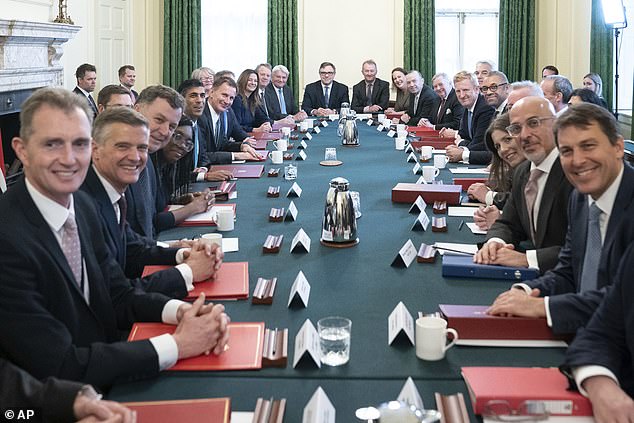 Analysis reveals that the bulk of Rishi Sunak’s Cabinet attended fee-charging schools, and nearly half attended the top Oxbridge universities.

Mr. Sunak himself attended Winchester College in close proximity to his hometown of Southampton, where annual tuition for day students is approximately £34,000.

19 of Mr. Sunak’s 31 cabinet positions (61%) are held by individuals who attended an independent school, according to a research by the social mobility charity Sutton Trust.

The percentage of people who attend fee-charging schools is marginally lower than in Liz Truss’s Cabinet (68%) and in Boris Johnson’s first Cabinet (68%). (64 per cent). But it is far greater than Theresa May’s Cabinet in 2016 (30 per cent).

In contrast, the present Labour shadow cabinet is filled with graduates of public schools.

In fact, 84% of Sir Keir Starmer’s most senior colleagues attended a comprehensive school, while only 10% attended a grammar school.

This compares to fewer than one-third (32%) of the Labour Shadow Cabinet at now.

While his Cabinet is somewhat more diverse than Truss’s, Tuesday’s choices demonstrate how possibilities to attain the most coveted jobs remain unequally distributed.

Priority must be given to maximizing Britain’s talent, regardless of origins.

Geoff Barton, general secretary of the Association of School and College Leaders, stated: ‘We have nothing against private education — we represent independent school leaders — but it is essential that our political leaders come from diverse social backgrounds and understand the public’s needs and life experiences.

However, we are glad that the new Education Secretary, Gillian Keegan, not only attended a public school but also completed an apprenticeship, which gives her a clear grasp of the importance of a skills agenda that will help many young people and the future of the nation.

»Sunak’s team’s privileged education is revealed, as the majority went to fee-paying schools«