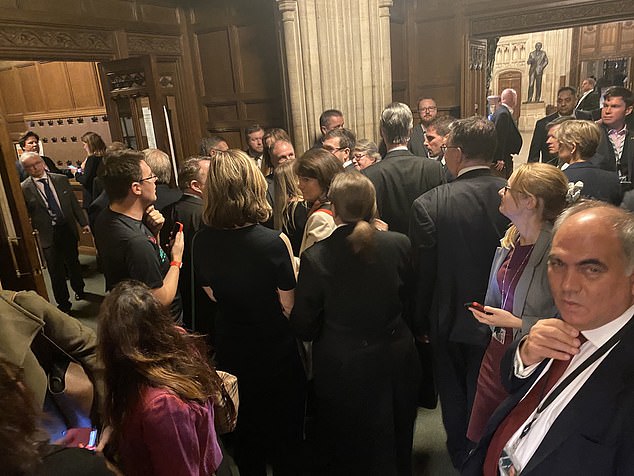 After a 90-minute “shouting battle,” she fired Suella Braverman in a matter of astonishingly few hours. She then saw her Chief Whip “resign.”

The former home secretary publicly attacked the prime minister, charging that she had broken important promises and wavered on issues like lower immigration that were included in the manifesto.

Following Miss Truss’s decision to abandon her proposal to eject Conservative MPs who voted against the government on fracking, Chief Whip Wendy Morton and her assistant Craig Whittaker seemed to resign.

Last night, No. 10 was unable to confirm if it still had a chief whip.

Therese Coffey, the deputy prime minister, and Jacob Rees-Mogg, the business secretary, were accused of “manhandling” MPs through the voting lobbies during the tumultuous scenes in the Commons. Both ministers refuted the accusation.

Mr. Whittaker was heard saying to his colleagues, “I am f***ing enraged and I don’t give a f*** any longer,” as government discipline broke down.

It’s a catastrophe, Tory MPs were heard yelling at Miss Truss, who had a pale face.

One of the PM’s cabinet allies said that it seemed hard for her to regain her power and remarked, “It seems like it’s finished.”

Senior Tory MPs were frantically debating Miss Truss’s removal plans, although the exact time and method are still unknown, as is the possibility of a successor.

Some MPs think she may have to quit by the weekend, perhaps even tonight, since her power is eroding so swiftly.

According to Downing Street, Mrs. Braverman, the Home Secretary with the shortest tenure in recent times, resigned after breaking the ministerial code by emailing a classified document to a Tory MP.

However, a number of sources claim that she left after a “fiery” 90-minute discussion with Miss Truss the night before at No. 10, during which the Home Secretary told the PM it would be “crazy” to alter immigration laws in order to spur economic development.

Last night, Mrs. Braverman sent an extraordinary resignation letter in which she attacked the Prime Minister’s record and proposed that she resign.

Everyone can see that we are living in a turbulent moment, she wrote. “I’m worried about the way this government is going.” Not only have we breached important promises made to our supporters, but I have grave doubts about this government’s dedication to keeping promises made in the manifesto, including lowering overall migration rates.

– The PM said that the pensioners’ “triple lock” will be safeguarded, making yet another U-turn;

– She vowed not to step down, telling lawmakers: “I’m a fighter, not a quitter”;

– The Prime Minister also delivered another groveling apology, admitting she had “made errors” and expressed her regret;

– Labour demanded an investigation into claims that Tory MPs were “bullied” during the vote;

– The head of the party, Sir Keir Starmer, made fun of the prime minister by posing the question, “What’s the purpose of a Prime Minister whose pledges don’t even survive a week?”

– One of the PM’s closest advisers was demoted during a No. 10 briefing in which Sajid Javid, the former chancellor, was called a “s***” minister;

– Right-leaning Tory MPs expressed concern about a Remainer takeover since James Cleverly, the Foreign Secretary, is the lone Brexit supporter in a key Cabinet position;

Following the market instability brought on by last month’s emergency Budget, Mr. Kwarteng was fired only five days before to Mrs. Braverman’s resignation.

The email she sent regarding immigration policy from her phone, according to a source, was a “clear infringement” of the ministerial code’s need to maintain secrecy.

Mrs. Braverman admitted the error yesterday night, but she insisted that the policy will soon be released and that MPs had already had a briefing on the majority of it.

A Whitehall insider said that the “trivial” incident looked to be used as a cover to get rid of a senior minister who had made no secret of her desire to continue in the leadership position.

According to the insider, “She’s certainly left because of a bust-up.” Like Penny Mordaunt, she was always a flight risk, but now she’s getting ready for what’s to come. According to two sources, the Home Secretary’s departure happened after a meeting between the two the night before to discuss immigration policies.

One person said that loud voices could be heard outside and characterized the 90-minute exchange as a “shouting battle.”

According to one source, Mrs. Braverman was incensed when she was told to loosen immigration restrictions in order to spur economic expansion and prove to the Office for Budget Responsibility that the Government’s economic plans made sense.

‘Are we simply going to rubbish every manifesto promise going,’ she allegedly replied to Miss Truss, calling the concept ‘crazy.’

As part of a significant economic agreement with India, Mrs. Braverman also disagreed with the PM over her proposal to loosen visa requirements. The potential of Mrs. Braverman making a speech of resignation in the Commons later today has Downing Street preparing for it.

According to reports, Miss Truss had originally intended to choose Mr. Javid as Home Secretary, a position he had held previously.

But due to the briefing dispute over which the aide was suspended, the two were forced into a standoff.