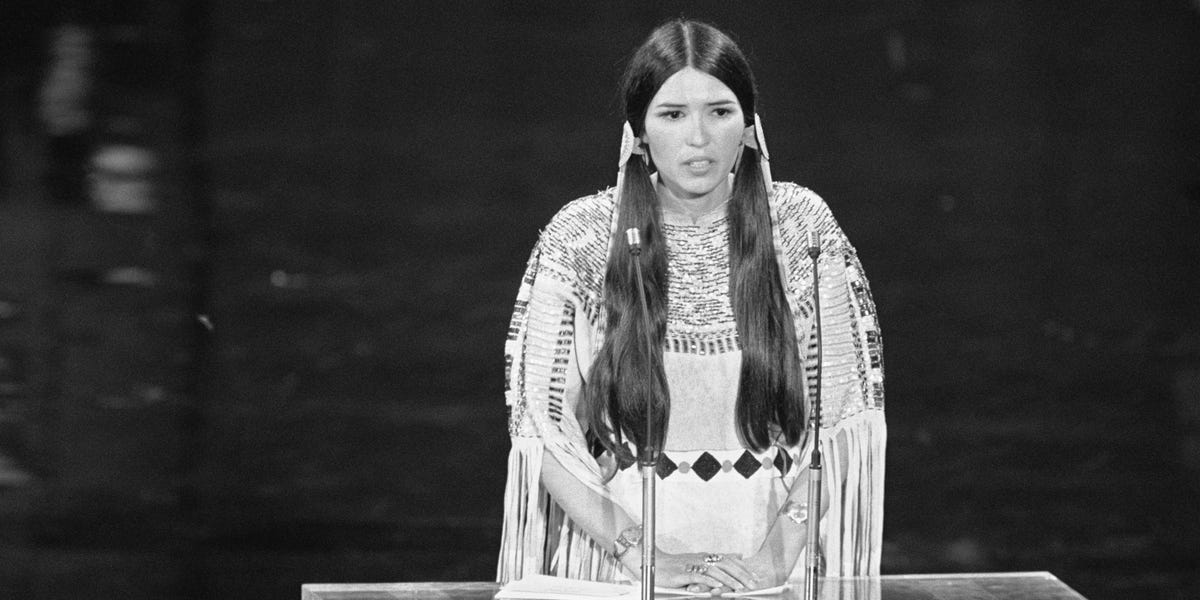 The sisters of Sacheen Littlefeather, an actor and activist who declined an Academy Award on Marlon Brando’s behalf in 1973, claimed that she was not genuinely Native American.

Trudy Orlandi, her younger sister, told the San Francisco Chronicle, “The best word I could think of to describe my sister is that she constructed a fantasy.”

She both lived and died in a fantasy world.

In an opinion column published by the San Francisco Chronicle on Saturday, Jacqueline Keeler interviewed Rosalind Cruz and Trudy Orlandi, Littlefeather’s sisters, who stated that Littlefeather is not genuinely Native American.

Orlandi informed The Chronicle that it is a fabrication. “My father was his own person. His family originated in Mexico. My father was also born in Oxnard.”

Cruz reportedly stated, “It is a hoax,” according to The Chronicle. “It is offensive to the culture of the indigenous people. Furthermore, it is demeaning to my parents.”

Littlefeather, who passed away on October 2 at the age of 75, donned a buckskin dress when she famously declined Brando’s Best Actor Oscar for his starring performance in “The Godfather”

Littlefeather, whose actual name is Marie Louise Cruz, delivered a 60-second statement refusing the prize on Brando’s behalf and condemning the abuse of Native Americans in Hollywood, to a mixture of shouts and cheers from the audience.

“[Brando] deeply regrets that he is unable to accept this incredibly wonderful prize,” Littlefeather stated in his address. The grounds for this are the contemporary treatment of American Indians in the film industry and on television, as well as the recent events at Wounded Knee.

According to The Hollywood Reporter, Littlefeather later stated that John Wayne had to be prevented from storming onto the platform to attack her during her speech.

The Academy of Motion Picture Arts and Sciences issued an apology to Littlefeather in August, stating that “the hatred you faced as a result of this speech was inappropriate and wrong.”

It continued, “The emotional toll you have borne and the damage to your career in our industry are irreparable. Your bravery has remained unrecognized for far too long.”

According to The Chronicle, both Orlandi and Cruz stated that their father’s side of the family has no recognized Native American lineage and identifies as “Spanish.”

On Saturday, a White Mountain Apache spokesperson did not immediately respond to Insider’s request for comment.

Littlefeather’s sisters also informed The Chronicle that her claims of a violent and impoverished upbringing were false. Both sisters stated that their primary motivation for coming out was to rectify Littlefeather’s portrayal of their father as a violent alcoholic.

Cruz told The Chronicle that his father was deaf, having lost his hearing at age 9 due to meningitis. “He was born into a poor family. His father, George Cruz, was a violent alcoholic who frequently assaulted him. And he was placed in foster homes and with relatives. However, my sister Sacheen accepted his fate.”

Cruz and Orlando told The Chronicle that they learned of Littlefeather’s death via the internet, and neither was invited to the funeral.