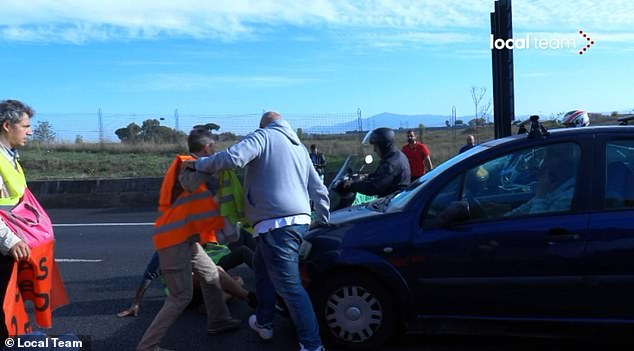 Drivers incensed by a group of environmental protestors who blocked traffic on a key road near Rome have resorted to hauling them away.

The Grande Raccordo ringroad outside the Italian capital was blocked during rush hour by Last Generation protestors who had erected sizable posters against fossil fuels.

Drivers were irate as a result of the obstruction and stepped out of their cars to argue with the eco-fanatics and beg them to move aside.

Some others intervened directly by yanking demonstrators out of the road.

One guy on a motorcycle said angrily, “I have to leave, I’m a doctor,” pleading for passage.

However, a female activist requested that he give over his medical identity after refusing to let him through without viewing it.

When he ultimately waved his ID card in front of the protester, they parted ways.

One irate motorist yelled at a demonstrator in another heated interaction, “You have to move, get out of the f***ing road!”

A lady stepped in and said, “Stop!” as he began to physically remove the activist off the road. You’ll do him harm.

Another guy intervened and yelled at the protesters, “This is not the way to protest.” Plan a legitimate protest; don’t block the highway with one. We must leave for work.

If not, this will turn into a poor vs poor situation. People will get upset and physically assault you, which is unfair. You’re upsetting folks.

We’ve been outside Parliament countless times, but we haven’t received anything, the protester said.

Do you believe that protesting is simple? You have no idea how miserable I feel. It’s challenging.

When police finally got involved and dispersed the demonstration, they tore the blockage apart and opened the way for automobiles to pass.

The demonstrators are demanding more aggressive government action on the climate crisis, and their banners proclaim “no gas” and “no coal.”

They are calling for an increase in solar and wind power production as well as a stop to the restarting of idle coal facilities.

Stopping traffic on congested highways has evolved into a technique employed by climate demonstrators all around the globe.

Drivers argue in the background as a teenage protester spreads herself out over the busy road and does the splits.

Activists in the UK have pledged to keep the Dartford Bridge closed for “at least 24 hours” after forcing police to shutter it today.

After Just Stop Oil protestors climbed the Queen Elizabeth II Bridge girders just before rush hour this morning, traffic on the M25 was spotted backing up for seven miles.

One of the protestors said in a video released today from the top of the bridge that he was “not willing to sit back and watch everything I love burn for the rest of my life.”

A visibly upset Morgan Trowland, a 39-year-old civil engineer, raged in the video against “the present fraudulent, charlatan excuse for a Government” and said it was “accelerating that process” by issuing more oil and gas licenses.

The act of selling ourselves and our children into an inhospitable world is an outright act of treason, he said, and I feel it is my obligation to do all in my power to stop it.