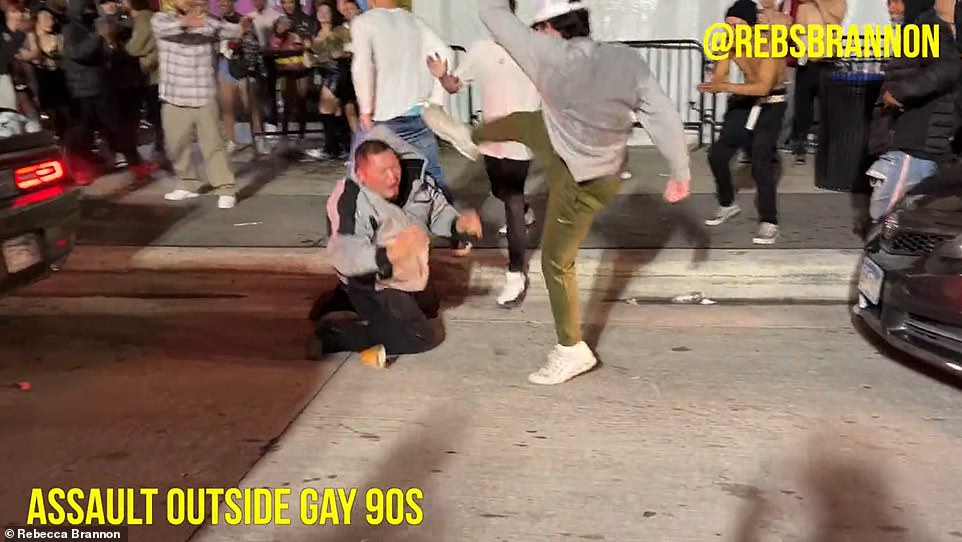 A shocking YouTube video reveals exactly how lawless downtown Minneapolis has become, with a police horse being bullied and insulted, people fighting, and illegal street races taking place close to where raucous women were seen twerking on top of moving vehicles.

In the video Rebecca Brannon put online, the scene outside The Gay 90s club on Saturday night seemed chaotic as ladies were seen twerking on top of vehicles and screaming at a police horse as an officer attempted to break up a fight involving the women.

After the altercation broke out in front of the pub, cops are seen in the video telling the females to “go out, keep moving,” but the group resisted and yelled at the police officers riding horses.

The cop shouts, “Don’t touch my horse,” as one of the females seems to attempt to pet his mount.

In another image, as police attempted to stage a fight, ladies can be seen yelling at a police horse.

On Saturday night, there were other displays of revelry outside the pub, and when the frightening video opens, it is evident that one guy is being attacked.

The guy was seen being kicked by a gang of men till he rolls into the street while already in the fetal position on the ground.

When the victim attempts to get up, one of his assailants kicks him in the head.

The movie then switches to EMS personnel carrying an attack victim on a stretcher and hoisting him into an ambulance after he is seen attempting to crawl away.

Brannon said on Twitter on Sunday, “It’s been a while since I ventured downtown at night considering the violence and shootings,” and that she “saw a lot ore mayhem than I anticipated, particularly given how chilly it was.”

Throughout the night, according to Brannon, “police were sparse,” and the “situation seemed combustible,” so she made an effort to maintain her distance.

There had been other shootings close by in only the previous three months, so there was also utter chaos outside the Gay 90s.

In the aftermath of the Defund the Police campaign, crime in the city has continued to get out of hand.

Following the death of George Floyd by officer Derek Chauvin in May 2020, Minneapolis was the focal point of those demonstrations.

Along with an increase in assaults of 8.8 percent, property crimes have increased by 14.8% since last year.

The city’s overall crime rate has increased by a startling 15.9 percent over last year.

And according to CNN, 93 people have reportedly been shot in the city in the last year, falling just short of the city’s murder toll in 1995, when it was given the label “Murderapolis.”

As of right moment, it has the 19th-best per-capita murder ranking out of 70 jurisdictions.

Meanwhile, since 2016, when around 54% of the cases were resolved, the clearance rate for murder cases has been declining.

According to experts, crime started to increase following George Floyd’s passing in May 2020, when the city turned became the focal point of the Defund the Police Movement.

Fireworks erupted around Minneapolis as demonstrators demanded Floyd’s justice and called for the dissolution of the Minneapolis Police Department.

After some resistance, City Council members finally agreed to “end police as we know it” in July 2020.

With the intention of transferring the funds to the municipal health department to support civilian violence interrupters who would mediate disputes, the council slashed $1.1 million from the city’s police budget.

Residents claim that soon after, cops started to leave the riskier areas.

According to lifelong resident KG Wilson, “the crooks were rejoicing.” “They were becoming wealthy.” They were brazenly selling narcotics.

In addition, due to retirements, resignations, and disability leaves as a result of Floyd’s passing, Minneapolis police saw a significant outflow of officers during the last two years.

Its council voted to dissolve the police force, however they later abandoned its ambitions.

From 900 policemen in early 2020 to roughly 560 in August of this year, according to police department leaders, the city’s police force has decreased by more than one-third.

The average 911 response time increased from 10 to 11 minutes earlier that year to 14 minutes in May 2020 as a consequence.

According to CNN, response times on the city’s crime-ridden north side exceeded 17 minutes in 2021 as they continued to rise.

Dispatchers are now instructed to hold all non-priority-1 calls citywide, including those about theft, suspicious activity, and property damage, on certain evenings because they are so busy.

Because of staffing issues and poor morale, the Minneapolis Police Department has sometimes even declined to react to specific offenses in a timely way.

It’s no secret that police enforcement, particularly in the past two and a half years, has been unfairly and severely demonized, according to National Police Association Sgt. Betsy Brantner Smith.

You can’t simply label an entire profession as racist and expect people to accept it without objecting.

Residents are now attempting to reclaim their city.

In November 2021, voters defeated a referendum that would have defunded the police and replaced it with a Department of Public Safety that was more “public health-oriented”.

This number was significantly higher in north Minneapolis, which has a large concentration of black residents and was the source of roughly 60% of police reports for shots fired this year.

Additionally, wealthy locals raised $210,000 online to compensate the city’s police force for additional patrols in the Lowry Hill area, where violence has been on the rise.

The initiative is described as a “temporary approach to handle the present crime wave as MPD works to rebuild to full personnel levels” by The Minneapolis Safety Initiative, a resident-created organization crowdsourcing for more police patrols.

To ensure that the campaign has the “desired effect,” residents are urged to provide $220 each month for six months.

Eight North Side homeowners even demanded that the city fill open posts at the police department in a lawsuit that was filed in the summer of 2020.

The lawsuit accused Mayor Jacob Frey and certain city council members of fostering a “hostile” atmosphere for police by endorsing the “radical demolish the police” notion.

This summer’s state Supreme Court ruling, which mostly sustained it, mandated that the city hire at least 731 more cops.