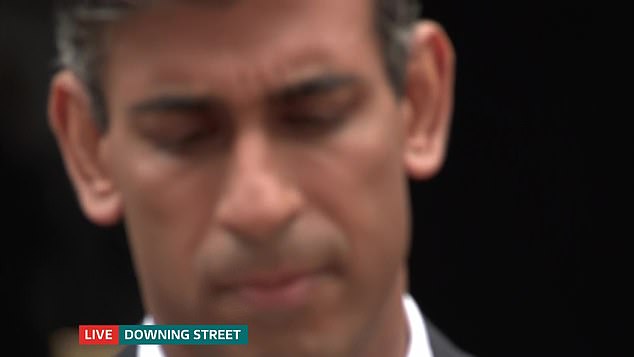 During this morning’s live coverage of Rishi Sunak’s ascension to the position of prime minister, broadcasters committed a series of gaffes, including camera malfunctions and mistaken identity.

In comes on a historic morning as Rishi Sunak met King Charles III at Buckingham Palace and became the new prime minister.

In his first statement outside of No. 10, Mr. Sunak stated that the United Kingdom is experiencing a “grave economic crisis” and that, as the new leader of the Conservative Party, he had “corrected the mistakes” committed by Liz Truss.

Close-up and fuzzy images of the new prime minister delivering his speech outside No. 10 were presented on ITV News’ coverage, which was beset by camera problems.

Earlier, Liz Truss gave a brief but combative goodbye address in Downing Street, in which she defended her record and stated that her administration responded “urgently and decisively” in response to the cost-of-living crisis.

In addition, the off-angle camera shots of Ms. Truss’s mouth during her address threw the audience in fits of laughter.

Why did the BBC cameraman zoom in so close to Liz Truss’s mouth? asked one person.

During live coverage, fans were quick to point out a series of errors made by broadcasters, including mistaking an adviser for Mrs. Sunak and stating that the new prime minister was on his way to meet “the Queen.”

Beth Rigby, the political editor of Sky News, was the first journalist to make an error when she stated that Rishi Sunak was due to “have his meeting with the Queen.”

She assured the gathering, “Rishi Sunak is poised to become prime minister; he just had his audience with the queen.”

Audience members were quick to point out and rectify her error.

One user stated, “Beth Rigby just made a very reasonable error when she stated that Rishi Sunak is “going to have an audience with the Queen,” and it made me a little bit sad, to be honest.”

Another user added, “Beth Rigby just stated that Rishi Sunak is due to meet with the Queen – oh well, we all make errors.”

In the meantime, viewers criticized BBC News anchor Huw Edwards for referring to Mr. Sunak’s assistant as his wife.

During live footage, Mr. Sunak exited a car at Buckingham Palace to be met by Royal Household officials, with a woman cutting casual attire following him.

Following the error, one individual stated, “I’m rather certain that’s not Mrs. Sunak,” and another commented, “Absolutely not, despite Huw Edwards describing her as such.”

Other viewers were perplexed as to why “Mrs. Sunak” looked to be wearing casual attire, to which one viewer responded, “It’s because it’s his advisor and not Mrs. Sunak; I’m not sure why they keep saying that!”

A third participant commented, “That is NOT Mrs. Sunak.” Huw has messed up.’