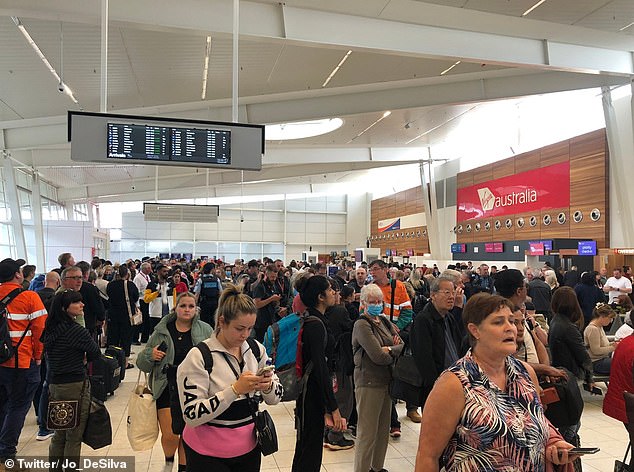 Just hours after the same incident occurred in Melbourne, chaos has broken out at Adelaide Airport, with all passengers who had gone through security being told to leave the terminal.

Early on Tuesday morning, Qantas passengers at Melbourne’s Tullamarine Airport were told to get off planes and leave the terminal. A guy is said to have accidentally entered the airport via the baggage claim area and was then misplaced by security.

Passengers at Adelaide Airport said that three hours later, hundreds of travelers were required to leave the terminal and retail areas and go through security again for “operational reasons.”

An airport spokeswoman said that the breach is thought to be related to the malfunction of a piece of security equipment.

Hundreds of passengers are seen waiting in huge lines at the airport to be rescreened.

Soon after 10am, security screening started, and travellers were advised to anticipate aircraft delays.

Another person said, “Everyone celebrated as security just reopened. I hope the day isn’t too difficult for the security team dealing with angry people! Be courteous, travelers.

Prior images and video from Melbourne showed long lines at the security gates and a large number of people waiting to be rescreened.

The airline said in a statement that “a customer seems to have accidentally gone from an unscreened area to a screened portion of the airport in Melbourne.”

All Qantas operations have been suspended as a precaution, and travellers in the terminal are now undergoing re-screening, which is creating delays this morning for certain routes.

“Safety is our first concern, but we recognize that this interruption is inconveniencing some of our passengers and apologize for that.” We are looking into how this situation happened.

Tim Joyce had just gotten on the aircraft for Brisbane when the captain gave the order to disembark ‘a minute’ before takeoff.

The pilot very much informed us right immediately that someone had sneaked past the airport, the passenger said.

He said on the Today program that “they have evacuated every single individual that has passed through screening so that everyone can be rescreened.”

There are hundreds of people waiting at 6 am, so it feels fairly serious.

He emphasized that despite the pandemonium, the airline had excellent communication.

The next aircraft out will be examined first, Mr. Joyce said, “basically they’ve stated that passengers will be vetted on a boarding basis from now on.”

It was worth the couple hours of waiting, so I’m pleased they evacuated the airport to ensure everyone’s safety.

In order to connect to an aircraft to Norfolk Island, Sue Duke was also traveling to Brisbane.

She told Sunrise, “We’re just hoping Qantas would postpone that flight since there is a large tour group traveling.”

While at least seven other planes have also had delays, her 6am flight was delayed by an hour and a half.

Ian Robson, the CEO of Rowing Australia, was delayed in the airport chaos while attempting to catch a flight to Canberra.

According to a few statements made in the last five minutes or so, there was an unintentional security breach that was reportedly committed by a limited number of passengers. As a result, everyone who had previously been approved for security, including those aboard flights, had to be evacuated.

“I recommend a lengthy late morning,” she said.

According to Melbourne Airport, passenger screening in T1 had resumed around 7.30am.

There will likely be delays this morning. The airport issued a statement saying that the Qantas crew is working hard to deliver everyone to their destinations.

How the security breach happened is now being looked into by the Australian Federal Police.

Earlier this month, on a Qantas trip from Sydney to Melbourne in the evening, passengers were led off the aircraft by police after one passenger managed to get through the security checks.

Once the aircraft was in the air, the mistake was revealed.

At the time, a Qantas official said that a customer accidentally entered a screened area of the Sydney airport after leaving an unscreened area.