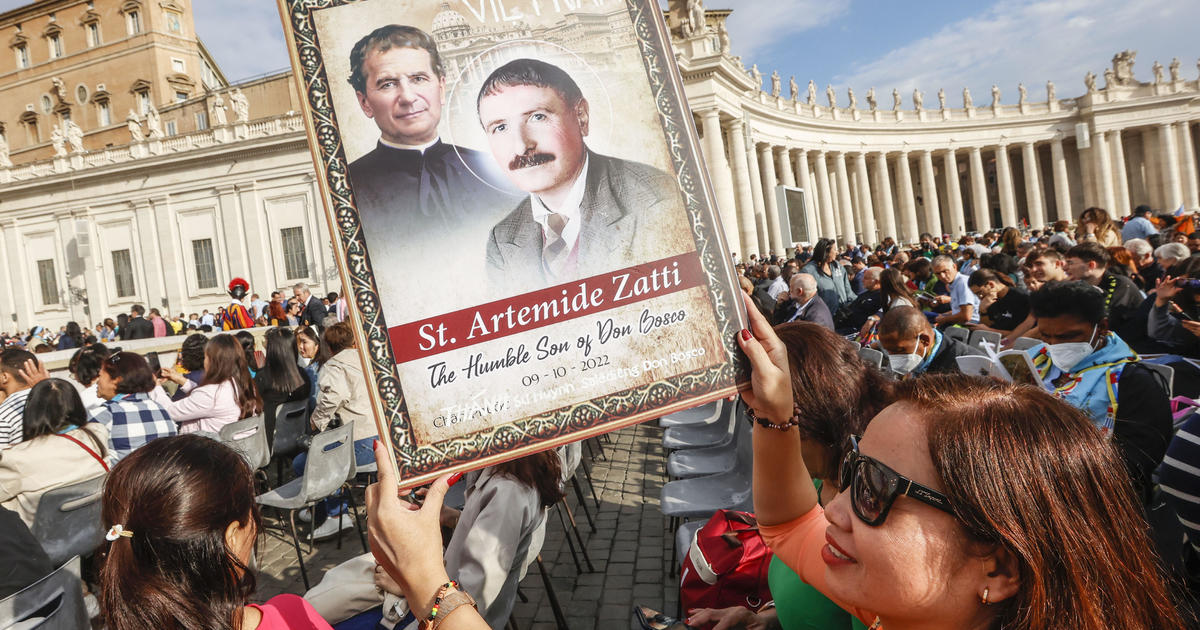 Pope Francis condemned Europe’s indifference toward migrants risking their lives to cross the Mediterranean Sea on Sunday as he elevated to sainthood an Italian bishop and Italian-born missionary whose life and work exemplified the difficulties Italian emigrants endured in the 19th century.

Francis deviated from his scheduled remarks to condemn Europe’s treatment of migrants as “repugnant, immoral, and criminal.” He observed that non-Africans are frequently let to perish during risky sea crossings or sent back to Libya, where they end up in “lagers,” the German name for Nazi death camps.

Additionally, he recalled the situation of Ukrainians fleeing the war, which he stated “causes us enormous suffering.”

“The exclusion of migrants is scandalous,” Francis said, eliciting applause from the faithful gathered in St. Peter’s Square for the canonizations of Don Giovanni Battista Scalabrini, an Italian bishop who founded an order to help Italian emigrants in 1887, and Artedime Zatti, an Italian who emigrated to Argentina in 1897 and devoted his life to helping the sick there as a lay-worker.

On October 9, 2022, the faithful await the beginning of a Mass conducted by Pope Francis for the canonization of Giovanni Battista Scalabrini and Artemide Zatti at St. Peter’s Square in Vatican City Vatican. Photograph taken by Riccardo De Luca/Anadolu Agency and published by Getty Images.

“The position of migrants is indeed criminal. They are let to die before our eyes, making the Mediterranean the world’s largest cemetery. The plight of migrants is revolting, sinful, and criminal. Not to offer assistance to those in need. No, we transport them to lager, where they are enslaved and sold as slaves.”

Since 2014, the International Organization for Migration (IOM) has received reports of over 24,000 missing migrants in the Mediterranean region. More than 17,000 deaths and disappearances have been recorded throughout the Central Mediterranean since 2014, according to the organization.

In one of the deadliest accidents in the eastern Mediterranean in recent years, Syrian authorities reported recovering 100 bodies from a Lebanese migrant boat that fell off Syria last month.

He asked the faithful, “Do we embrace them as brothers, or do we exploit them?” on the treatment of migrants.

The pope stated that the two newly canonized saints “remind us of the significance of traveling together.”

Francis remarked that Scalabrani possessed “great vision” foreseeing “a world and a Church without frontiers, in which no one was a foreigner.” After being healed of tuberculosis, the pontiff described Zatti as “a living example of thankfulness” who committed his life to serving others.

Scalabrini founded the Missionaries of Saint Charles Borromeo, also known as the Scalabrian Fathers, and the Missionary Sisters of Saint Charles Borromeo Scalabrians to minister to the many Italians who left their homeland due to what he described as the combined effects of an agricultural crisis, social change, a poorly managed economy, excessive taxation, and “the natural desire to better one’s condition.”

Scalabrini, troubled by the fact that Italian emigration soared to 84,000 in 1884 alone, argued that widespread emigration and the fragmentation of families would “help litter the lands of America with their bones.”

Bishop at the time of his death in 1905, he was beatified in 1997 by Pope John Paul II. Pope Francis waived the canonization requirement that Scalabrini be credited with a miracle following his beatification.

His order currently maintains 176 missions worldwide, including 27 shelters for migrants and 20 schools and centers for children.

Francis, himself the son of Italian immigrants to Argentina, recalls being inspired by Zatti’s life while he was Jesuit provincial superior in Argentina. He stated that the number of men joining the Catholic order increased after he prayed for the late bishop’s intercession.

Zatti, one of eight children born to an agricultural marriage in northern Italy, immigrated to Argentina as a teenager in 1897.

Zatti was taken to a Salesian-run hospital in northern Patagonia to receive treatment for tuberculosis after joining the Salesian order at age 20. If he recovered, he vowed to help the sick and needy for the rest of his life. Zatti subsequently spent 40 years working at the same hospital as a nurse, in the pharmacy, and then as an administrator.

His reputation for helping the sick drew patients from all around Patagonia. Zatti was rumored to roam the city of Viedma on his bicycle while carrying a medical case in order to assist the sick. On Sunday, the pontiff also recalled a time when Zatti was observed carrying a deceased patient out of the hospital on his shoulders to avoid other patients from seeing the corpse.

Zatti passed away in 1951 and was canonized in 2002. Francis paved the route for canonization by signing the decree recognizing Zatti’s intercession in the cure of a man with a brain hemorrhage in the Philippines.