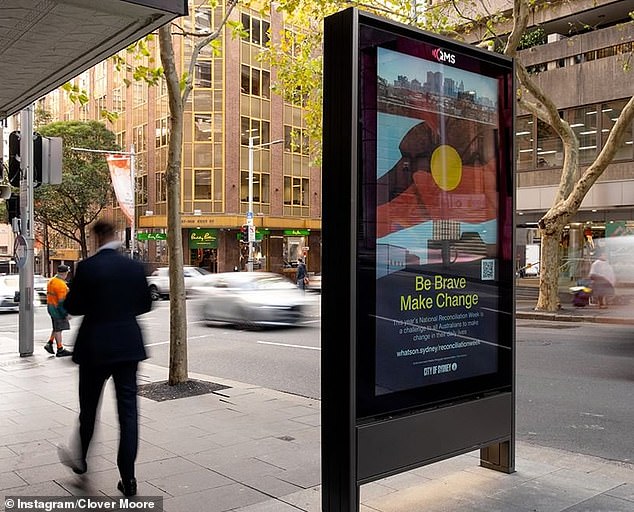 In the largest city in the nation, pedestrians are outraged at having to walk “in single file” due to new billboards that have been erected in the midst of sidewalks.

The new billboards, also known as “communication pylons,” are a part of an effort to update Sydney’s streets while also bringing in advertising money for the city council.

But many pedestrians have expressed dissatisfaction with the size and placement of the billboards that have been springing up in Potts Point, Surry Hills, and the CBD.

Older, phone booth-mounted advertising panels that had been in use for at least 20 years were replaced with these modern ones.

On Wednesday, Clover Moore, the Lord Mayor of Sydney, posted on her Instagram account about her opinions on their most recent creations.

She said in the statement that “[City of Sydney] Council] overwhelmingly agreed in June 2020 to give QMS Media a ten-year contract that secured additional revenue for the City and a full refurbishment of street furniture.”

‘The total worth of the deal to the City is up to $450 million, which covers ongoing upkeep like cleaning and infrastructure repairs, as well as the money from advertising.

“This is a significant source of revenue for the City, helping to maintain rates among the lowest in the metropolitan region while funding our vast capital works, social and environmental initiatives.”

JCDecaux tried to sell the city its 20-year-old advertising furniture for $50 million, but the deal was rejected because it didn’t adhere to the current Disability Discrimination Act regulations.

The decision to accept QMS’s bid for the new billboards was then taken by the City of Sydney.

‘The City’s Design Advisory Panel spent months working with QMS on the new designs, to create a contemporary aesthetic and assure compliance with current design standards and accessibility needs, such as enhanced sightlines to buses and wheelchair accessibility,’ Ms. Moore added.

“Most of these panels were put up in the same spot and are about the same width as the original phone booth billboards.”

Yes, they are pretty enormous, and in certain places you may have to go in single line, much as with the traditional telephone-mounted panels.

The people expressed harsh condemnation of the Lord Mayor’s position.

I had to maneuver past one of your new “communications pylons” by pushing my children’s stroller into the roadway. There is no way in my opinion that this will increase accessibility or comply with the Disability Discrimination Act. I’d detest having to navigate the CBD in a wheelchair right now. One customer complained, “I submitted an email to council and never got an answer.”

Another remarked: “I find it ironic that these billboards advertise that they would improve accessibility for locals.” They sometimes obstruct half of the sidewalk. what reason? so that the City of Sydney may profit from advertising? Not to mention that they are ugly. Although I appreciate your efforts, Lord Mayor, this is a (ugly) error.

Another added: “They are dangerously large and take up entirely too much valuable room for foot traffic, particularly when I have to go around one right next to the approaching buses and taxis. I think the answer is some kind of holographic substitute you can walk straight through.

The screens were placed in conformity with the City of Sydney’s street furniture placement rules, according to Ms. Moore, who claimed that the city had worked hard to make sure they were compliant.

She said that the location of all bus shelters, communication pylons, kiosks, and automated public restrooms was subject to the development application procedure, which included public input and a decision reached by the independent Local Planning Panel.

The requirements of the City are always being negotiated. Some advantages call for compromises.

I promise you that we are listening to and acting on your input on the furniture enhancements, and I hope you see the importance of this contract to our efforts in creating a wonderful place to live, visit, and work, Ms. Moore said.