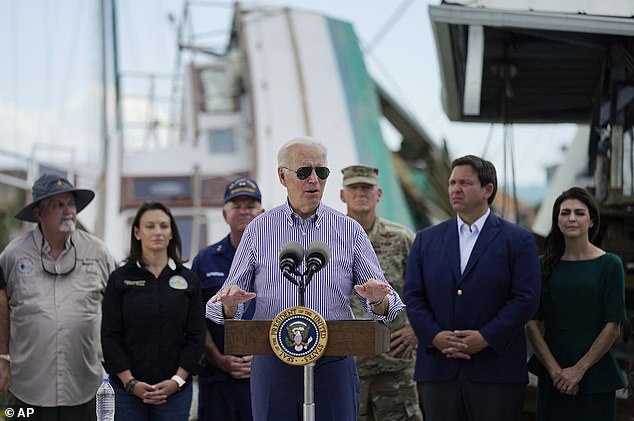 The Florida mayor who overheard President Joe Biden use an f-word in passing while it was being recorded on a hot mic said it was simply “two people chatting” and not a big deal.

Biden seemed to forget that TV crews were close while having a lighthearted talk with Fort Myers Beach Mayor Ray Murphy on Wednesday as he toured the Hurricane Ian disaster area.

The president said, “Nobody f***s with a Biden,” to which Murphy laughed and said, “You’re godd**n right.”

Although Biden was overheard adding, “and you can’t dispute with your brothers outside the home,” the whole context of his speech was not quite obvious.

Murphy told NBC News after Biden’s visit that he couldn’t remember what exactly caused the president to “drop the bomb,” as he put it, but that he wasn’t upset by the vulgarity.

“It wasn’t aimed at anybody.” Just two people conversing,” Murphy reportedly said to the media source. It didn’t bother me at all. That’s exactly how two men from different backgrounds communicate with one another.

We are both Catholic Irish people. Both of us are devoted Catholics. But sometimes some coarse language slips out,” he said.

Murphy said that he had never met Biden before; he added that this was unusual considering they knew a lot of the same people.

Speaking with Joe Biden, the mayor—whose position is formally nonpartisan—said they also found common ties in Rehoboth, Delaware, where the president has a beach home.

“One thing led to another.” We were acquainted with one another. And I thought it was fantastic because maybe they won’t forget about us,’ Murphy said, adding that he related to the president.

A significant portion of the neighborhood at Fort Myers Beach, a tiny barrier island village, was left to rubble by last week’s storm, which caused some of the worst destruction.

On Wednesday, Biden traveled to Florida to give speeches alongside Republican Governor Ron DeSantis. As they shook hands and stood face to face for the first time, the two put their competition aside for the day.

DeSantis, who is anticipated to run for the Republican presidential nomination in the future, has garnered widespread attention for his strident criticism of the Biden administration.

Nevertheless, Biden and DeSantis managed to get through their speeches on Wednesday without making any overt digs at the opposing camps, though they did take a few subtle jabs, notably ones about climate change.

At one point, the president became practically friends with DeSantis, calling him “guv” as he spoke on the podium to praise how effectively they collaborated to deal with the storm’s destruction while often insulting one another.

He also applauded the governor of Florida for his efforts to acknowledge and address climate change, claiming that this was the “greatest thing he’s done” since it “accepted this phenomenon called global warming.”

Even Biden commented, “I believe he’s done a wonderful job,” in reference to DeSantis at one point.

We have a completely different political worldview, but we have collaborated well anyway, he said.

In comments before the president, DeSantis commended the Biden administration for paying the full cost of “debris disposal and emergency protection measures” in the 60 days after the storm’s first day in the state.

Welcome to Florida, Mr. President. DeSantis introduced Biden and stated, “We value working together across multiple levels of government.

When Biden took the microphone and began discussing the destruction he observed on his helicopter tour of the ruins, he stated in an amicable tone, “Well, Guv and the first lady, thank you very much for the hospitality.”

The storm, which struck Florida on Tuesday with a death toll of 109, was the worst to strike the state since 1935.

On Wednesday morning, a week after Hurricane Ian made landfall in Florida, around 318,000 homes and businesses were still without electricity.