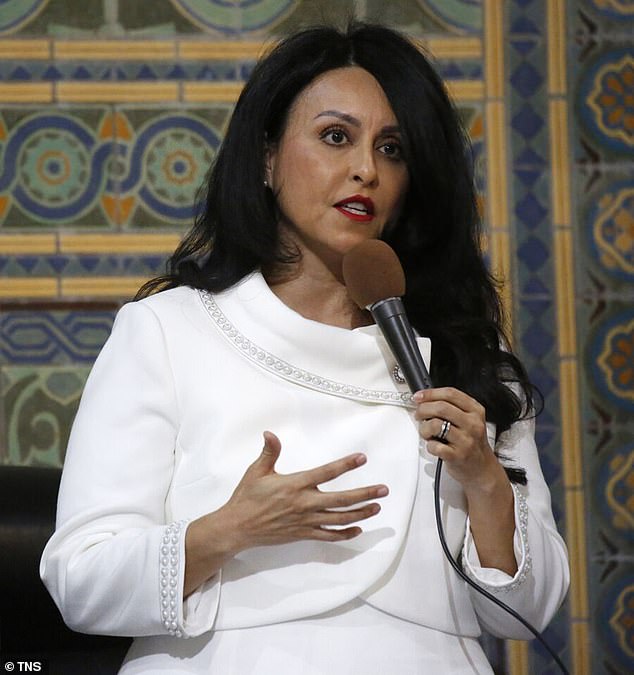 In response to overwhelming anger and calls for her removal, Los Angeles City Council President Nury Martinez has announced her resignation, which will take effect immediately. She was caught on camera making racist statements about a fellow council member and his black kid.

After a discussion between Martinez, Councilman Kevin de León, and other municipal officials was taped in October 2021 and made public, the revelation was made in an email from the leftist councilwoman’s office on Monday afternoon.

The two were compelled to apologize on Sunday for their derogatory comments against their coworker Mike Bonin, including Martinez’s use of racial slurs at Bonin’s young kid.

Martinez, 49, lambasted the white councilmember’s parenting, stating, “They’re treating him like a little white child,” and “This kid deserves a beatdown.” Martinez and the other Latino leaders present at the time of the recorded talk seemed unaware that it was being recorded.

She said that the councilman’s kid was “like a monkey” or “parece changuito.”

In addition to that apologies, Martinez sent a groveling statement on Monday morning, admitting she was sorry for the statements and announcing her resignation in reaction to criticism of the racial insults.

There are no justifications for the words I made, and I accept responsibility for what I said. So sorry again.

I truly apologize to Mike, Sean, and your kid in particular, as well as to my colleagues and their families. I’m sorry; as a mother, I should know better. I feel terrible embarrassment. I am aware that I am to blame for this. I apologize to you and your family as a whole for what has happened.

As someone who strongly supports the empowerment of communities of color, I am aware that my remarks undermine this objective. Reconciliation will be my top focus moving forward. In order for us to mend, I have already made contact with several of my Black coworkers and other Black leaders to apologize.

I humbly beg for pardon from my coworkers and the people of this city, which I adore. The actions I do going ahead, not my excuses, will be what matters most in the end. I’m hoping you’ll give me a chance to make things right.

I now resign as President of the Los Angeles City Council, effective immediately.

The original topic of the discussion in October 2021 between Martinez, Councilmen Gil Cedillo and Kevin de León, and President of the Los Angeles County Federation of Labor Ron Herrera, was their opinions on maps that the city’s redistricting commission had proposed.

The video was first posted on Reddit in early October, but it gained further attention when Knock LA broke the story on Sunday.

Martinez herself fought for a legislation that basically outlawed demonstrations in residential neighborhoods, and the demonstrators present were disobeying it.

According to one demonstrator, Jacky Rodarte, “We can’t keep letting these folks do whatever they want.” It’s brazenly insulting and, to be very honest, wicked.

Other protestors informed the station that they will carry on their cause at her home, place of business, and place of worship until she resigns.

That is why we are out here, she said. We want to let her know that we will remove her from her position and she won’t be sitting there for much longer.

Additionally, protesters used a megaphone to blast the tapes’ audio.

Coincidentally, Martinez suggested a bill prohibiting protestors from approaching targets within 300 feet of their house in August 2021, according to the Los Angeles Times.

A vote of 13 to 1 approved the measure. The Times reported Martinez as stating, “I’m simply absolutely done.” She continued by claiming that her vehicle had been destroyed and that demonstrators had previously cursed at her daughter.

People’s City Council – Los Angeles, the organization in charge of the most recent demonstration, tweeted: “LAPD is informing us that we cannot demonstrate outside Nury Martinez’s home.” They are using the law to say that we are not allowed to stage targeted protests.

The statement from the gang said, “This is bulls**t! When Nury Martinez resigns, we’re out!

On multiple occasions, Martinez is heard disparaging fellow council member Mike Bonin in the tape, calling him a “little b****” before sensationally accusing him of carrying his adoptive kid around town like “an accessory.”

According to the leaked recording, De León seemed to concur with his colleague’s remarks when he likened Bonin taking his child around LA to “when Nury takes her little yard bag or the Louis Vuitton bag.”

Martinez continued the conversation by calling the kid “that little monkey” and “su negrito,” both of which are disparaging terms for black people in Spanish.

The Latina Democrat said that Bonin had been treating his son “like a little white child” and that he needed a “beatdown.”

The mayor of the municipal council said, “Let me take him across the block and I’ll return him back.”

‘In a moment of tremendous irritation and rage, I allowed the situation get the better of me and I hold myself responsibility for these statements,’ she said in an apology on Sunday. For that, I apologize.

Concerns about the redistricting process and its detrimental effects on communities of color were brought up throughout the meeting, she said. “My art is self-explanatory.” I’ve put a lot of effort into guiding our city through its most trying period.

In response, Bonin told the LA Times that the tape release left him feeling “disgusted, enraged, and heartsick.”

It’s okay to attack me, but why not my son? He continued by demanding the resignation of each of the three Latino city council members. “To attack a youngster, you have to be extremely petty, insecure, and poisonous.” Not even three years old.

Other than that, I’m at a loss for words.

Although it is still unknown who captured the audio and how, it was initially posted on Reddit.

Wow, you know it occurs, but it’s incredible to hear it in person, a now-suspended Reddit member captioned the audio that was shared. “City Hall and the labor movement are bedfellows,”

The former member of the Los Angeles Unified School District Board of Education said, “F*** that man, he’s with the Blacks.”

De León expressed regret for his remarks on Sunday, calling them “wholly unacceptable” and admitting that he “failed to live up to the standards we set for our leaders.”

In a statement, he said, “I regret seeming to condone and even contribute to some inappropriate remarks made about a colleague and his family in private.” “I personally reached out to that coworker,” I said.

Cedillo, however, claimed to the LA Times that he had no memory of the exchange.

Martinez has been urged to step down by new councilmember Eunisses Hernandez, who defeated Cedillo in the June election.

She said on Twitter that Council President Nury Martinez must step down and that Kevin De Leon and Gil Cedillo need to be dropped from committees.

“This is the reason why Angelenos voted out CM Gil Cedillo,” she said.

It is unacceptable for us to have leaders who hold racist beliefs and use their positions to harm Angelenos.

The LA Times, on the other hand, argued that “it is a basic principle of the United States that we do not restrict or penalize the receiving and publishing of important material,” as stated by its General Counsel Jeffrey Glasser.

Eric Garcetti, the mayor of Los Angeles, would not say whether the three city council members should continue in their positions or step down.

“There is no room for bigotry anyplace in LA,” he told the LA Times. “There is no place in our city family for assaults on coworkers and their loved ones.”

Michael Moore, the chief of the Los Angeles Police Department, stated of the recording that was leaked: “Today’s disclosure of the words by our members of our council leaders wounds me to my very core.” This is not the Los Angeles I am familiar with or what the ladies and men of the LAPD believe. Such comments are inappropriate in any situation. For our City of Angels, it was a dark day.