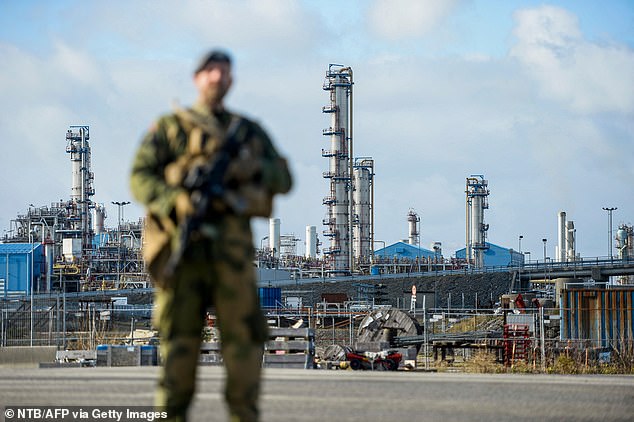 According to Norwegian Police, a close associate of Vladimir Putin’s has had his British-Russian son detained in Norway for using a drone in a prohibited location.

According to police and court records, Andrei Yakunin, 47, was detained on Monday in Hammerfest in northern Norway.

The son of former Russian Railways CEO Vladimir Yakunin, who is said to be close to Putin, has been charged by police with unlawfully using a drone in the geopolitically significant Arctic island of Svalbard.

He is the seventh Russian to be detained in the previous few days on suspicion of using drones or taking pictures in prohibited areas in the Scandinavian nation, which shares a northern border with Russia.

Foreign intelligence using drones to spy on Norwegian airports is unacceptable. According to Store, flying drones is not permitted for Russians in Norway, as reported by the Norwegian station NRK. We don’t want anybody to fly this kind of plane over significant Norwegian infrastructure.

Yakunin is the CEO of VIY Management, a real estate and private equity investment firm that promotes international investment in Russia.

He formerly had a home on Bishop’s Avenue in North London, a “billionaires’ row” between Hampstead and Highgate, according to the New Yorker in 2015. Highgate School is said to have been attended by his son.

After Britain slapped sanctions on a number of Russian businesspeople in response to Putin’s invasion of Ukraine in February, it is unknown whether he still owns the home.

Yakunin openly declared his opposition to the invasion in July, telling Italian television that he “never voted for Putin,” according to a report by the Russian investigative journal Insider.

One of Vladimir Putin’s closest pals in the past was Yakunin’s father, Vladimir Yakunin. From 2005 until 2015, he served as Russian Railways’ president. Britain imposed sanctions on him in April after the US had done so in 2014.

Norway, like with numerous other Western countries, has banned Russians and Russian businesses from flying over its territory as a result of Moscow’s drone or aircraft invasion of Ukraine.

Unauthorized photography may result in a one-year penalty, while violating that restriction carries a three-year jail sentence.

The findings, when combined with the suspected sabotage on the Nord Stream 1 and 2 pipelines in the Baltic Sea, have caused Oslo to increase security around vital infrastructure, especially its offshore oil and gas facilities.

The four were taken into jail for a week last Thursday after being stopped in a vehicle with Russian license plates in northern Norway, according to a statement from the regional police.

Police have not said what the three men and one lady from Russia were searching for, but they had taken pictures of things that were off-limits to photographing.

The four individuals, who were in their late 20s, had traveled from Finland to Norway in late September or early October.

According to police spokesman Gaute Rydmark, they were detained with a “significant” number of images, although they have maintained they were just tourists and had not done anything unlawful.

Emilie Enger Mehl, the justice minister for Norway, declined to comment on the situation but said that “there is increased pressure on Norway, from an intelligence point of view.”

In contrast to the other two Russians detained last week, also in the country’s north, the police said that the four did not possess any drones.

In addition to the four detained last week, two more Russians have been taken into custody recently in Norway. Last week, during a routine check at the border, Kirkenes police apprehended a 50-year-old Russian after discovering two drones in his baggage.

They claimed that the drones had hours of video from various sites around Norway.

A 51-year-old Russian was held at the airport in Tromso on Friday while traveling to Svalbard for the same reason.

The number now stands at seven after Andrei Yakunin’s detention. Anja Mikkelsen, a police spokeswoman, said that “the suspect [Yakunin] has confessed operating a drone in Svalbard.”

Drones and other equipment that were in Yakunin’s hands have been seized, according to the police, and he has been detained for two weeks.

The Svalbard archipelago, a Norwegian region strategically situated in the heart of the Arctic, lies roughly 620 miles from the North Pole.

It has a sizable Russian population, and because of its unique legal position, foreign nationals may harvest some of its natural resources.

The Russian embassy in Oslo said on Monday that Norway’s “hysteria” was having an effect on “ordinary visitors,” and that the ban on Russians using drones was “unjustified and discriminatory.”

According to the airport’s website, it has 15 gates and is Norway’s second-largest airport, handling more over six million people annually.

In the last few weeks, there have been several reports of drone sightings close to Norwegian offshore oil and gas facilities and infrastructure.

50 probable drone sightings have been recorded at commercial airports so far this year, with 27 of them occurring since July, according to airport operator Avinor, who spoke to NRK on Tuesday.

Emilie Enger Mehl, the justice minister for Norway, urged citizens to be alert for any suspicious activity on Monday and reported that the domestic security agency PST had received a number of fresh drone tips.

The investigation into the drone sightings in Norway’s far north has now been handed over to the domestic security agency of the country.

There is “an elevated intelligence threat from Russia,” according to Hedvig Moe, deputy chief at PST, the acronym for the intelligence agency, and “Russia is in a pressed situation as a result of the war and is isolated by sanctions” over its war in Ukraine.

A complicated and confusing danger picture that may alter quickly is there, she added, adding that the security-political scenario is stressful.

Following the drone sightings and the Nord Stream gas pipeline explosions in the Baltic Sea last month, which were generally believed to be the product of sabotage, Norway has also increased security at its offshore oil and gas drilling sites.

After the invasion caused Moscow to reduce energy imports, the Scandinavian nation has surpassed it as the primary natural gas provider to Western Europe.

Stavanger, the center of Norway’s oil industry, saw a temporary closure of its airspace on Sunday when a drone was seen in the area’s southwest.

Friday’s satellite images revealed that Vladimir Putin of Russia had increased the number of his strategic nuclear bombers stationed at an airbase close to the borders with Finland and Norway.

The action was taken in the midst of intense uncertainty about whether Putin intended to launch an atomic assault in Europe and his ongoing invasion of Ukraine, which has recently encountered a number of humiliating failures.

The information was disclosed by the independent Norwegian fact-checking website Faktisk.no, which had acquired it from American satellite operator Planet.

The worldwide outcry over a previous allegation from The Jerusalem Post two weeks ago that there had been a ‘unusual deployment’ of seven nuclear bombers at the airfield has led to the buildup above at the site.

This was brought to light by the Israeli spy agency ImageSat International, which discovered the TU-95 and TU-160’s “irregular presence.”

Located 450 miles southeast of Moscow at Engels Air Base, the Armageddon aircraft are often stationed there.

Now, however, the bombers are positioned approximately 95 miles from Finland, a future member of the Alliance, and around 115 miles from the border of NATO member Norway.