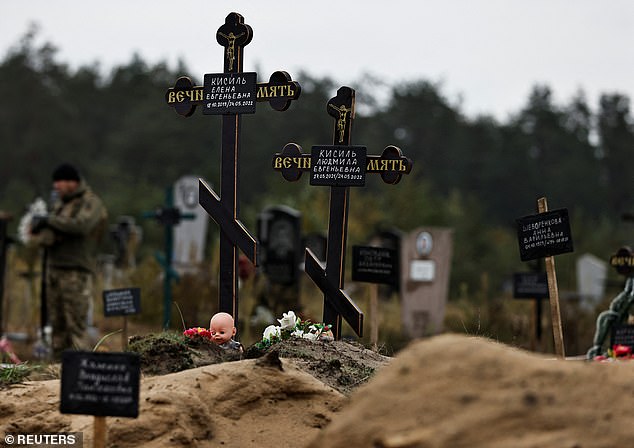 A sickening and devastating UN investigation has shown that Russian troops gang-raped a 22-year-old Ukrainian woman, sexually assaulted her husband, and forced the pair to have sex in front of them before raping their 4-year-old daughter.

The heartbreaking account describes how Russian forces violated an 83-year-old lady in her home in front of her physically challenged husband while invading a community in the Chernihiv area.

In a horrifying testimony, a 56-year-old lady from a hamlet near Kyiv also described how three Russian troops stormed into her house, and two of them gang-raped her as the third one looked on.

These accounts, along with several others in the study, demonstrate how, in the eight months since the brutal invasion started, Russian forces have used rape as a weapon of war.

The study also describes how Russian military executed people without a trial or due process in the Ukrainian cities of Kyiv, Chernihiv, Kharkiv, and Summy, with a 14-year-old kid as the youngest victim.

Members of the Independent International Commission of Inquiry on Ukraine said in the report that they had also discovered patterns of torture, cruel treatment, and wrongful detention carried out in regions held by Russian military troops, all of which constitute war crimes.

The study described how Russian forces abducted women and children and raped them in their homes or in abandoned buildings, prompting some of the victims to ponder killing themselves.

When men attempted to protect their wives and prevent them from being raped, the Russian troops would often shoot them dead or threaten to do so.

Two Russian troops broke into a young family’s house in the Kyiv area in March of this year and raped a 22-year-old lady many times before torturing her husband sexually.

The traumatized couple was then coerced by the two soldiers into having intercourse in front of them.

The couple’s four-year-old daughter was then forced to have oral sex with one of the troops.

According to the study, “in most instances, these sexual acts also constitute torture and harsh or inhumane treatment for the victims and for family who were made to witness.”

An attempt was made to pull a 50-year-old lady from her home by a Russian soldier in another hamlet near Kiev. Her husband fought valiantly to protect his wife, but the Russian soldier killed him.

According to the complaint, the soldier led the victim to a neighboring abandoned home where he sexually assaulted her until a Russian military unit came and hauled him away.

Due to his injuries and unable to be transferred to the hospital, her spouse passed away two days later.

An 83-year-old lady in the Chernihiv district described to investigators how she was raped by occupying Russian soldiers while her physically challenged husband was also there in her home.

A 56-year-old woman in the Kyiv area described to authorities how three Russian troops broke into her house. While the third one watched, two of them gang-raped her.

The troops robbed all of her food and money before they left the home.

Weeks later, the lady found out that Russian troops had tortured and killed her husband.

Rape has also been used as a weapon of war by Russian troops in the past. After Hitler’s Third Reich was overthrown at the conclusion of World War II, an estimated two million German women were sexually assaulted by Soviet Red Army soldiers.

Due to the fact that many women are afraid of being stigmatized for speaking out about their experiences, the full extent of rape during wartime and now in Ukraine will continue to be unknown.

One Ukrainian victim of a Russian military rape told the Commission that she felt “very afraid and intimidated” after the incident.

According to the study, victims of sexual abuse must wait until they feel secure and well-cared-for before speaking out about what occurred.

The Ukrainian survivors were treated by a psychotherapist who claimed: “All victims with whom I am dealing are blaming themselves for being seen by attackers and being raped.”

Forced impregnation is a weapon used in systematic mass rape operations to ethnically cleanse a country and mentally traumatize generations of people.

According to experts, since they serve as a “living reminder of the battle,” the children born as a consequence of this act of rape during warfare are often stigmatized themselves.

In February, Russia invaded Ukraine after Putin authorized what was meant to be a few-day “special military operation” to overthrow the government.

However, he is now enmeshed in an eight-month battle that seems to be going on for at least a few more months while also incurring significant casualties.

As a result of the crimes that Russian forces have perpetrated in the regions they have taken, Ukrainian resistance has proven to be more ferocious than almost all observers had predicted.

After Putin’s soldiers left the neighborhoods around Kyiv in April, mass graves containing the remains of hundreds of people were discovered.

In order to question and torture anybody suspected of cooperating with the government or military, Russian troops would seek them down, according to survivors of the occupation; some of them were even murdered.

Others described how troops broke into their houses, stole from them, beat or raped them, and then left when Ukraine’s forces pushed forward.

Moscow, according to Kyiv, is engaged in a genocide that aims to eradicate their national identity via the systematic rapes, deportations, and killings of innocent people.

Putin disputes the idea that his military purposefully targets people.