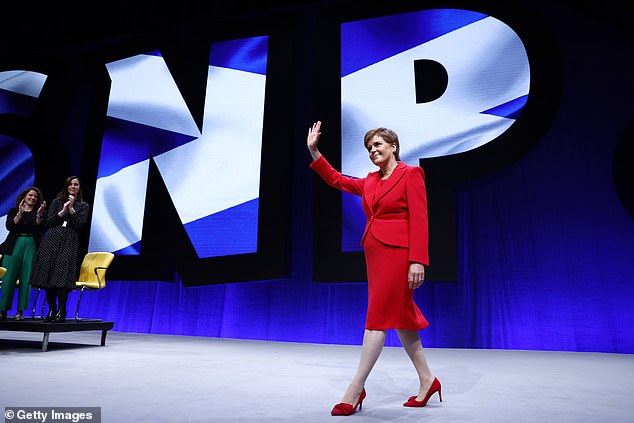 The Scottish First Minister blasted the Prime Minister’s “unconscionable” economic policy during her keynote address at the SNP convention in Aberdeen.

As she argued that independence was “necessary” for Scotland, she also denounced “aggressive Unionism” from Westminster.

Ms. Sturgeon launched another attack on the Conservatives after receiving a ferocious response over the weekend for saying, “I despise the Tories.”

In her conference address this afternoon, the First Minister did not back down from more criticism of Ms. Truss’s party, despite the conflict.

She criticized Sir Keir Starmer’s Labour for “aiding and abetting” the Tories while mocking the “chaos and tragedy” emanating from Westminster.

In her speech to the conference, Ms. Sturgeon reaffirmed her commitment to organize a second referendum on Scottish independence on October 19th, 2019, should the UK Supreme Court uphold the Scottish Government’s right to do so without consent from Westminster.

The First Minister vowed to “never – ever give up on Scottish democracy” and said that she would “present our case for independence to the people in an election” if judges, as is anticipated, find against Ms. Sturgeon.

Ms. Sturgeon made light of the fact that this was her first in-person conference leader’s address since 2019 and quipped that the “one negative” of not doing her Covid-mandated Zoom lectures was “having to exchange my slippers for these heels.”

‘Our last party meeting was in October of this year. The SNP leader said that the Tories had just chosen a new leader at the time.

“Westminster had collapsed.” Despite catastrophic economic warnings, a new prime minister was pushing through a dismal policy plan.

“And here we are once again.” Another round on the Tory woe-is-me wheel.

“This time, the carousel is moving more quickly. The Tories didn’t realize Boris Johnson was a catastrophe for three years. It only took them three weeks with Liz Truss.

Ms. Sturgeon criticized the latest mini-Budget of Ms. Truss and Chancellor Kwasi Kwarteng for attempting to pay for the tax cuts with “borrowing to be returned by eye-watering austerity cutbacks and an assault on the wages of the poorest” and called it “unconscionable.”

The First Minister said, “The Prime Minister’s reasoning is that she is aiming for development.”

“Let me explain the kind of growth that will occur.” growing disparity between the affluent and the poor.

“A rise in the poverty rate. Pressure on our public services, including the NHS, is increasing.

And without a doubt, a rise in the general public’s level of abject disdain.

Ms. Sturgeon emphasized that protecting the “partnership” between UK countries was best achieved via Scottish independence.

She said that the present state of “aggressive unionism” was “undermining that cooperation.”

Westminster’s rejection of Scottish democracy, its outright criticism of devolution, and its general lack of respect, she said.

“That is what is producing the tension, if there is any.”

The notion of our countries cooperating for the common good may be revived thanks to Scottish independence, a new partnership of the isles.

The opening keynote address by Ms. Sturgeon at the SNP conference comes at the beginning of a pivotal week in her campaign for a second Scottish independence vote.

Tomorrow, the UK Supreme Court is set to begin debating whether Ms. Sturgeon’s Scottish Government has the authority to call another referendum without consent from Westminster.

According to experts, the First Minister is likely to lose the lawsuit, which would derail her efforts to secede.

Despite agreeing that the last election should be “once in a lifetime,” the SNP leader wants to conduct a poll on October 19 of the next year.

Despite surveys showing that Scots do not prioritize independence and a slim majority still favor the Union, SNP members have pushed for tangible progress on the issue.

Ministers and MPs reprimanded Ms. Sturgeon for her aggressive language yesterday after she hurled insults at the Conservatives in an interview and made hints about a potential electoral alliance with Sir Keir Starmer of the Labour Party.

The SNP leader stated that the decision between Sir Keir and Liz Truss for No. 10 is “not difficult to answer,” adding, “I despise the Tories and all they stand for.”

The remarks were denounced as a derogatory insult on the 25% of Scottish voters who supported the Conservatives in the most recent general election.

They increased worry that Labour and the SNP might form a coalition to win power in the event of a hung parliament.

Ms. Sturgeon acknowledged that the UK Supreme Court could reject her request for a second vote on independence this week.

When asked whether the referendum she favors on October 19 of next year “will” happen, Ms. Sturgeon deliberately only said she is “sure that can happen.”

She has said that the SNP would only campaign on the idea of leaving the UK if the Supreme Court dismisses the case.

A decision can take around two months.