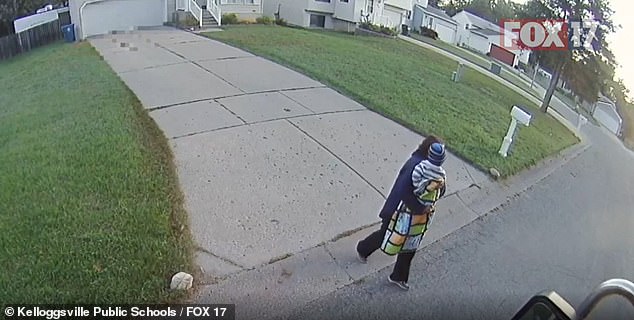 Two school bus drivers in Michigan who acted quickly to stop a carjacking saved the life of a 2-year-old child.

A bus driver rescues a child who had been abandoned on the side of the road by the suspect in an amazing scene that was captured on video.

The boy’s parents were waiting outside to put their second child on the bus when the carjacker broke into the vehicle only moments earlier while the toddler was still inside.

The parents were seen frantically waving in the Kentwood area by a passing school bus driver, who immediately called for assistance.

The boy was safely brought into his parents’ arms by another bus driver who had heard the plea for assistance and seen the child.

A little while later, in Grand Rapids, the stolen automobile was discovered. The carjacker has not yet been found by police.

In order to board the bus, the parents, according to FOX17, were standing outside of their moving automobile. The backseat was occupied by their 2-year-old child.

Unexpectedly, a man rushed to the vehicle, climbed in, and took off. Their little child remained in the car.

Dave Skinner, the driver of the Kelloggsville school bus, saw the parents frantically waving and he stopped to assist them.

According to Skinner’s statement to FOX 17, “I was traveling down 48th Street for my morning pickup.” Looking down the road, I saw several folks down by the side of the road waving their arms.

Sue Figueroa, a school bus driver, believed she had only seen the youngster, but after hearing the radio cry for aid, she took the child from a driveway.

Skinner called 911 and broadcast a message on the bus radio asking other motorists to keep an eye out for the youngster.

When you come near enough, you can see the expression in your parents’ eyes, and you know something is amiss, according to Skinner. “I stopped because it’s sort of a judgment call.”

Sue Figueroa, another school bus driver, received the call and drove her bus around to assist thinking she had just discovered the child.

Skinner said that the woman had observed a youngster holding a blanket while standing by the side of the road in the direction she had come from. I’m still resolving issues with my parents. Kristen then orders her to turn around and go back and pick up the child over the radio.

Another employee, Kristen Nickelson, had radioed Figueroa with the information while she was in the office.

When Figueroa saw the little child sitting on a driveway at Garland Street and Jefferson Avenue, she turned her bus around and went back there.

The youngster is picked up by her as soon as she gets off the bus, and a video captures the whole event.

A little while later, in Grand Rapids, the stolen automobile was discovered. There is no sign of the carjacker. FOX17 was informed by investigators that the carjacking seemed random.