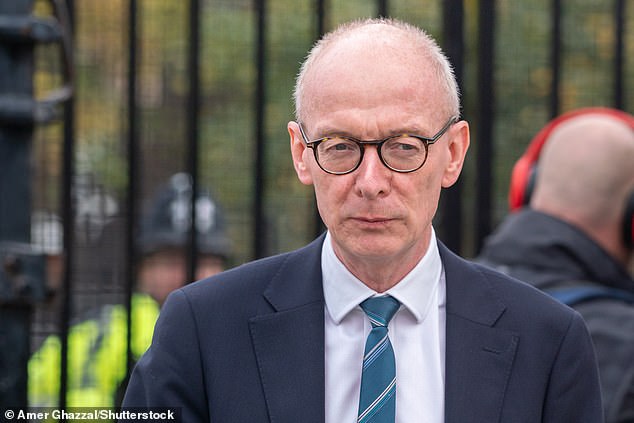 Yesterday, Labour was accused of dirty methods and waging a smear campaign against Rishi Sunak and his wife by advocating for the abolition of non-dom tax status.

On his first day as Prime Minister, Pat McFadden, the Shadow Chief Secretary to the Treasury, wrote to Mr. Sunak stating that eliminating the status may generate billions of pounds.

In response, Tory MPs accused Labour of attempting to target Mr. Sunak and his wife because of their riches.

In April, it was revealed that Mr. Sunak’s multimillionaire wife, Akshata Murthy, was not a citizen of the United Kingdom.

It allowed her to escape UK taxes on her international earnings in exchange for a £30,000 annual fee. The agreement is completely legal.

When questioned by the Daily Mail, Mr. McFadden denied coordinating a smear campaign, stating, “It’s not a policy about one person.” Asked again if Labour was ‘deliberately targeting’ the new prime minister and his wife, he responded, ‘You could raise billions of pounds in [abolishing non-dom status] and at a time when we are told that next week’s budgetary event would require difficult decisions.

However, this is an other decision he may make [to raise funds].

According to Labour, abolition of the tax status might generate up to $3 billion. The former shadow chancellor Anneliese Dodds also launched an attack.

She told Sky News, ‘We’ve been very clear that we intend to close the tax loopholes that allow non-doms to pay significantly less tax than those who live here and pay taxes in the conventional manner. This would allow us to pay for more nurses and physicians in the NHS.’

Sir Iain Duncan Smith, former leader of the Conservative Party, retorted, “This is nothing but smear tactics and dirty tricks from the Labour Party.”

It is juvenile, pitiful, and reduces politics to personalities, despite their professed superiority. Referring to a tweet by Labour MP Nadia Whittome, in which she stated that Mr. Sunak’s victory was not “a gain for Asian representation” due to his riches, Sir Iain added, “I appreciate that some Labour MPs were bordering on racism, but what are they doing about it?

“It is completely disgusting and revolting…

Labour must immediately put its own house in order.

Monday night, following a request from the Labour headquarters, Miss Whittome removed the post from her blog.

However, it stayed online for several hours, and yesterday she was still a Labour MP.

Andrew Bridgen, an MP for the Conservative Party, stated, “Labour are just envious because we’re the first party to have a non-white prime minister and Labour has never even had a female leader.”

It occurred while party leader Sir Keir Starmer briefed his Shadow Cabinet on the lines of attack they should employ against the Prime Minister, including portraying Mr. Sunak as a “strange guy.” In contrast, Labour will portray Sir Keir as a “moderate father.”

Labour’s plan would also involve portraying Mr. Sunak as “a weak prime leader who must prioritize his party over the nation.”

Sir Keir stated during the meeting, “[Mr. Sunak’s] first message yesterday was about the need to save the Conservative party, not the country.”

He also claimed that Mr. Sunak’stabbed Boris Johnson in the back’ by resigning as chancellor this summer, bringing Mr. Johnson’s premiership to a crashing halt, and he criticized the new prime minister for being ‘thrashed’ by Liz Truss in the previous Tory leadership contest.

They will also attempt to accuse the government of making working people pay for errors committed in the mini-budget presented last month, which exacerbated the public finance situation. Sir Keir made no mention of his multimillionaire status. During the controversy over Miss Murthy’s tax status earlier this year, her spokeswoman stated that she would begin paying UK taxes on international profits to alleviate political pressure on her then-Chancellor husband.

Mr. Sunak called the smear campaign against Miss Murthy, whose wealthy father is one of India’s wealthiest businesspeople, as “extremely disturbing” at the time.

According to Mr. McFadden’s letter, seen by the Mail, Mr. Sunak’s most pressing responsibility will be to reduce the country’s spiraling cost of living.

It said, “One issue that has come to light is ‘non-dom’ status and the notion that wealthy individuals can pick where to pay their taxes.”

The letter requested that the Prime Minister abolish non-dom status and ensure that he will not appoint any ministers who hold it.

»Labour is accused of defaming Rishi Sunak and his wife«