Skip to content
Go Home «» News «» Breaking News «» Julia Child helped me improve my food stamp dinners. I cooked in her kitchen, which was a dream 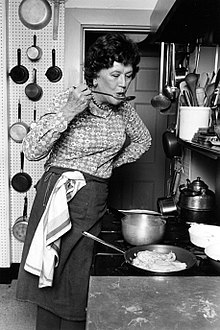 Early in my life, I lived in a trailer in the woods of north-central Arkansas on welfare.

My clothing and footwear originated from yard sales. My holiday gifts came from charitable angel trees. I purchased my items with food stamps. For the duration of the month, we subsisted on generic versions of packaged and canned processed foods. We supplemented our diet with food that my grandparents produced or foraged, as well as government-surplus pinto beans, rice, powdered milk, simple cereals, peanut butter, and yellow cheese blocks.

Whenever my single mother was able to find employment, especially during the summer, an old television served as my babysitter. Since PBS was the only channel we could reliably receive through our rabbit-ear antenna covered in aluminum foil, he became my father. The multicultural cast of “Sesame Street” became my community. Tom Baker became my odd uncle on “Doctor Who” In addition, Julia Child was my clumsy aunt.

Though I did not comprehend the distinction between sautéing and braising, browning and deglazing, Child’s movements, frequent narration, and peppering of her recipes with French terminology enthralled me.

I ultimately settled in France many years later.

On the weekends, I would rise at early and sneak into the woods or the dying garden to gather whatever I could. Back in the trailer, I would narrate my actions for a fictional TV audience using my best Child impression, slicing wild chives or sheep sorrel, shredding government cheese, and combining coffee creamer as a milk substitute — anything to elevate those cans of generic peas and corn. Child’s leadership instilled in me the notion that gourmet cuisine are available to everybody, wherever.

Over the next ten years, additional television shows, movies, and songs encouraged me to believe that I, too, could travel the world and that spending time in France could uplift me. I arrived in France in my twenties and, after a hard start, eventually got married. I am currently a French citizen who is raising our four children in Provence.

As soon as Makenna Held greeted me with a shot glass of freshly pressed local olive oil in her driveway at La Pitchoune, Child’s previous French residence, I knew she would be a friend. When she and her boyfriend, Chris Nylund, offered me to be a student in their Courageous Cooking School for a week that would be filmed for a television pilot, I recalled escaping the monotony of poverty by pretending to be Child in that meagre trailer kitchen.

The idea of an actual production crew shooting my week made my inner poor child uncomfortable.

I slept in the room of Child

Obviously, the encounter altered my life. I slept in the room once occupied by Child. I sipped rosé and nibbled on Provencal food in front of her expansive fireplace. I nibbled on mulberries from the tree on the stone-terrace and tiptoed across the same grass as Child.

However, the most amazing moments occurred in Child’s kitchen.

I couldn’t help but recall my trailer kitchen, where I used a serrated steak knife to chop everything, coffee mugs and kitchen spoons for measuring, and upside-down plates as lids. Even though the cooking equipment was different, the permission to explore culinary creativity and intuition awakened, affirmed, and finally calmed my inner self.

Prior to my arrival, I couldn’t help but compare myself to the other students, whom I assumed would be more sophisticated.

In contrast, as we stood shoulder to shoulder around a central chopping island, they not only welcomed me but also praised my tales of overcoming poverty.

Working in pairs and teams, we created bright, flavorful, and exhilaratingly risky food. While stirring and tasting sauces with beads of sweat on our foreheads, we forged unbreakable ties. As a selected family, we gathered at the conclusion of the week around a vine-covered terrace table to sample each other’s creations. We were so engrossed in our companionship that we were oblivious to the rush of cameras and microphones documenting our every move.

And I neglected to recognize my deficiencies.

»Julia Child helped me improve my food stamp dinners. I cooked in her kitchen, which was a dream«