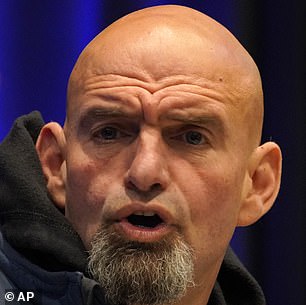 John Fetterman, a Democrat running for the Senate, received the all-clear five months after suffering a stroke from a Pennsylvania physician who also donated to his campaign.

Following his stroke on May 13, 53-year-old Fetterman’s health has come up in a heated debate with TV doctor Mehmet Oz, who claims his opponent is now unable to hold a position of power.

Dr. Clifford Chen, Fetterman’s physician, said on Wednesday that the man was doing well but was still having some problems with his “auditory processing.”

Later, it was discovered that Chen, who runs a clinic in the Pittsburgh suburb of Duquesne, had contributed to Fetterman’s campaign and several other Democrat organizations with more than 300, mostly modest, donations since 2015.

According to the campaign records, Chen contributed $500 to Fetterman’s fund, Fetterman For PA, in June 2021.

Additionally, he donated money to Democratic candidates including Val Demings in Florida and Raphael Warnock and Jon Ossoff in Georgia.

He provided at least $1,100 to the Democratic Senatorial Campaign Committee (DSCC), which received the majority of his donations.

Oz escalated his insults and questioned on Wednesday if Fetterman’s wife would have to take the seat in place of her husband when Chen intervened.

In order to react to interview questions, Fetterman has sometimes tripped over his words and required closed-captioning video equipment.

Chen said in his one-page letter that Fetterman’s recovery was proceeding well.

After testing him on Friday, he noted, “His speech was normal and he continues to display indications of an auditory processing issue which might come across as hearing trouble.”

Occasionally, he will “miss” words that seem to be missed hearing but are really improperly processed.

Fetterman showed no negative impacts on his “cognitive abilities,” he continued.

His vita signs were all listed as being normal in the document, which also said that he was healthy enough to work.

Overall, the report said that Lt. Governor Fetterman was healthy and had a strong dedication to maintaining sound exercise and health habits.

He is unrestricted in his job and is able to perform the duties of a public position in full.

According to Fetterman, the situation had prompted Pennsylvanians to share their own accounts of health issues, which had further strengthened his resolve to assist them.

And he responded by striking his foe.

I’m ready to serve and continue to grow better every single day, which is unfortunate for Dr. Oz, he remarked.

The two contestants are fighting for the vacant Senate seat in Pennsylvania in a contentious election that has seen numerous insults exchanged.

According to the rolling average of the surveys from FiveThirtyEight, the Democrat leads his opponent by five points.

Oz has constantly accused his opponent of lying about his health, turning it into a hammer in their argument.

“It’s not about me or him,” he said. He said on the Hugh Hewitt program that “this is about the voters.”

They have a right to know what is happening in his body so they can determine whether or not his wife is correct. Does he or she plan to hold the position of senator?

He keeps avoiding these subjects, I say.

On Monday, the White House defended Fetterman and claimed that he had the full backing of President Joe Biden.

Speaking specifically about the president’s one-on-one meeting with Lieutenant Governor Fetterman, White House Press Secretary Karine Jean-Pierre said that the leader considered the lieutenant governor to be “an amazing personality, and just as competent… as always, who is carrying out his duty.”

On Thursday, Biden is scheduled to go to Philadelphia to raise money for Fetterman.