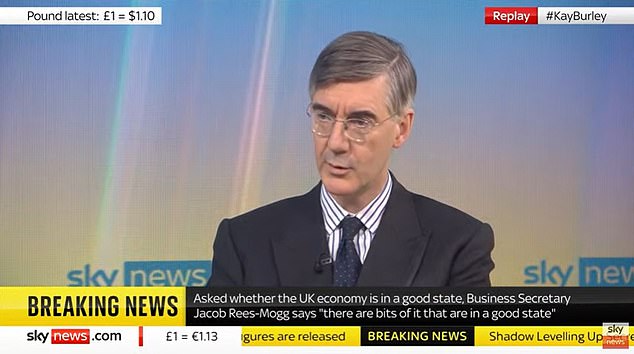 As ministers presented measures to curb power company profits today, Jacob Rees-Mogg refuted claims that they had reversed course on a windfall tax on energy titans.

The sector said that the government’s proposed temporary income cap on low-carbon power providers amounted to a “de facto” levy on nuclear and wind energy companies.

The “Cost-Plus-Revenue Limit” is a component of a larger energy assistance program unveiled by Prime Minister Liz Truss last month, which also includes a ceiling on the cost of monthly energy bills for the typical home.

The Energy Prices Bill was tabled in parliament yesterday night and grants the government unprecedented emergency powers to implement the measures.

Ms. Truss has been steadfast in her refusal to impose a new tax on energy producers, despite strong public support and Labour’s calls for action at a time when households are having trouble paying their bills.

No one in their right mind, according to Mr. Rees-Mogg, the business secretary, would refer to it as a windfall tax.

The goal of the market intervention is to keep the price of gas from rising and impacting the cost of electricity. The market players are affected by this.

“So, this would have harmed the renewable producers anyhow if we had capped the wholesale price of gas rather than the retail price of gas.”

Following Russia’s invasion of Ukraine, gas prices have skyrocketed across Europe and Great Britain, which has in turn raised the price of power.

The legislation would apply to low-carbon producers who sell their power at such skyrocketing rates but do not need to purchase pricey fuel because gas normally sets the price of electricity.

The Department for Business, Energy and Industrial Strategy (BEIS) stated that “low-carbon electricity generators are therefore benefiting from abnormally high prices, while consumers are having to pay significantly more for energy generated from renewables and nuclear, even though they often cost less to produce.”

Earlier this year, MPs gave their approval to a 25% windfall tax on British North Sea oil and gas firms.

The government said that it will work to sever the connection between high gas prices and the revenue generated by electrical companies without providing many specifics.

According to the government, the cost of gas determines the cost of power. Therefore, when gas prices rose over the last year, many of Britain’s wind farms and solar farms received significantly higher payments than usual for their output, despite the fact that their expenses had hardly changed.

According to the Department for Business, Energy, and Industrial Strategy, “the particular mechanics of the interim cost-plus revenue ceiling will be subject to a consultation that will be released soon.”

The opposition climate change secretary, Ed Miliband, criticized the government’s “incompetence” by asserting that Labour had “driven the agenda” on the matter.

People are confused for good reason because our government lurches from crisis to crisis like a drunken sailor, and they’re doing it again today. Our government is an unusual blend of orthodoxy and ineptitude.

The trouble with bad government, and we do have terrible government, he said, is that they don’t only make errors; they also do the wrong thing. And even when they act morally, they don’t do it in a proper manner.

Wind and solar farms in the UK are already paying back some of their extra revenues.

When prices are high, wind farms and other power produced under the Contracts for Different program—which was introduced more than five years ago—return money to consumers.

Plans for older wind and solar farms to transition to these types of contracts have also received support from the government and business.

It happens a few weeks after the government imposed a cap that keeps home energy costs at a maximum of 10.3p for gas and 34p for electricity.

Leaders in the energy industry demanded additional information from the government after some argued that the ceiling should be set at a level that won’t scare away investors.

According to the Department for Business, Energy and Industrial Strategy (BEIS), “Low-carbon electricity generators are benefiting from abnormally high prices, while consumers are having to pay significantly more for energy generated from renewables and nuclear, even though they often cost less to produce.”

The proposed limit is being welcomed by Energy UK, according to Dhara Vyas, director of advocacy, who called it “much-needed help” for millions of families and companies.

But we need to make sure the system doesn’t jeopardize the investment the UK needs to guarantee long-term, sustainable economic development, she said.

The decision, according to Dan McGrail, chief executive of RenewableUK, might “skew investment towards the fossil fuels that have precipitated this energy crisis.”

We worry that a price restriction may mislead UK investors in renewable energy, the official said.

Mr. McGrail also cautioned the government to make sure any limit has a defined end point, is technology neutral, and is set at a level that still makes the UK more appealing to investors than the EU.

We are really concerned about the claim that renewable energy producers are reaping enormous profits when our electricity has already been supplied to consumers at rates that are hundreds of millions of pounds below current costs at significantly lower pre-war pricing, according to Mr. Anderson.

It’s frustrating that the government’s substantial market involvement has arrived with such little information; all this does is increase uncertainty.

“Gas prices are to blame for this issue, so it’s odd that the suggested remedy is to restrict the cost of low-carbon electricity production while leaving the gas industry unaffected.”