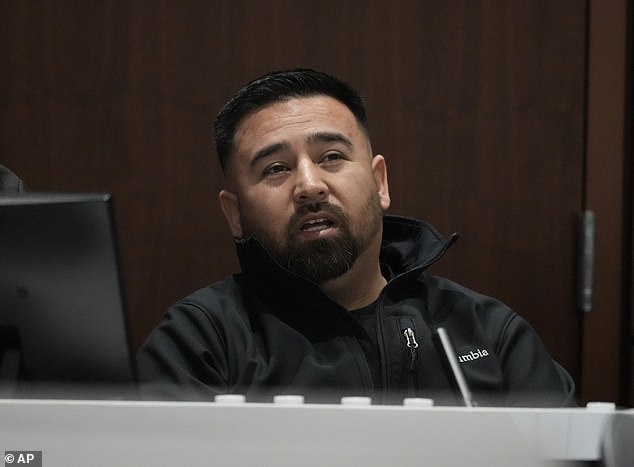 During his second expulsion from the courtroom during his murder trial, Waukesha parade murderer Darrel Brooks was punished for interfering with the cross-examination of his own defense witness, who was propelled up to 20 feet into the air by his SUV.

In his tumultuous murder trial, Brooks, 41, is acting for himself. He is accused of ramming his red SUV into a throng watching the Waukesha, Wisconsin, Christmas parade last year, killing six people and wounding 60 more. If found guilty, he would serve a life sentence.

The trial has been ruined by Brooks’ repeated disruptions, screams at the judge, and even one instance when he pulled off his shirt.

Tuesday, before being ejected from the courtroom in front of the jury, Brooks summoned Juan Marquez as a witness.

When Marquez was struck by Brooks’ SUV and flung approximately 20 feet in the air while participating in the procession with the Catholic Communities of Waukesha, he shattered his leg.

Marquez acknowledged under questioning that he did not see the car that hit him and was asked about his police testimony in which he claimed that the car was not the red one that Brooks was driving.

Brooks frequently accused Marquez of “judicial misconduct” throughout their cross-examination, and Waukesha County Circuit Judge Jennifer Dorow cautioned her to behave properly or she would be expelled.

For the duration of the cross-examination, he sat in a nearby room, although he was subsequently permitted to return when the prosecution summoned further witnesses.

The day following the parade, Brooks was interrogated by Detective Jay Carpenter, who also made an appearance in court to give the jury a five-part account of the suspect’s five-hour questioning.

The day following the parade incident, Carpenter testified to the jury that Brooks was evasive in his responses to inquiries, particularly those pertaining to the SUV he utilized.

At the time, Brooks said that he had been to Waukesha with an unnamed companion. He also declined to explain his decision to rush through the festive parade.

During his cross-examination, Carpenter informed Brooks, “I wasn’t sure whether you were the driver at first, but I did suspect you were connected.” Yes, there is information I hid from you.

Carpenter added, “Mr. Brooks was still reluctant to explain to us, give us the clarity…to grasp and know why he did it.”

The Waukesha, Wisconsin, annual parade was taking place when Brooks, a Milwaukee resident, allegedly purposefully drove his vehicle over police barriers and into the spectators. Waukesha is located approximately 15 miles west of downtown Milwaukee.

After reportedly confronting his fiancée outside of a hotel just before the parade, Brooks charged into the throng.

Then, according to the police, Brooks went back and smacked his girlfriend in the face before running her over with his SUV and left tire prints all over her body.

Although Brooks was expelled from the courthouse on Tuesday, it wasn’t the first time he had caused a disturbance there.

Brooks’ efforts to divert attention from the proceedings date back to pre-trial and jury selection, during which time he was repeatedly ejected from courtrooms, including once when he removed his shirt.

Prior to two weeks ago, Brooks’ constant outbursts caused opening comments and witness evidence to be postponed.

The suspect expressed regret to the court for his bizarre actions the previous week.

For the record, I simply want to say that I would want to formally apologize to the court for my behavior during the trial last week,’ Brooks said.

‘I just want the court to realize that it’s really emotional right now, not only for the entire issue of the trial, but also for the families here who have to deal with, you know, everything that’s going to be associated with the trial,’ she said. It’s quite emotional for my family and for myself as well.

But that’s not a justification for what I did, and I need to treat people with more respect. I did not grow up that way. I also owe an apologies to you, your honor, and the court.

»If found guilty, Darrel Brooks might serve life in prison«