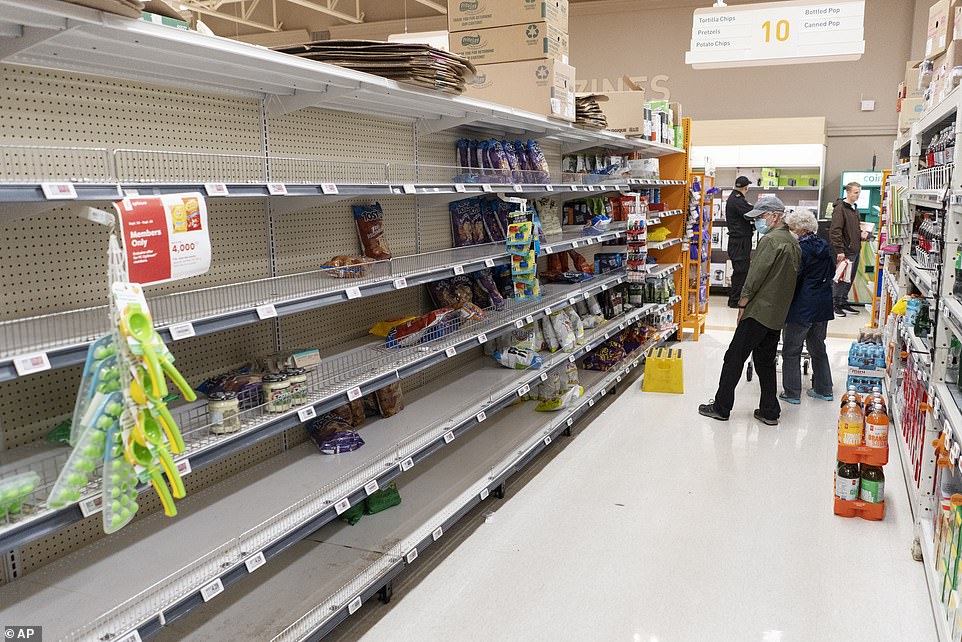 As Canadians stockpile food and prepare their houses with barricades, Hurricane Fiona, which has been downgraded to a Category 4 hurricane, is anticipated to hit Canada’s eastern coast early on Saturday.

It’s anticipated that the storm will make landfall in Nova Scotia in Canada and also have an impact on Prince Edward Island and Newfoundland.

It will bring 130 mph winds, nonstop rain, and a high probability of floods.

As Canadians prepare for a storm greater than any they’ve seen in 50 years, the Canadian Hurricane Center has projected that storm surges may be as deep as 6-8 feet and coastal waves as high as 40 feet in certain regions.

The Canadian government has issued a rain warning for parts of Fiona’s course, stating that “road washouts are probable.” They advise locals to stock their homes with enough goods to last 72 hours.

The storm surges will probably cause the greatest damage from the storm, according to meteorologist Rob Carroll, who added that “all the components are really there for really significant water levels, floods, and probable devastation.”

At 1 p.m. EST, the Canadian Hurricane Core reported that the storm’s centre was approximately 475 miles south of Halifax, the largest city in Nova Scotia, and that it was heading northeast.

the Canadian Hurricane Center’s Chris Fogarty told CNN Fiona has the potential to “set a new standard for tropical cyclone strength in Canada.”

According to John Lohr of the Emergency Management Office of Nova Scotia, there may be widespread power disruptions in Nova Scotia as there have already been in Puerto Rico as a result of the hurricane.

The province is expected to have effects. Every Nova Scotian should be getting ready right now, he said.

The utility firm Nova Scotia Electricity established an Emergency Operations Center that will serve as its operational hub as it works to swiftly restore power.

In order to keep food cold in the event of a power loss, Canadians have been stockpiling ice in the home. They have also been keeping additional batteries on hand.

The immediate protection of property requires action. Avoid the coast; the waves are quite hazardous. According to a Prince Edward Island emergency notice, residents in those areas should be prepared to evacuate if necessary.

Although meteorologists predict that Fiona may weaken somewhat before making landfall in Canada, they caution that this will not be a dramatic slowdown and that the storm should still be taken seriously.

According to Bob Robichaud, a meteorologist of the Canadian Hurricane Centre, “all that velocity is contained inside the storm, so it’s extremely difficult for anything like that to really wind down.”

He said, “It’s a massive storm, barely 900 kilometres from us, and it’s growing larger.”

The mayor of Cape Breton Regional Municipality, Amanda McDougall, remarked, “We have had these kinds of incidents previously, but I worry not to this level.”

Because the storms lose their primary source of energy as they enter cooler waters, hurricanes are not common in Canada.

Five people have already perished as a result of the storm: two in Puerto Rico, two in the Dominican Republic, and one in Guadeloupe, a French territory.

Then, when Fiona approached Bermuda, locals were spotted boarding up windows and seeking refuge ahead of the hurricane’s arrival.

Fiona made landfall on the island on Thursday as a Category 4 storm, and while being reduced, the hurricane is still moving toward Canada and poses a danger to the Caribbean islands.

Fiona devastated Puerto Rico before it reached Bermuda, prompting President Joe Biden to declare on Thursday that the whole federal government is prepared to assist the US territory in recovering.

We’re all in this together, Biden said at a meeting with Federal Emergency Management Agency officials in New York.

In Puerto Rico, where Hurricane Fiona triggered an island-wide outage, the president pointed out that hundreds of FEMA employees and other government workers had already arrived on the island.

Thankfully, the pace of power restoration is moving more quickly than it did when Hurricane Maria struck in 2017, when all 1.5 million houses were without electricity for a week.

It took 11 months for the now-bankrupt Puerto Rico Electric Electricity Authority to restore power to every consumer. The company in charge of the island’s electricity, LUMA Energy, warned that “complete restoration might take several days.”

Meanwhile, in the Dominican Republic, more than a million people were without access to running water, and as of Wednesday, less than 350,000 houses and businesses lacked electricity.

More than 600 houses have been damaged, according to Maj. Gen. Juan Méndez Garca, head of the DR’s emergency operations centre, who spoke to CNN. Some towns are now cut off from help.

The approval of a major disaster designation for the island was announced by President Biden on Wednesday. This would provide Puerto Ricans access to subsidies for short-term housing and house repairs as well as low-interest loans to cover property damages.

Puerto Rico Governor Pedro Pierluisi wrote, “This assures that our people will have access to further support from FEMA to recover from the harm inflicted by this tragedy.”

In addition to the president’s efforts, Eric Adams, the mayor of New York Municipal, has sent employees from city departments to Puerto Rico to assist with the damage assessment.