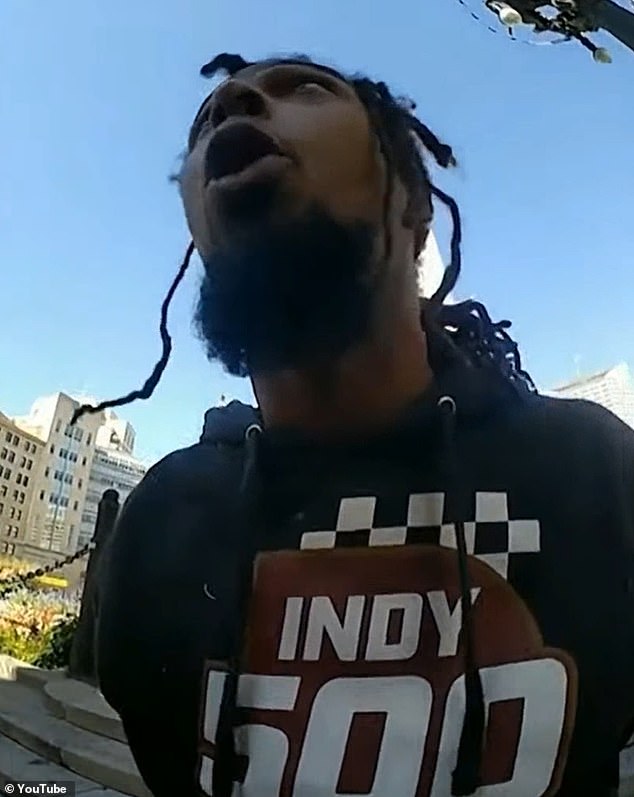 Federal charges are being brought against Indianapolis Metropolitan Police Sergeant Eric Huxley after bodycam evidence showed him stomping on a black man’s face.

A horrific bodycam video of an Indianapolis Metropolitan Police officer stamping on a suspect’s face while in handcuffs has led to federal charges being brought against him.

Jermaine Vaughn, 38, was already on the ground when Sergeant Eric Huxley approached and kicked him in the face.

Sgt. Huxley testified before a federal grand jury, which handed down an indictment accusing him of violating rights while acting in the course of the law.

Local authorities have already filed charges against Huxley for his conduct during the September 2021 arrest of Jermaine Vaughn.

In the incident’s body camera video, Vaughn is seen arguing with another officer before being knocked to the ground.

Vaughn, according to the officer, was being difficult. The guy is lying on the ground on his stomach, staring up at Officer Shores while holding his hands behind his back. Then Sgt. Huxley approaches him, raises his left leg, and slams his left foot into his face.

The probable cause affidavit against Huxley states, “Within seconds, blood is seen in his mouth.

You’re finished. You’ve finished. In the footage, an officer can be heard stating, “You’re done.”

Then, when his trousers came down, he was turned over onto his stomach and searched. His naked rear is blurred in the footage.

Huxley, a 14-year veteran, is now facing termination and criminal charges of violence and official misconduct due to the kick to the head and the body-worn camera footage that captured it.

The grand jury’s indictment claims that Sergeant Huxley struck the guy with his foot without having a valid reason to do so.

It also states that a hazardous weapon was used and that the crime caused physical harm.

We’re not going to do this, right?, one officer can be heard telling Vaughn during the takedown.

Another officer can be heard saying, “You’re done,” at least four times after Vaughn has been booted and is lying on the ground looking confused.

Before IMPD Chief Randal Taylor learned of the event, which was learned via IMPD’s typical Blue Team Use of Force reporting procedure, it had been over two weeks.

Throughout the local inquiry, Huxley was placed on paid leave.

This event should not have happened and was needless. Sergeant Huxley is not an anomaly, and I will not put up with this conduct from any member of the community.

As members of the law enforcement community, we must recognize that this conduct betrays the confidence of the public. According to Chief Taylor, “We are certain that the legal system will uphold justice for the guy and his family.

Taylor opened a news conference last Tuesday by saying, “Honestly, I’m here with a sad heart.” She then played the bodycam video.

This footage will offend you just as much as it did me, the 34-year police veteran added. There is no justification for it. Transparency is one of the things for which we have been working, according to Taylor, who explained why he published the bodycam video.

We did it because we wanted to establish the proper rapport with the community that we need.

Huxley’s employment with the police will also be ultimately decided by a merit board run by civilians.

In a related federal action, the city, the police force, and the police chief are also defendants.

According to the lawsuit, two of the policemen who exposed Huxley for his alleged misdeeds suffered reprisals.

Acting U.S. Attorney John Childress said that the FBI investigation has started and that his office is aware of the occurrence.

“The Department will take necessary action if the inquiry shows prosecutable breaches of any federal criminal laws,” said Childress in a statement.

According to Ryan Mears of the Marion County Prosecutor’s Office, “the footage in this event speaks for itself.” “In a situation like this, I believe it’s quite beneficial because it portrays the circumstances, what lead to the contact between the two people, and you can actually sort of witness the events as they proceed in real-time,” the author says.

Officer Matthew Shores and Sgt. Christopher Kibbey, the other two responding officers, have been put on administrative duty pending the conclusion of the inquiry.