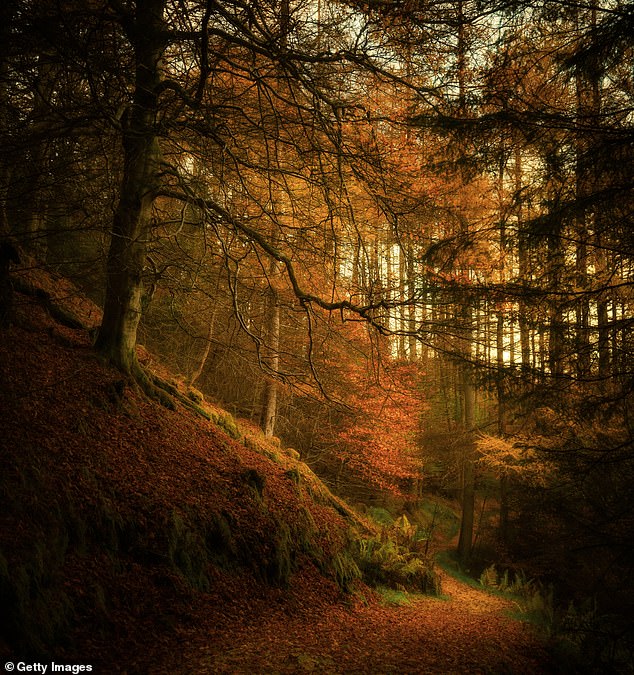 Every season has a signature setting. Who doesn’t want to be by the sea in the summer or atop a mountain in the crisp spring air? When it comes to winter, there is no better place to be than a city, where the dazzling lights of the major city will shine off the wet pavement.

But in the fall, thoughts naturally turn to the countryside: to the British forests, orchards, and lanes, where the trees and shrubs swell with fruit and the fertile ground bursts with mushrooms.

Seasonal bird song may be heard there. The fieldfare heralds the arrival of fall in much the same way as the cuckoo does for spring.

This week, when I was walking through a wood in Herefordshire, I could hear the loud chacking of these colorful thrush family members as they ate windfall pears in a hillside orchard.

And I saw the splendor of autumn starting, with the trees’ leaves “on the turn.”

Is there any work of human art that can match the beauty of the countryside in the fall? When the wood flickers with all the fiery reds and the hedges along the paths glisten in gold.

A copper-colored oak leaf had transformed into copper, and enough leaves had fallen and started to decay to provide the incense-like aroma that is distinctive to autumn.

A cock pheasant navigated the leafy carpet like an exacting bishop leading a procession while a veil of mist lingered low around the trees.

The statuesque oak trees’ dropped acorns burst and crackled beneath my boots as I walked, and the sky above was that pure, chilly blue you get at this time of year.

This feeling of plenty is not only present in the woodlands around me. Trees moan with fruit all throughout the nation, horse chestnut conkers cover the ground, and gardeners report an abundance of everything from plums to walnuts.

This extraordinary abundance may be linked to the bizarre weather this year, which included a rainy spring and scorching summer temperatures.

Trees and shrubs suffering from the drought concentrate all of their energy into developing more seeds in order to start a new generation.

The oaks in my neighborhood wood have been extremely diligent. A large crop of acorns has indeed been produced in what is known as a “mast year,” which happens every three to five years.

Other British trees, most notably the beech, have mast years. Nature is erratic, however, and despite tales of beech mast across the UK and Ireland, the Herefordshire beech tree I consider to be mine — one may develop a weird affection for some trees — has only given birth to a few husks, and even these had shriveled kernels.

On a calm autumn day as the sun was setting, I saw a jay taking advantage of the abundance of acorns. To add to its stockpile, it flew down, filled its beak, and then went off while flashing its white rump.

The bird is able to endure the harsh winter months because to a hidden larder that it has excavated into the forest floor or pecked out of the end of a dead branch.

In another area, a grey squirrel was enjoying the abundance of nature while perched on its hind legs and gnawing ferociously.

An autumnal agricultural custom called “pannage” allows me to let my pigs into the wood at this time of year so they may stuff their snouts with acorns.

It formerly made it possible for the porcine economy to survive. According to historical court documents, my mother’s family owned pannage rights in the Golden Valley of Herefordshire until the 1600s. At the time, this was a topic that was worth fighting for.

But fewer and fewer of us now follow the ancient customs, and today, pannage is a custom that is still mostly practiced in the New Forest.

The anticipation of winter’s pleasure without the real drudgery of melting snow or February’s relentless rain brings exhilaration to autumn’s frost.

And it is the sloes, the plum-like fruit of blackthorn and a key component of the traditional British Christmas drink, sloe gin, that are sweetened by the frosty white kiss.

Because at this time of year, humans act very much like animals and birds. We humans keep ourselves busy creating bramble jam and apple chutney, as well as harvesting chestnuts to burn over an open fire, just as the jay builds its pantry and the squirrel puts on weight by feeding on acorns.

It all comes down to stockpiling supplies to get you through the winter. If you can beat the squirrels to them, plucking hazelnuts from the hedge as our Stone Age predecessors did has a lovely primordial feel to it.

In fact, Britain relied on foraging for autumnal wild foods until the 1950s. The Ministry of Food even created a leaflet called “Hedgerow Harvest” during World War II when U-boat activity threatened the country’s naval supply lines and sent non-combatants to gather nuts and berries.

They were on to something, the guys from the Ministry. The rosehip, the crimson fruit of the dog rose Rosa canina, was one of their favorite selections from the fall harvest. Don’t worry if the price of supermarket “superfoods” from far-off jungles worries you in these inflationary times.

The açai fruit from the Amazon only has 9.1mg of vitamin C per 100g, compared to the rosehip’s 426mg.

Below the tree line, the dog rose is found all throughout Britain, and this year’s hips are the biggest I can remember. They dangle enticingly like rubies in the bushes beside the path.

The hawthorn trees were also covered with fruit, and the sight of their blood-red berries made one think of the fabled Scots proverb “Mony haws, mony snaws”—many haws, many snows.

Another harbinger in legend of an impending harsh winter was an ancient rowan tree that remained standing despite the wind and years. It was covered with crimson berries.

The sour aroma of wild crab apples made my stroll even delightful as I selected enough to prepare a crab apple jelly. What a pleasure it is to forage rather than struggle with a cart along the store aisles.

What is not to admire about autumn’s generosity—free food and drink? Moreover, it didn’t end with the rosehip. The holy grail of mushroom hunters, the cep mushroom, popularly known to chefs as “porcini,” was down in the bronze leaf litter of the woodland floor.

As reliable a harbinger of fall as the fieldfare’s arrival is the Boletus edulis’ break through the forest floor.

I removed 10 of the ceps that had been aided in their development by the damp mist while leaving a comparable number remaining as a tribute to nature.

While ceps may top the menu, 20 other edible mushrooms appear in the fall, which is fungus season on these isles. Ceps are enjoyed by invertebrates and rodents alike.

As the night descended, it had already turned to owl-light.

This weekend, an Orionid meteor shower will light up the night sky with diamond-like stars and comets streaking across it.

A fallow deer buck’s barking could be heard through the chilly air as I turned to go home. Then there was a bone on bone thud. The antlers of two bucks were locked. The season of rutting and mating is autumn.

»Does human art rival autumn in the countryside?«