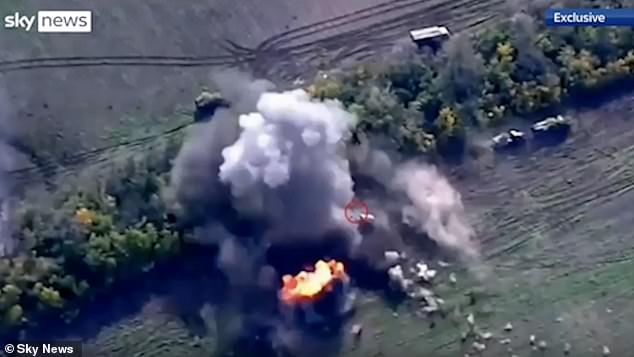 First-time use of British rocket launchers against Vladimir Putin’s army has been seen, aiding Ukraine in turning the tide against Russia.

Six M270 Multiple-Launch Rocket Systems (MLRS) were sent by Britain to Kiev to support Ukrainian forces in their conflict with Moscow’s occupying forces.

The current military momentum in Kiev, which has seen Russia lose control over broad swaths of Ukraine, is attributed with being made possible by long-range missile weapons like MLRS or High Mobility Artillery Rocket Systems (HIMARS).

Such weapons have been used to launch distant attacks on military installations, ammo storage facilities, and rows of armored vehicles, hampering Moscow’s capacity to adequately arm its forces and march any farther west.

When Sky News requested permission to film the MLRS in operation, an artillery unit commander said, “We’ve carried out incredibly high priority missions” as a result of these weapons.

The presenter was able to film missiles being fired from the MLRS and seeing them fly into the air. According to the Ukrainian artillery commander, the objective was a mobile Russian command station.

He told Sky News that he thinks British and German-made rocket launchers are responsible for around 30% of Ukraine’s success in its ongoing massive counteroffensive in the country’s east.

He told the broadcaster that this was one of the important causes that led the Russian army to escape rather than merely withdraw. Kyiv’s military have astonished many in recent weeks with their quick march through the Kharkiv Region and into the Donbas, reclaiming land that Russia had unlawfully taken.

The commander acknowledged that he and his troops had received training in the UK on how to handle the MLRS and praised those who had done so since the weapon was “very powerful.”

He said that they began carrying out operations three days after arriving in Ukraine.

For security reasons, Sky News did not provide the identities or whereabouts of the artillery unit, just that they had been carrying out “fire operations” as part of Ukraine’s push against Lyman, which Kyiv has since recaptured.

The MLRS was characterized by the broadcaster as a big, green vehicle with tracked wheels that resembled a pick-up truck. Its inside resembled a mobile home, where the troops had been living for the last month and a half, eating and sleeping continuously.

It was camouflaged to blend in with a tree line.

Due to Ukraine’s small quantity of these extremely efficient military systems, Russian assaults favor them as prime targets.

The British MLRS can fire precision-guided missiles with a range of more than 50 miles. Because of this, they are very precise and minimize collateral damage.

Russian artillery forces, many of which still use technology from the Soviet period, launch missiles that blast targets with a volley of rockets. This utilizes a lot more ammo, results in greater destruction, and kills more civilians.

Reporters from Sky News were present during an operation. Upon receiving a command, the artillery team immediately went to work and moved the MLRS to the designated location.

After locking on their target, the commander yelled “fire” in English, and the team once again scurried to get the MLRS back under cover before any Russian soldiers discovered their location and launched a counterattack.

The term “shot and scoot” has been given to this strategy by American operators.

Drone footage captured the attack on the objective, a collection of Russian military vehicles. Some of the Russian sites looked to have been struck directly by the missiles. The group’s other cars scurried to avoid the terrible explosions.

On June 7, the UK’s defense secretary said that the country will provide three MLRS to Ukraine. Later, the number was raised to six. On July 15, the day of Kyiv’s response, Ukraine said that it had received the first of the MLRS.

The United States has delivered HIMARS to Ukraine, following an earlier hesitation to do so – arguing such long-range weapons may attack targets within Russia and risk an escalation in the conflict.

Russia has been driven back by Kyiv’s soldiers by 12 kilometres in the southern part of the country. Other spectacular video has shown the furious assault speed that has forced Putin’s forces to escape for their safety.

According to today’s statement from the British Ministry of Defense, Ukraine’s assault in Kherson, which has been dragging on for more than two months, reached a “new phase” on October 2 when its troops advanced 12 kilometers along the Inhulets and Dnipro rivers.

British military intelligence summarized three days of fierce fighting in Kherson by saying: “Ukrainian soldiers have advanced the front line by up to 20 kilometres” (12 miles).

Although the Ministry of Defence said that Ukraine does not yet “threaten the key Russian defensive lines,” it noted that Russian soldiers “have frequently broken contact and withdrew” rather than stand and fight.

The MoD states that the choice facing Putin’s commanders is whether to remain on the west bank of the Dnipro and defend it as Putin is said to have commanded, or to cross the river and take up positions on the other side.

Up to 15,000 Russian forces may be present on the western side of the Dnipro, where Ukraine is advancing, and they have no simple means to cross the river now that Kyiv’s army have destroyed the key bridges.

The MoD said, “Russia has dedicated the bulk of its gravely undermanned airborne troops, the VDV, to the defense of Kherson.”

“To stabilize the front, Russia possesses a limited number of extra, highly capable soldiers that can be sent quickly.”

It most certainly intends to send mobilized reservists to this industry.

Relying on armaments from the West, Ukraine has pushed further into seized territories after last month’s victories in the northeastern Kharkiv region, forcing Russian forces to leave the city of Lyman, a crucial logistics center.

Additionally, the Ukrainian army launched a massive counteroffensive in the south, seizing a number of settlements on the western bank of the Dnieper River and moving closer to Kherson.

Following constant attacks on the two major Dnieper crossings that rendered them useless and caused Russian soldiers on the western side of the Dnieper to only depend on pontoon bridges, which have also been regularly attacked by the Ukrainians, the Ukrainians achieved advances in the Kherson area.

More Russian missteps in Kherson, according to Phillips P. O’Brien, professor of strategic studies at the University of St. Andrews, who noted that it’s “impossible to sustain a line” when your resources are strained, your men are worn out, and your adversary is far sharper.

Russian troops are trapped by a wide river and are facing a looming defeat that could pave the way for an eventual Ukrainian push to retake the Crimean Peninsula, which Moscow annexed in 2014.

Military bloggers and reporters who were stationed with Russian troops in Ukraine have painted a bleak picture of an inadequately resourced force led by inexperienced officers.

The dismal attitude of many Russian battalions contrasts strongly with the highly driven Ukrainian soldiers.

The Russian army has struggled with bad intelligence, in contrast to the Ukrainian military, which has used information given by the US and its NATO partners to choose and attack targets.

When Russian intelligence identifies a Ukrainian target, the military begins a protracted procedure to get authorization to attack it, which often lasts until the target vanishes.

Russian combat journalists in particular lamented the lack of drones and pointed out that Iranian-supplied drones had not been utilized to their full potential because of the poor target selection.

In response to the Ukrainian counteroffensive, Russian President Vladimir Putin issued an order for a partial military mobilization that intends to gather at least 300,000 reservists to bolster troops along the 1,000-kilometer front line in Ukraine.

In order to assemble a 1 million-member force, Ukraine announced a broad mobilization at the outset of the invasion. Up until that point, Russia had attempted to end the war with a decreasing number of volunteer troops.

Up to 200,000 invaders were estimated by the U.S., while some estimates from the West placed the number of Russian losses as high as 80,000 killed, wounded, and taken prisoner.

While the hawkish circles in Moscow applauded the mobilization as long overdue, thousands of Russian men left the country to escape being enlisted, and nationwide demonstrations erupted, posing fresh problems for the Kremlin.

New recruits uploaded pictures of themselves being forced to sleep on the ground or even outside.

Some said they were given rusted guns and instructed to purchase their own first aid kits and other necessities. Putin sacked a deputy defense minister in charge of military logistics as a covert acknowledgment of supply issues.

There is no easy cure for Russia’s military problems with the mobilization. The new recruits won’t be trained and organized into battle-ready groups for many months.

Putin then raised the stakes by quickly annexing the parts of Ukraine that were under occupation and declaring his willingness to defend them with “all measures available,” a direct allusion to Russia’s nuclear weapons.

Ramzan Kadyrov, the Kremlin-backed regional leader of Chechnya, has harshly chastised the senior military commanders, accusing them of ineptitude and nepotism, in an unusual hint of infighting in the upper levels of the administration.

Kadyrov ascribed Col. Gen. Alexander Lapin’s forces’ withdrawal from Lyman on Lapin’s failure to provide them with food and reinforcements.

He said the general should be demoted and sent to the front lines as a soldier in order to “wipe off his guilt with his blood.”

In a scathing assault that fed rumors that the Chechen leader had formed an alliance with other hardline Russian elites against the senior military leadership, Kadyrov also openly accused Gen. Valery Gerasimov of covering up Lapin’s mistakes.

In a direct declaration, Kadyrov also encouraged the Kremlin to take into account deploying low-yield nuclear bombs against Ukraine in order to change the direction of the conflict. This appeal seemed to mirror the idea’s rising popularity among Kremlin hawks.

To honor Kadyrov’s birthday, Putin elevated him to colonel general, a decision that is sure to infuriate the top brass.

While Dmitry Peskov, a spokesperson for the Kremlin, criticized Kadyrov for making an excessively emotional remark, he still lauded the Chechen leader for his participation in the battle and the bravery of his soldiers.

Yevgeny Prigozhin, a wealthy businessman known as “Putin’s chef,” attacked the governor of St. Petersburg, alleging that doing nothing to help Prigozhin’s Wagner private security firm amounted to aiding Ukraine in another example of the growing discontent at the top.

Kadyrov and Prigozhin, who have acted as frontmen for the hawkish circles in Moscow more and more, received swift backing from several other members of the Russian elite.

Retired The failure of the Russians in Lyman, according to Lt. Gen. Andrei Gurulev, a prominent member of the lower house of the Russian parliament, was caused by the upper brass’ determination to only provide Putin positive news.

He said that there was a “issue of absolute falsehoods and favorable reporting from top to bottom.”

»First use of British MLRS in Ukraine«