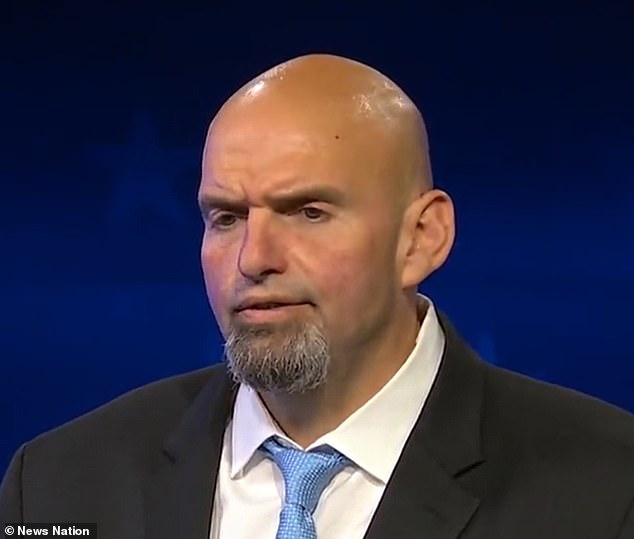 During their Tuesday night discussion, both John Fetterman and Dr. Mehmet Oz committed to back their party’s older frontrunners for the presidential nomination.

Fetterman, who struggled to complete his hour-long debate while suffering from a stroke in May, stated that he will support President Joe Biden in 2024… if he runs.

The lieutenant governor of Pennsylvania stated, ‘His decision to run is entirely up to him, and if he chooses to run, I would unquestionably support him. But ultimately, that is his decision alone.’

Biden has occasionally campaigned with Fetterman in the closely contested race that might determine control of the United States Senate.

Oz, the former TV doctor, was asked about Trump’s apparent reluctance to endorse the former president in 2024 in light of Trump’s endorsement of Oz in the primary.

The Republican clarified, “If Donald Trump decided to run for president, I would support him.” But this goes beyond a single candidate. This is a much larger story about how we will construct a larger tent so that more Americans may feel secure.

One of the debate moderators then asked him if he was concerned about the investigations into President Trump’s suspected attempts to undermine the 2020 election results.

Oz did not provide a definitive response: “I haven’t followed them very closely because I’ve been campaigning so fiercely!” They will resolve themselves. I have a great deal of faith in the American legal system, and I feel that law and order will prevail.

Fetterman struggled at times during his one-hour discussion with Republican Dr. Mehmet Oz, as the consequences of his stroke in May were evident.

The candidates immediately went after one other, with Fetterman’s delivery frequently halting and choppy, while Oz used the 13 years of TV experience he had to bash Fetterman for being ‘extreme.’

Due to his auditory processing disorder, Fetterman’s campaign warned that there would be ‘awkward pauses,’ ‘delays,’ and ‘errors’ during the lone Pennsylvania Senate debate.

Throughout the debate, there were pauses and stumbling.

At one point, moderators asked Fetterman to clarify his opinion on fracking, citing a 2018 interview in which he indicated broad opposition to the process, but not a ban.

Both candidates began the discussion on an offensive note.

Fetterman said of Oz, “I’m running to serve Pennsylvania, and he’s running to utilize Pennsylvania.” Here is a man who spent over $20 million of his own money attempting to purchase the seat.

Fetterman reportedly referred to Oz as a “fraud” and criticized the television doctor for owning 10 homes, arguing that he could not comprehend the problems of common Pennsylvanians. Fetterman criticized Oz for having things bearing his name manufactured in China.

The TV doctor continued, “During this crime wave, John Fetterman has been attempting to free as many guilty and life-sentenced killers as possible.”

It was helping students purchase their own houses 17 years ago. They failed to pay their expenses… It has never been a concern in any previous campaign. It was all about non-profit,’ replied Fetterman in response to the accusation.

Reports of tax liens against Fetterman and the community organization he managed, Braddock Redux, appeared in the local Pittsburgh news when he ran for the Senate in 2016, and were related to properties he and the group acquired in the steel town suburb where he served as mayor.

Before the debate, a Fetterman campaign letter criticized the Oz campaign for its assaults on Fetterman’s health, which were primarily made by Oz’s campaign staff.

The letter stated, “Oz will attempt to play the kind doctor on Tuesday night, but his campaign’s attacks on John’s health have been repeatedly mean-spirited and vicious.” We will not forget that this is the same “doctor” whose campaign insulted John’s usage of closed-captioning technology, his need for bathroom breaks and medical assistance around, and his claim that he wouldn’t have suffered a stroke if he had eaten more veggies.

Oz’s staff made the remarks as a September debate was being negotiated; however, the debate was never held because Fetterman withdrew out, claiming the Republican team was insulting a stroke victim.

Voters in Pennsylvania have already received their mail-in ballots, so the only time the two candidates will meet is on the Harrisburg stage.

Polls have routinely given Fetterman a slight edge, which remains despite the fact that several recent polls indicate a close race.

According to the survey, 51 percent of probable Pennsylvania voters support Fetterman, while 49 percent support Oz.

The Democratic populist’s advantage is within the margin of error of 4.4%.

The CBS News poll indicates that Pennsylvania voters are eager to watch how the matchup will play out.

Over sixty percent of respondents said that they were at least’somewhat’ interested in tuning in.

The survey was conducted from October 21 to October 24, up until the night before the discussion.

In addition to his auditory processing issue, the stroke has caused Fetterman to occasionally stutter and take longer pauses when speaking.

According to the poll, however, voters do not wish to hear about it tonight.

Nor are they interested in more attacks on Oz’s residence in Pennsylvania as opposed to his family home in New Jersey, which had been a pillar of Fetterman’s campaign.

54% of registered voters told CBS they are not interested in hearing about Fetterman’s health.

Similarly, 57% of respondents claimed they do not need to know where Oz lives.

However, more than nine out of ten Pennsylvanians questioned want the candidates to discuss the economy and their stances on crime and policing.

That could give Oz an advantage tonight – Concerns about the economy and rising inflation have been a major campaign theme for Republicans across the nation, as accumulating public opinion polls indicate that voters trust Republicans slightly more than Democrats on both the economy and crime.