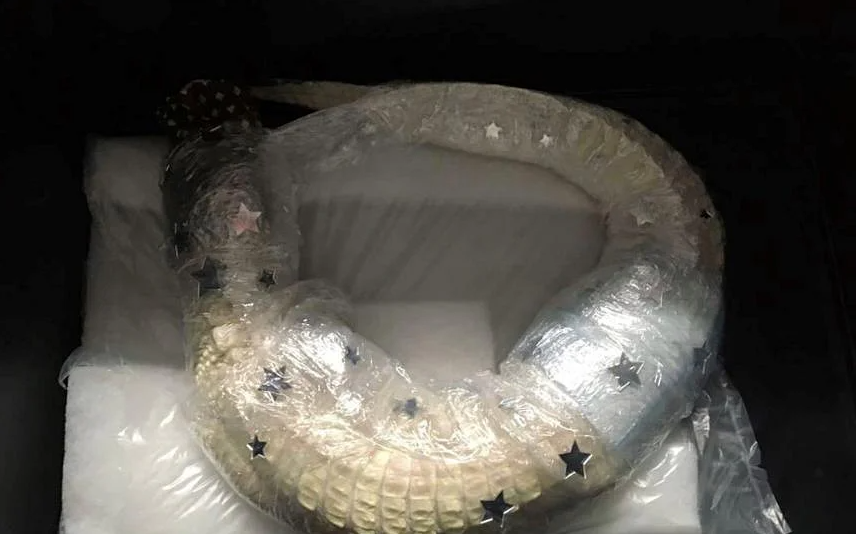 German media said that customs officials discovered a rare albino alligator in the suitcase of an American man at Munich Airport last month.

The incident was disclosed on October 14 by the customs office in Munich, which stated that the three-foot-long alligator is currently healthy and being cared for, as reported by the Süddeutsche Zeitung in Munich.

The alligator was discovered by airport personnel after the suitcase was X-rayed, according to Süddeutsche Zeitung. The animal was set free by customs officials and a veterinarian, as reported by the outlet.

The alligator was wrapped in cling film with a hole cut near its snout so it could breathe, according to Süddeutsche Zeitung. According to the source, the alligator’s life was in “imminent danger” and the veterinarian offered treatment.

The 42-year-old man traveling with the alligator is suspected of violating local species protection and animal welfare rules, according to the publication.

According to the Süddeutsche Zeitung, he was permitted to fly to Singapore after making a five-digit security deposit and surrendering his cell phone in Munich.

The Straits Times (Singapore) reported that authorities in Munich have no information regarding whether or not the traveler attempted to smuggle the alligator.

The Munich Airport and Munich Customs Office did not reply immediately to calls for comment from Insider.

According to the Süddeutsche Zeitung, customs officials have stated that albino alligators can command prices of up to $75,000 in certain places. One animal expert informed The Straits Times that the animal can be sold on the underground market for up to $1.4 million.

According to the latest World Wildlife Crime Report by the United Nations Office on Drugs and Crime, or UNODC, Asia is the primary destination or transit destination for the illegal reptile trade, with China and Malaysia being the top two countries where live reptiles are seized after being transported from abroad.

Notably, alligators are not among the top 10 species traded on the black market, with only 7.6% of reptiles captured being crocodilians, as reported by the UNODC.