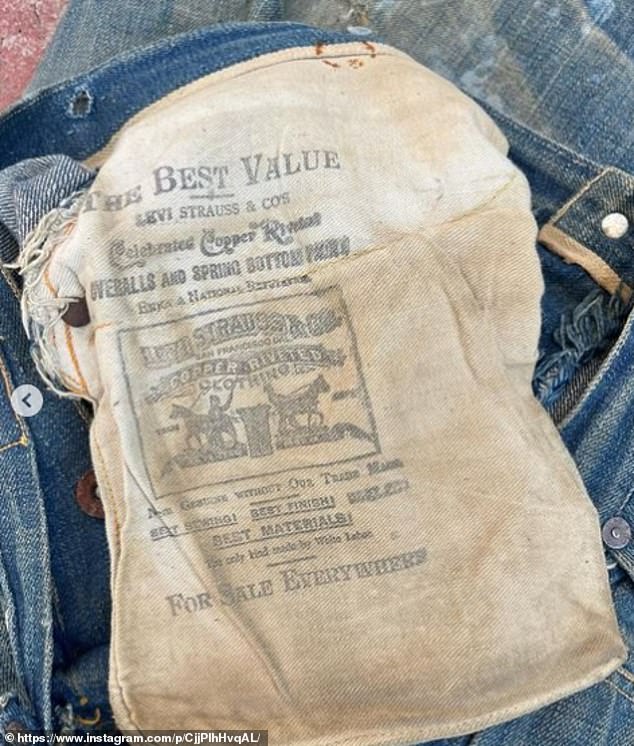 One of the most expensive pairs of jeans ever sold was a vintage pair of Levi’s from the 1880s that was discovered in an abandoned mine in New Mexico and sold at auction for a whopping $87,400.

The pair of pants, which have been dubbed the “holy grail of vintage denim collecting,” were found by denim expert Michael Harris some years ago in an abandoned mineshaft in the American West. They would have been worn by a miner during the real Gold Rush period.

They have a single back pocket, selvedge denim badges, suspender buttons on the waistline, and wax flecks throughout the legs from the former owner’s candlelight work.

He said to the Wall Street Journal, “I’m still sort of astonished, just surprised in myself for even acquiring them.”

Zip Stevenson, a seasoned veteran in the vintage clothes market who will assist Haupert in finding a buyer, contributed the remaining 10% of the winning offer in addition to Haupert’s 90% contribution.

Haupert is depending on Stevenson’s sage advice.

He has seen every conceivable scenario. I have faith in him to attest to their period-appropriate authenticity from the 1880s.

Haupert said on his Instagram page, “These speak for themselves.” One of the earliest pairs of Levi’s ever discovered.

On the auction house’s website, they are described as being in “excellent/wearable” condition, but with a waist measurement of 38 inches and a length of 32, they may not be a suitable fit for every denim enthusiast who is determined to wear such genuine vintage jeans.

The jeans, which are among the first Levi’s from the time of the gold rush, were referred to by the auction site HiBid as “the holy grail of vintage denim collecting.”

To a Starbucks, you may wear them, Stevenson told the Journal.

The jeans still have traces of the era in which they were produced. The inside is emblazoned with the phrase “The only kind manufactured by white workers.”

The expression alludes to the Chinese Exclusion Act of 1882, which prohibited Chinese laborers from entering the US. The expression was dropped in the 1890s, according to the Journal.

Brit Eaton, a second vintage authority who has been selling priceless jeans since the 1990s, was the auction’s seller.

He claimed to have paid Harris, a self-described “denim archaeologist,” $23,000 for the jeans five years before.

Regarding the jeans, Mr. Eaton stated, “I thought they’d be a tremendous attraction.”

Secret Circus Clothing produced the most expensive pair of jeans ever sold for an unbelievable $1.3 million.

However, the 15 diamonds that were sewed into the pack pocket contributed to the price, so the jeans alone probably would not have brought in as much money.