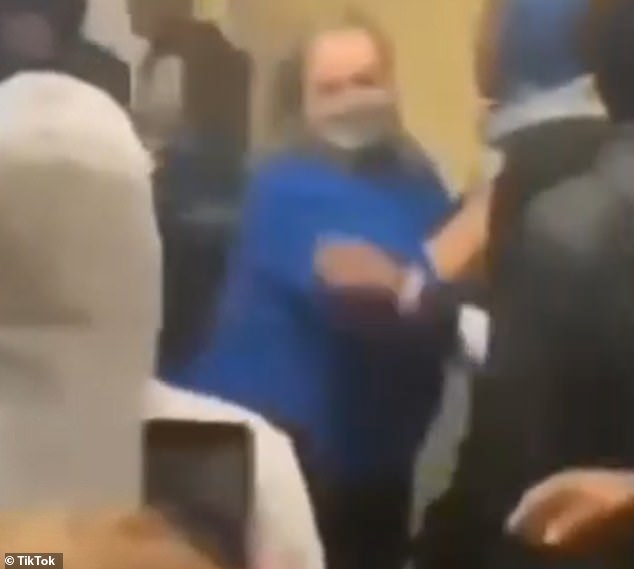 This is the stunning moment a large-scale altercation between kids broke out in the hallway of a high school in Baltimore, which saw the principal get hit while attempting to break it up.

Several Lansdowne High School students were seen on camera fighting violently, with some landing blows on one other’s heads and others collapsing to the ground.

A youngster pushes over the lady in the video who is allegedly the school’s principal before she prepares herself for a punch that is sent her way.

The incident was caught on camera by a cell phone as violence in Baltimore’s public schools is a growing problem, and parents and authorities are calling for a crackdown.

Violence in schools has emerged as a key concern for the Baltimore County Parent and Student Coalition, of which Darren Badillo is a member.

How can our children study while they are in this “fight or flight” phase,” he asked Fox45. How can these youngsters study when they are surrounded by violence, thus we wonder why their grades and competency levels are so poor.

They don’t want to suspend black or Hispanic children, they say. Regarding the schools’ reluctance to hold kids accountable for aggressive behavior, Badillo stated, “They said it’s a route to jail.”

However, if we don’t hold these children responsible in the classroom, we’ll see them in court.

Students can be seen breaking out into groups, grabbing one another by the clothing, and shoving one another against lockers and walls in the footage.

A kid was repeatedly punched in the head with alternating left and right fists while another student laid face down on the floor of the corridor with his arms braced over the top of his head.

Staff personnel made many attempts to stop the fighting, but the students involved were unconcerned by their presence.

The most startling part is when a kid engaged in the fight collapses into a person wearing a blue shirt, purportedly the school’s administrator Allison Seymour, who rushes in to examine the situation.

Before another kid swings violently at her head or another student, she can be seen stooped down and shielding it with her hands.

In Lansdowne, there have been violent incidents in the past. According to CBS Baltimore, a school resource officer was hurt in February while apprehending a youngster.

The Baltimore County Parent and Student Coalition’s recent film was shared online by parents, many of whom have joined a 4,800-member Facebook group.

A other video that went viral last Thursday showed a girl who attends the adjacent Perry High School using a bat to ward off kids who were assaulting her outside the school. That incident took place only a few weeks before.

After the altercation, one individual was brought to the hospital, according to WMAR2.

On October 13, Baltimore County Public Schools will have a virtual town hall to discuss the recent spike in violence.