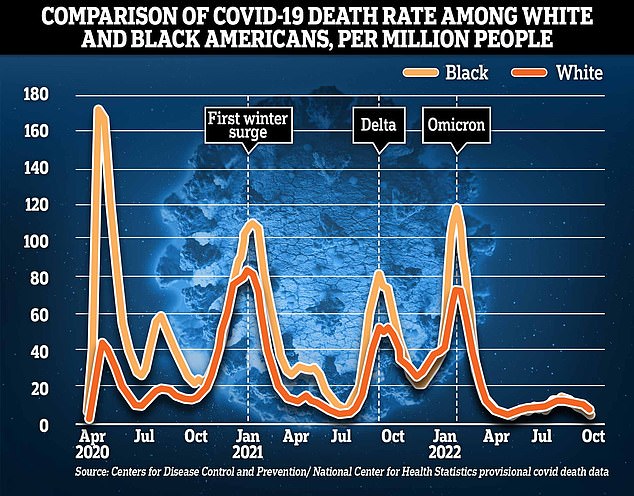 According to a new examination of coronavirus data, White Americans are now more susceptible to dying from Covid-19 than Black Americans.

The change has startled analysts.

It was not anticipated that the disparity in mortality rates between the country’s racial groupings, which has been a distinguishing characteristic of the pandemic for the past two and a half years, would reverse.

Beginning in early 2020, Covid-19 killed disproportionately more Blacks than Whites, a situation that scientists attributed to disparities in healthcare access and the prevalence of underlying health issues.

Inequality in exposure, transmission, susceptibility, and treatment among communities who required the most protection from the virus resulted in Black, Latino, and Native Americans being 60 percent more likely to die from Covid-19 than their White counterparts.

In September 2021, when the Delta variant reached its peak, racial disparities in Covid-19 deaths began to diminish, according to a Washington Post research.

While the number of Black deaths decreased, the number of White deaths climbed progressively until the ratio between the two groups reversed.

According to a new examination of coronavirus data, White Americans are now more susceptible to dying from Covid-19 than Black Americans. Pictured: A graph depicting a comparison of the Covid-19 death rate per million White and Black Americans.

Using data from the Centers for Disease Control and Prevention, the Washington Post claimed to have analyzed each pandemic-related death (CDC).

Early in the crisis, the discrepancy between racial groupings was most pronounced in congested urban centers, where Black people died at several times the rate of White people – citing Memphis and Fayette County as instances.

The disparity in mortality rates changed throughout time, growing and shrinking but never disappearing until mid-October 2021. The death rate among White Americans surpassed that of other groups for the first time during the pandemic.

In the winter of 2021-2022, when the Omicron variety ran rampant through towns and the Black mortality rate once again surpassed the White death rate, healthcare providers in the Northeast were overwhelmed.

As soon as this spike faded, the Black mortality rate fell below the White death rate and has remained roughly equal to or higher ever since.

When investigating why this has occurred, the Post first referred to how Covid-19 functions, and then stated that the transmission of the virus was influenced by centuries of racial and economic disparities that were deeply rooted in the United States long before the epidemic began.

The aged and those with underlying health issues, such as hypertension, diabetes, and obesity, have an increased risk of suffering from severe disease and mortality.

All of these underlying health concerns impact Black populations in the United States at a younger age due to factors such as stress.

Covid-19 swept across the United States during a politically contentious period in American history. Anti-coronavirus measures, such as vaccinations, lockdowns, and mask use, became political flashpoints and a question of identity.

As the epidemic progressed over months and eventually years, the damage caused by the virus – with its various varieties – grew as these disputes grew increasingly contentious.

At the beginning of the pandemic, Black people were more than three times more likely than White persons to die from Covid-19.

There was a ray of optimism during the summer of 2021, when some of the lowest numbers of Covid-19 deaths were recorded as vaccines were rolled out across the nation.

However, the virus evolved, and the Delta variety spread throughout the United States, particularly among those who had not been immunized. According to The Washington Post, this occurred at a time when trust in government, medicine, and institutions was also declining.

This lowered the vaccination rate, so diminishing their social protection.

White deaths surpassed Black mortality for the first time in the pandemic during the pause between the Delta and Omicron waves, and while Black Americans again outnumbered their White counterparts during the Omicron wave, the situation reversed once the greatest Omicron wave receded.

Assistant professor of vaccine research at Ohio State University, Tasleem Padamsee, told the Washington Post that when a ‘health discrepancy’ is described as ‘disappearing,’ it indicates that ‘the worse-off group is improving.’

She stated, “We typically do not mean that the group with a systemic advantage became poorer.”

According to The Washington Post, one explanation for the surprise shift is that many Republicans choose not to be vaccinated and disregard public health recommendations.

Additionally, rural hospital closures took their toll, and many residents grew weary of lockdowns and masks, particularly in conservative states.

In the meantime, vaccine skeptics advocated for alternatives to established Covid treatments, and the usage of masks created a social stigma for certain groups.

Initially, according to The Post, vaccine hesitancy was roughly the same among black and white Americans. However, according to Padamsee, Black communities were quicker to overcome this reluctance and recognize the importance of vaccination.

When the threat posed by Covid-19 to the most vulnerable racial groups in America became apparent, efforts were made to combat racial disparity. Access to and acceptance of vaccines increased among people of color.

White conservatives’ conviction that vaccines and other preventative measures violate civil liberties increased, according to the Post.

As one issue was resolved, another emerged, which partially explains why the disparity between the two death rates has diminished and reversed.

She stated that policymakers must now not only address ‘the accumulated impact of injustice’ on Black Americans and other disadvantaged communities, but also determine how to engage with Americans who are now ‘ideologically opposed to the vaccine.’